The much anticipated fourth stop of the 2016 Swatch Freeride World Tour delivered a spectacular show as riders threw down amazing lines on the remote heli-accessed competition face. The event is now over and competitors are back in Haines despite technical issues that prevented a live webcast of the event. Here are the event results. 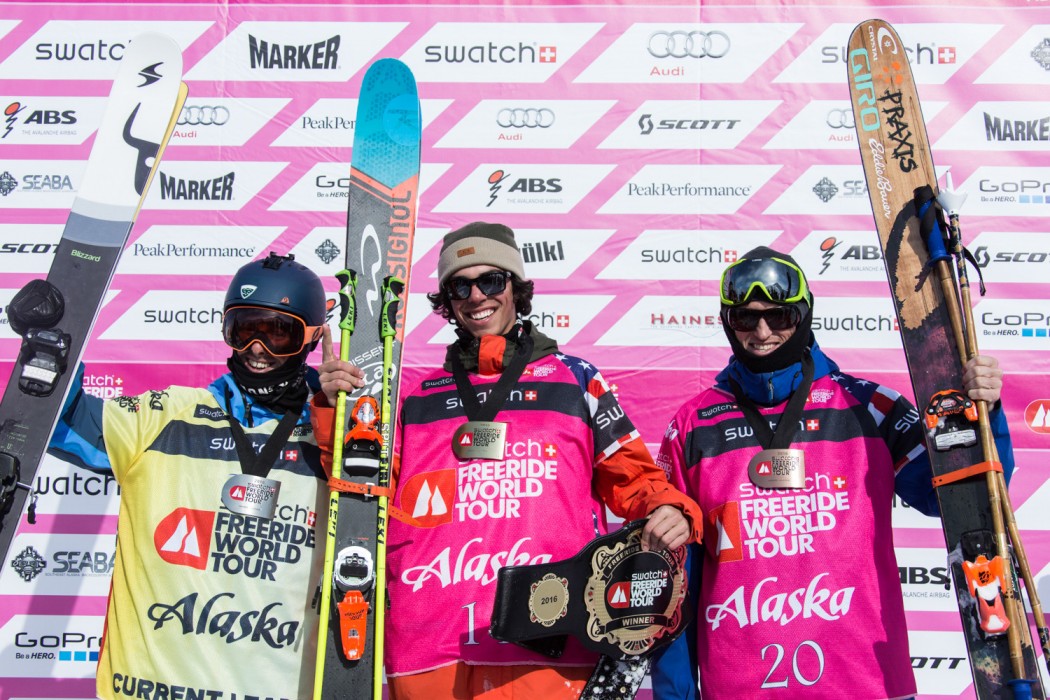 A failure in a communication satellite ultimately prevented a live webcast from the remote competition venue but despite this technical glitch, the beautiful Chilkat mountains hosted a successful event in Haines, Alaska today with near-perfect snow on beautiful spines and a genuine Alaskan ambiance. Sammy Luebke (USA – Snowboard Men) was crowned world champion with high-level riding across the board. A competition replay will be available on www.freerideworldtour.com as soon as it becomes technically possible within a few hours.

Thirty-one of the world’s best riders have made the long journey from Fieberbrunn, Austria to the mountains of Southeast Alaska to compete on the fourth stop of the 2016 Swatch Freeride World Tour. These riders are composed of an elite selection of riders qualifying after the first round of cuts in the Fieberbrunn last week. After several days of waiting through inclement weather, the riders were finally able to catch a first glimpse of the face this morning when they were heli-ported to the remote venue over 30 miles from Haines.

The ENE-facing competition slope in Haines is known simply as “The Venue” and is over 600 vertical meters of pure Alaskan spines, airs, and aesthetically-featured powder fields. The venue is accessed only by helicopter, adding to the remote and isolated nature of this prestigious event. This year, the face was blanketed in an above-average snowpack giving riders confidence to send big lines.

After nearly a week of waiting though low clouds, light snow, and poor visibility, riders were treated to blue skies and a good visibility for the first time this morning. The weather conditions allowed the snow to adhere to the steep spines of the competition face making for picture-perfect riding conditions in consistent, velvety Alaskan powder.

Ryland Bell (USA – 1st) is name that resonates hard with the Alaskan snowboard scene – the wild card holder and hometown shredder devastated the Alaskan face with two huge 360s and a visionary transfer that put in him in first place. However, the big news of the day was the well-earned title of world champion secured by Sammy Luebke’s (USA – 2nd) run which featured his trademark 360 and buttery-smooth riding. Unfortunately for the gorilla-suit clad Flo Orley (AUT – 3rd), his boss line terminating with a huge air was nullified by a small crash at the bottom of the venue, leaving him with third place.

It has been a strong season for rookie Logan Pehota (CAN – 1st) as he has consistently merged freestyle innovation with classic hard charging – today was no different as he secured first place with a line featuring a stylish 360 combined with technical mastery. When it comes down to big lines, it was business as usual for Loïc Collomb-Patton (FRA – 2nd) as he crushed an aggressive start into a huge 360, but his 2nd place finish was not able to guarantee the title of world champion until his final trial in Verbier, Switzerland. Finding a spot on the podium has proved elusive for Drew Tabke (USA – 3rd) this season but his typical innovative line selection and massive backflip secured his third place finish and Verbier qualification.

The ongoing feud for world champion between the two Swiss riders Anne-Flore Marxer (SUI –1st) and Estelle Balet (SUI – 2ND) was not settled today despite Marxer’s creative line choice and Balet’s authoritative charging of a direct line on the face. Rookie Marion Haerty’s (FRA – 3rd) powerful riding through the steep upper headwall would have placed her higher on the podium if she had managed to stay on her feet through a high-speed exit on into the lower part of the venue.

Eva Walkner (AUT – 1st) is one step closer to earning her title of world champion today by employing her tried-and-true method of powerful charging topped with a sizeable air. Matilda Rapaport (SWE – 2nd) had her finest finish of the season with a line that not only demonstrated technical mastery of the Alaskan terrain, but also featured an impressive air. Arianna Tricomi (ITA – 3rd) bit off slightly more than she could chew with a line that featured some of most consequential airs of the day but lacked an overall impression of control due to a backslap at the bottom of her line.

Out of the 31 riders competing in today’s event, only 28 will make the cut and move on to the season finale and world championships on April 2nd. The best three results of the 2016 FWT season will determine which riders make the cut and have a chance to go for the title of world champion in the final event at the Swatch Xtreme Verbier.

The Haines event is always one of the most anticipated events on the FWT because the Alaskan mountains offer some of the highest quality freeriding in the world. Today’s competition was a fine example of how the top riders on the planet can take advantage of these fabled mountains to raise the level of the sport and produce a competition of the highest caliber. To review any moment of today’s action check our the live replay as soon as it becomes available on www.freerideworldtour.com.

The exciting conclusion and grande finale to the 2016 Swatch Freeride World Tour is going down in less than two weeks at the Swatch Xtreme Verbier! Be sure to witness the most important freeride event of the year by tuning into the live webcast on April 2, 2016.