For 17 days this past spring, Dan Evans and I, along with Iqaluit-based friends Patrick Bruce and William Hyndman, went ski touring in Baffin Island in the Sam Ford Fjord zone in Nunavut. The area is a playground for world-class couloir skiing, but we were pretty new to the expedition scene… so what could possibly go wrong?

1. The Arctic is an unforgiving place. 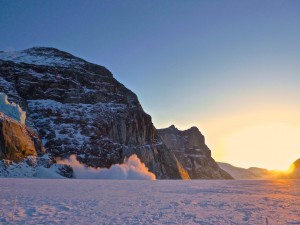 The average temperature during our first few days at sea ice was -30C. My hands turned an interesting colour after losing feeling in them one day and Dan got frostbite on his toes. In case of a polar bear encounter, a rifle, bear-bangers and an electrical perimeter fence were on our gear list. On two separate occasions, a serac broke off a mountain and crashed on to the sea ice within a kilometre or so of us. While we were boot-packing up a small chute on Great Cross Pillar, a rock broke off the mountain and descended on us (we pulled the pin on the objective after that). We relocated from a potential campsite due to polar bear tracks and a seal hole, and a blizzard that lasted three days – a short period of time by Arctic standards – held us back in Clyde River on the way back to the mainland. Baffin life.

2. Everything is far away. 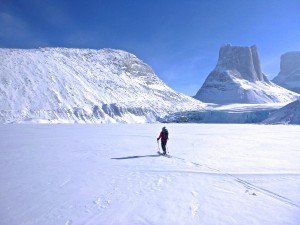 I didn’t need my passport, but I went through six different airports – Calgary, Toronto, Ottawa, Iqaluit, Pangnirtung, and Clyde River – followed by a turbulent 5-hour qamutik (Inuit hauling sled) ride to get to our first campsite at the base of Polar Sun Spire. The only efficient way to do it was to set up camp, session that area, and move camp to another location in order to access different objectives. It was easy to look across the fjord at something and say, “Let’s ski that!” but then realize it was kilometres and kilometres away. I’ve never been so arrested by the scale and magnitude of a place. We felt small. 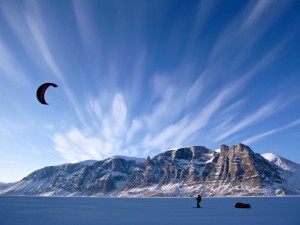 Because everything is so far apart, we turned to kite skiing as a mode of self-propelled transportation and also as a down day activity. Pat and Willie have been kiting on Baffin for years, so it was great to have their tutelage and equipment. Since I had never tried it before, I thought it was going to be like water-skiing. It’s actually more like sailing as we tacked up and down the fjord, zigzagging from place to place. Sometimes the wind was fierce enough to pick me up and drop me like a sack of potatoes. Other times, it left us motionless and waiting in the middle of the fjord. 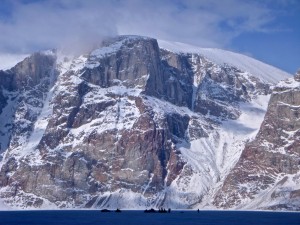 Sam Ford Fjord truly is in the middle of nowhere. So remote that you have to do your own forecasting and if something really bad happened, the closest heli evac would likely come from somewhere in the Maritimes a couple thousand kilometres away. That being said, we weren’t really alone because we saw seals, Arctic fox tracks, some unknown bird poop, and the cutest baby polar bear who really didn’t seem all too phased by our round of flares. Since this particular fjord is part of an Inuit hunting snowmobile route, there were a few instances where local hunters stopped to chat with us, rather impressed that we were spending time “on the land.”

5. Polar Star is possibly the best skiing couloir in the world. 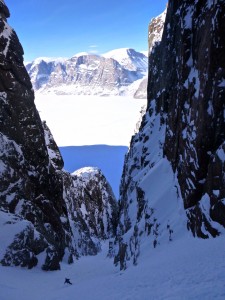 I’m going to have to agree with Andrew McLean’s description of it. To be fair, my personal experience of skiing couloirs leading up to the trip didn’t extend beyond the Rockies or Rogers Pass. So I can’t say categorically that it’s the best ever… but it was pretty f$%&ing amazing. 1100 metres at 45-50 degrees of initially easy climbing over hard pack, finishing with a sufferfest of wallowing in unsupported snow to top out onto a beautiful col. Surrounded by massive and ancient rock walls, the descent was a combination of slough management and the most amazing and exhilarating powder skiing of my life. There’s a reason why it’s in 50 Classic Ski Descents of North America.

This expedition was made possible through a grant from the Jen Higgins Fund of the Alpine Club of Canada. We’d also like to thank MEC, Helly Hansen, and Yamnuska Mountain Adventure’s Backcountry Kitchen.