Backcountry Problem Solving with the Volkl Crew at Sunrise Lodge

High up in BC’s Selkirk mountains at Sunrise Lodge, fire blazing as we sat down to a dinner of homemade pizza and salad after a full day of hiking and skiing waist-deep powder, a growing sense of unease crept over our group of eleven as we realized the unavoidable truth.  Only three days into a week-long hut trip, we were nearly out of beer.  Buried surface hoar we could deal with.  But this?  This was unacceptable. 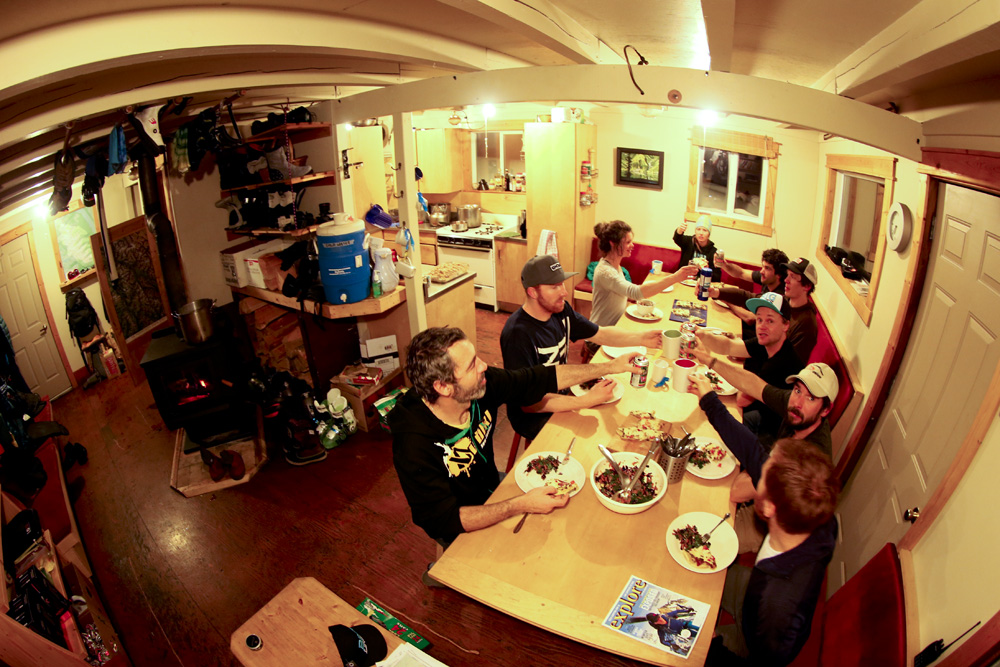 A hearty, if uneasy, cheers with the dwindling beer supply.

The Sunrise Hut sits on the edge of, uh, Sunrise Lake, near treeline, 2150 meters up in the Esplanade Range near Rogers Pass.  At first glance, when Christina Lustenberger, myself, and my husband Jim flew in on an overcast Sunday, the terrain appeared rolly and fun…some treed lumps with mini golf above the lake and a ridge extending into the clouds to the east. 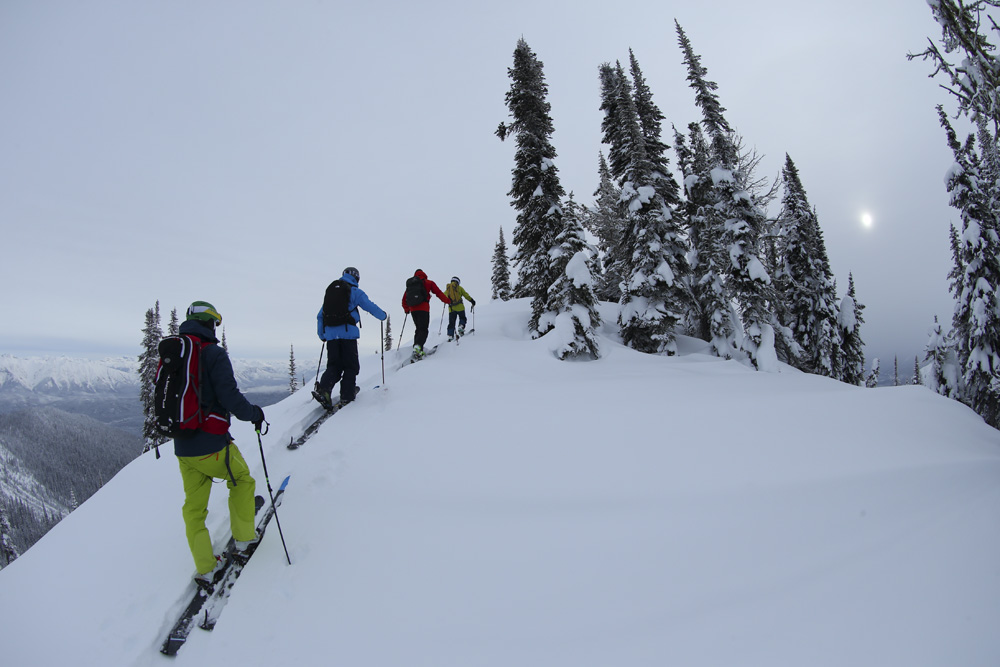 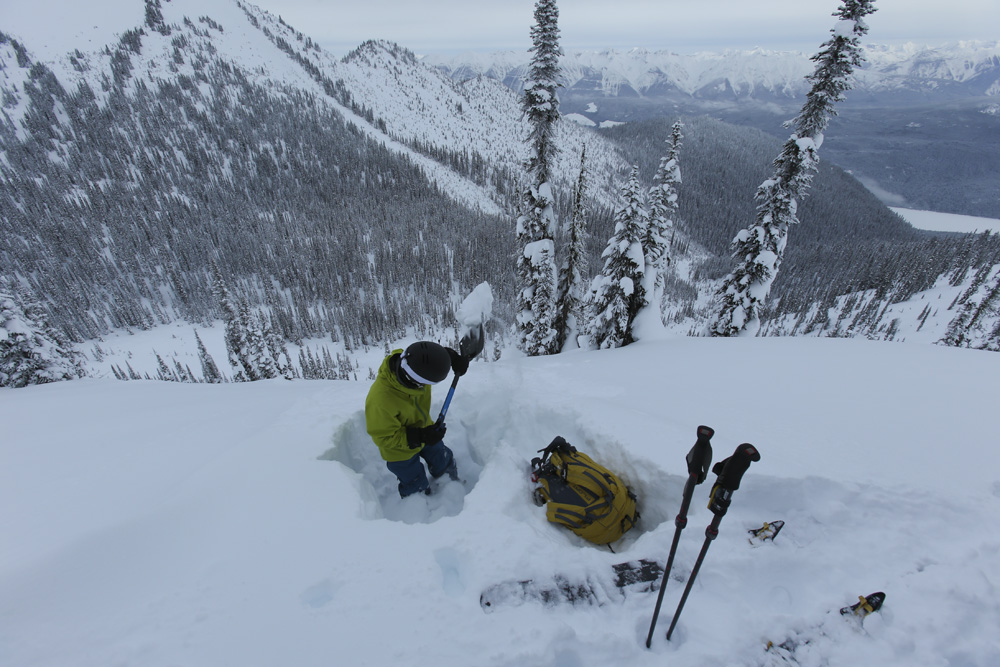 Stian Hagen, sniffin’ through the snowpack for surface hoors… 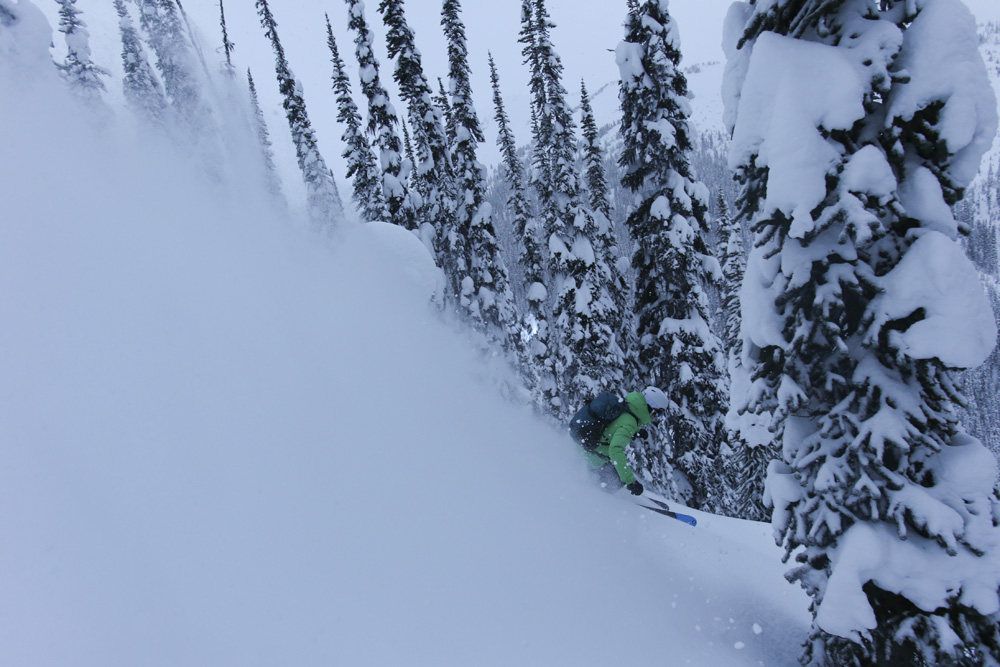 Christina Lusti, keeping it safe, smooth and snowy in the Sunrise trees… 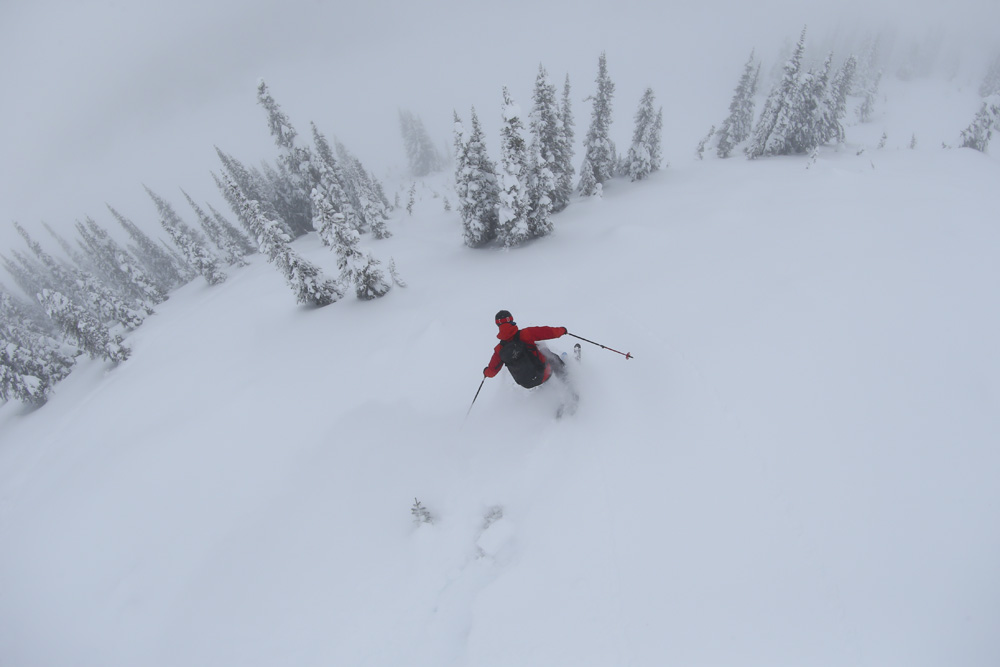 Christina led the charge on the skin track and in the kitchen, an impressive effort including homemade apple and berry crisps every night, fresh rosti and french toast in the morning. She also whipped up curries, Mexican yam wraps, and steaks for dinner.  The hut itself is downright luxurious: separate sleeping rooms upstairs, a fully appointed kitchen, solar-powered lights, and a wood-fired sauna and shower. 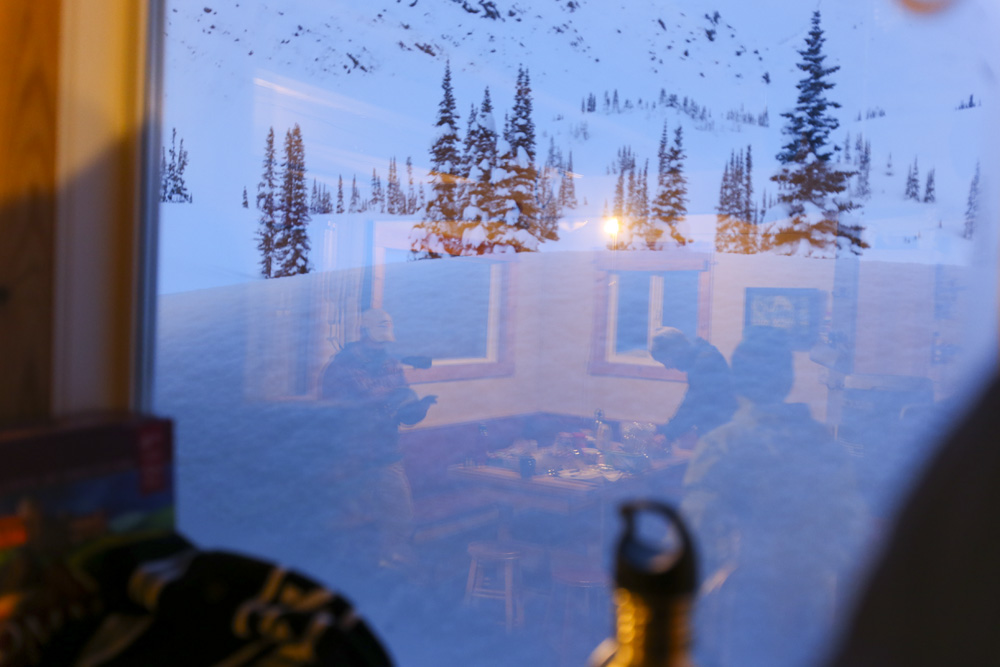 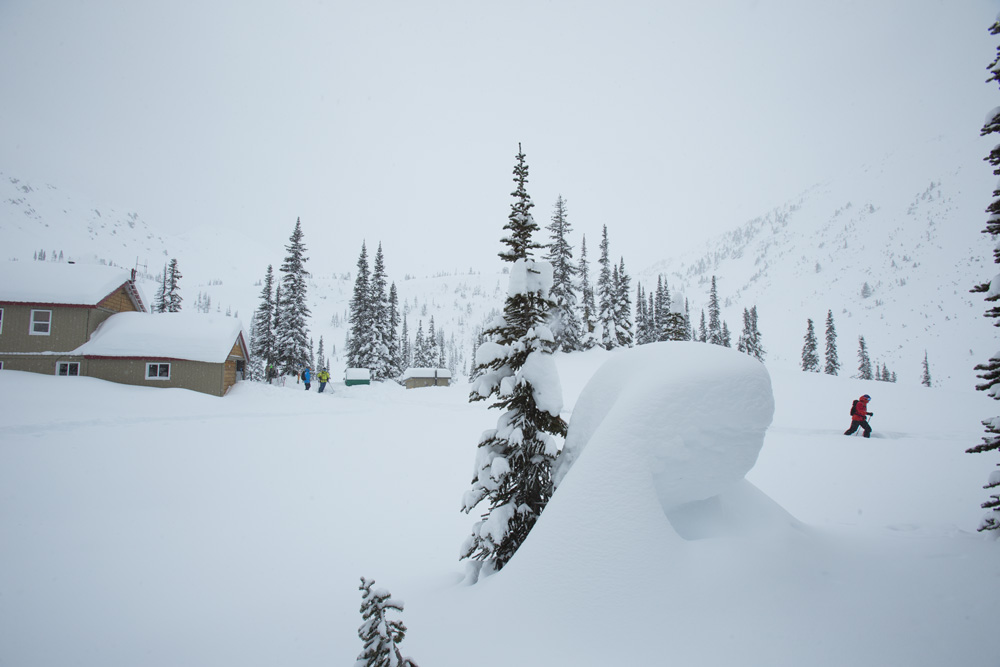 The Kingpins proved to be like the terrain surrounding the hut.  Both were super intuitive right from the beginning; we stepped out the door into instantaneously awesome skiing, and the more familiarity we gained, the better the enjoyment. 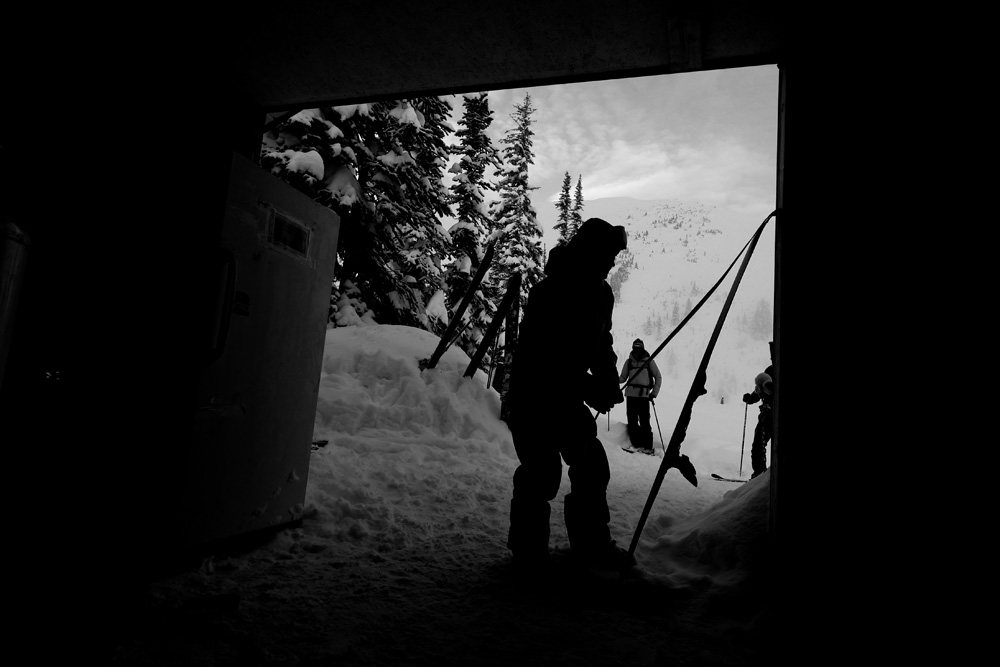 Wake up, mount up and roll out…..self-propelled skiing in one of its finest forms.

For the first few days, it snowed on and off and we lapped the trees blissfully, finding small pillows, Austin and Ian built kickers, and no one got caught in any avalanches.

It felt like a dream come true—Stian even mentioned wanting to move in.  Then we discovered the beer problem, and panic set in. 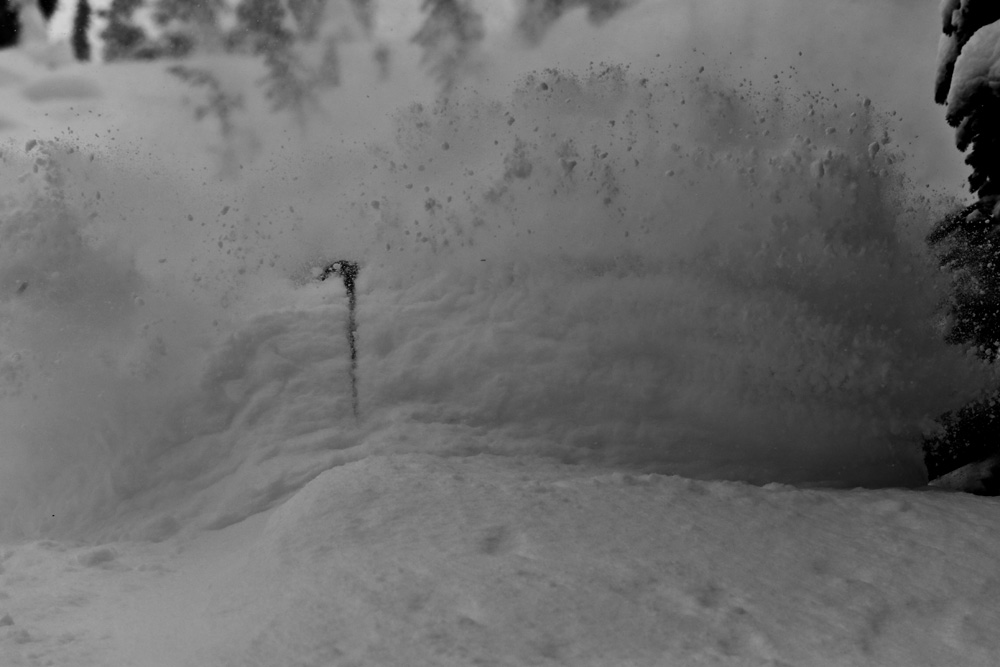 Stian Hagen, lost amongst the offerings of the Esplanade Range. 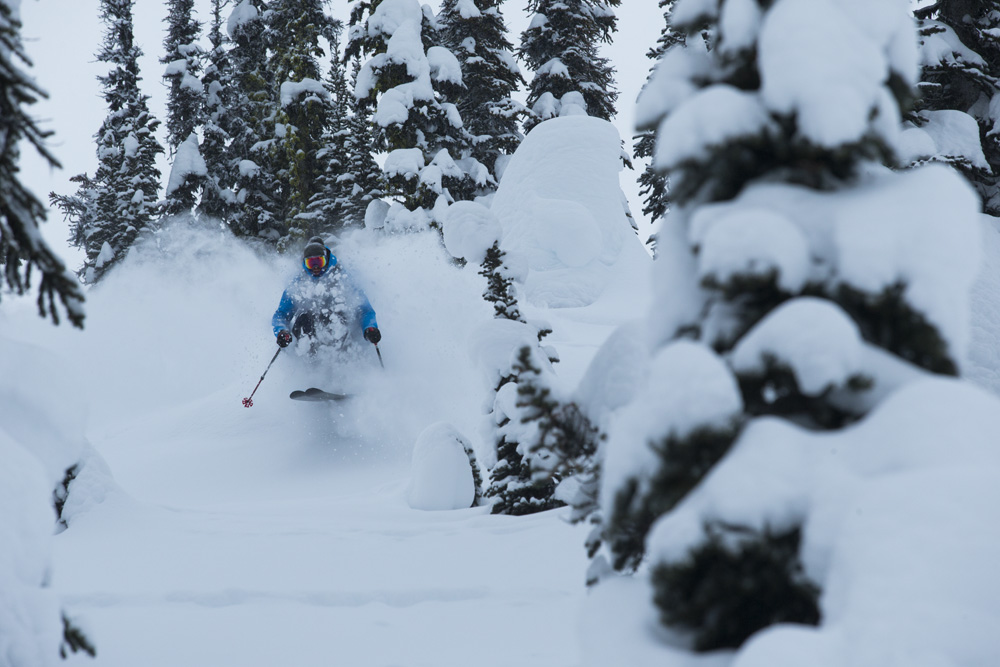 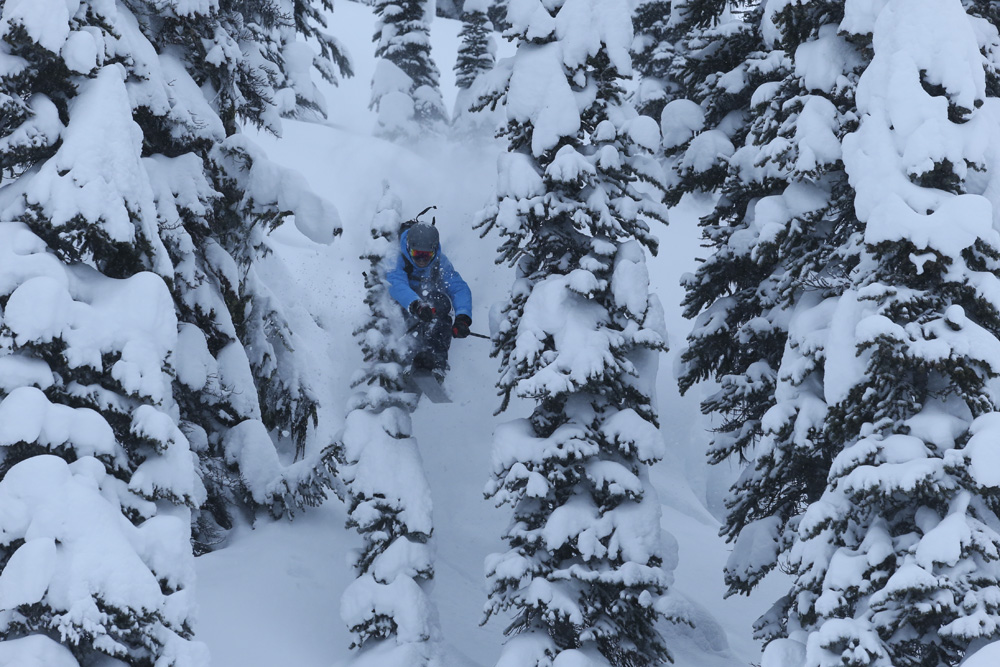 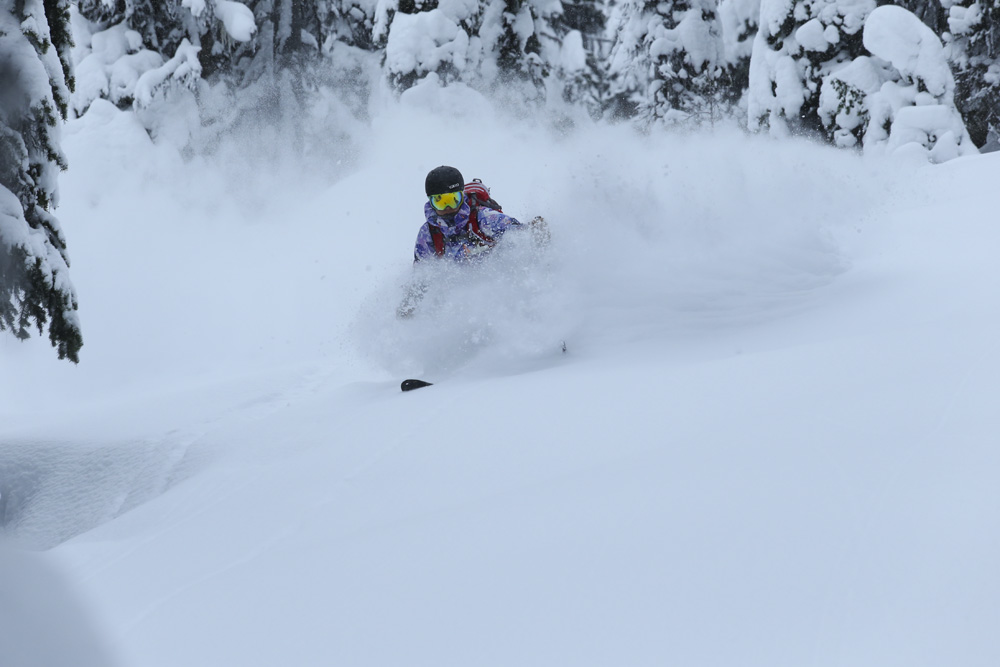 Ingrid, trying to distract herself from the crisis unfolding back at the lodge.

Luckily, our hutmaster, a badass Canadian skier named Martin Lefebvre, lives in Golden and has good connections at Biglines, purveyors of all things good.  Within a day, while we were out shredding, he had arranged a heli drop (the bird was already on its way to a nearby lodge) of beer, Creamo, and cheddar cheese…just the necessities, of course.  We relaxed and settled into full enjoyment of our surroundings. 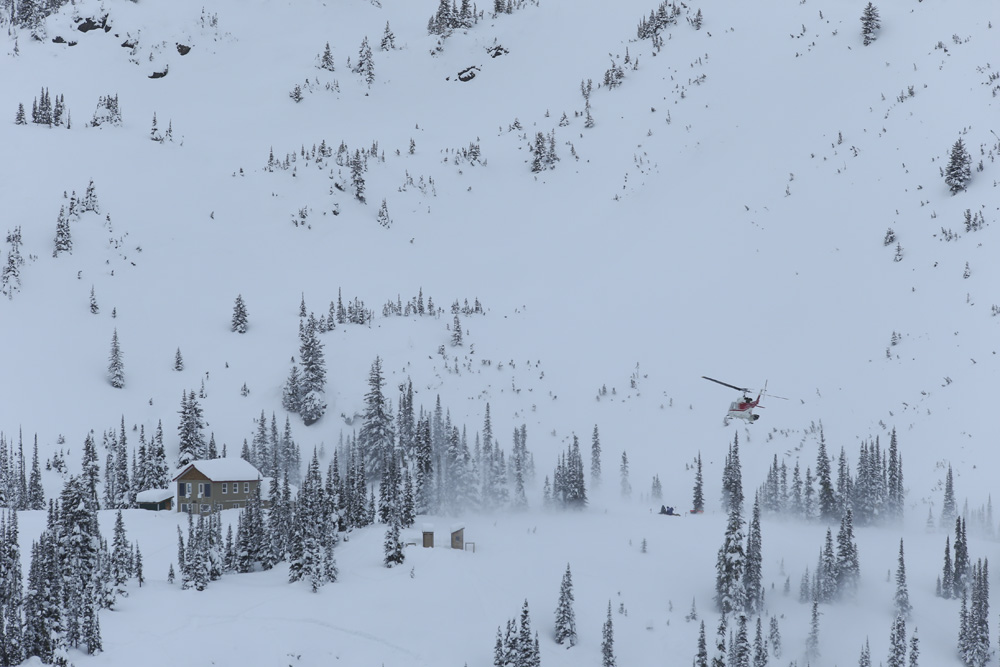 Hey that better be Pilsner eh!

Wednesday, the sun rose to partially clear skies, and we skinned up into the alpine in hopes of a full clearing.  The higher we got, the more the skies opened, and the full magnitude of the mountains knocked us upside our heads.

The splendour was shocking, even to people who spend most of their lives in the mountains.  The sea of clouds below on the Columbia Valley, the Rockies in the distance, and the early winter light stunned us into uncharacteristic silence. 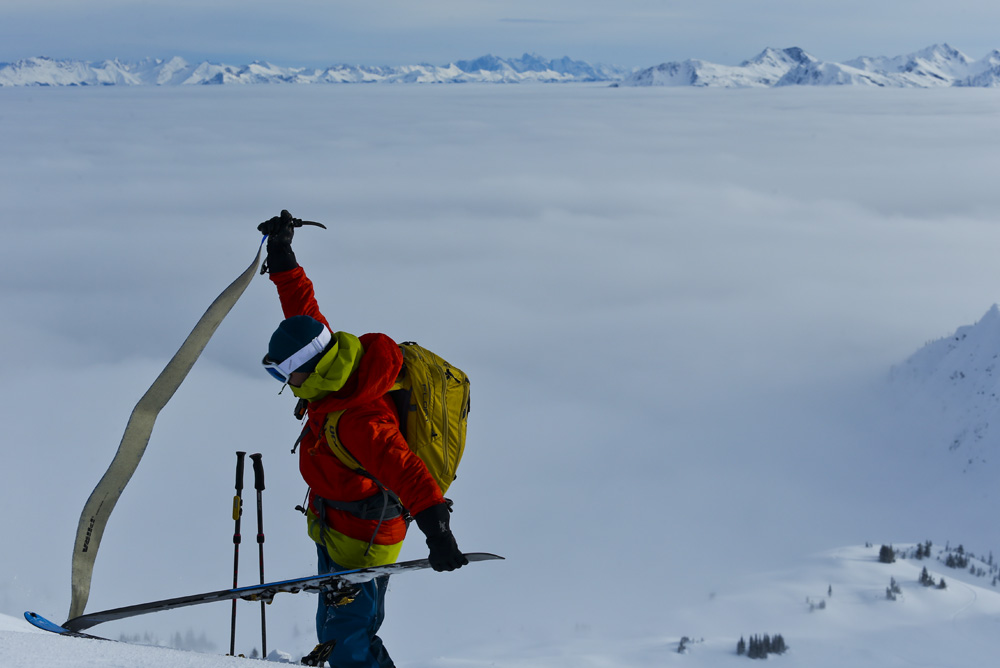 “The sea of clouds below on the Columbia Valley, the Rockies in the distance, and the early winter light stunned us into uncharacteristic silence.” 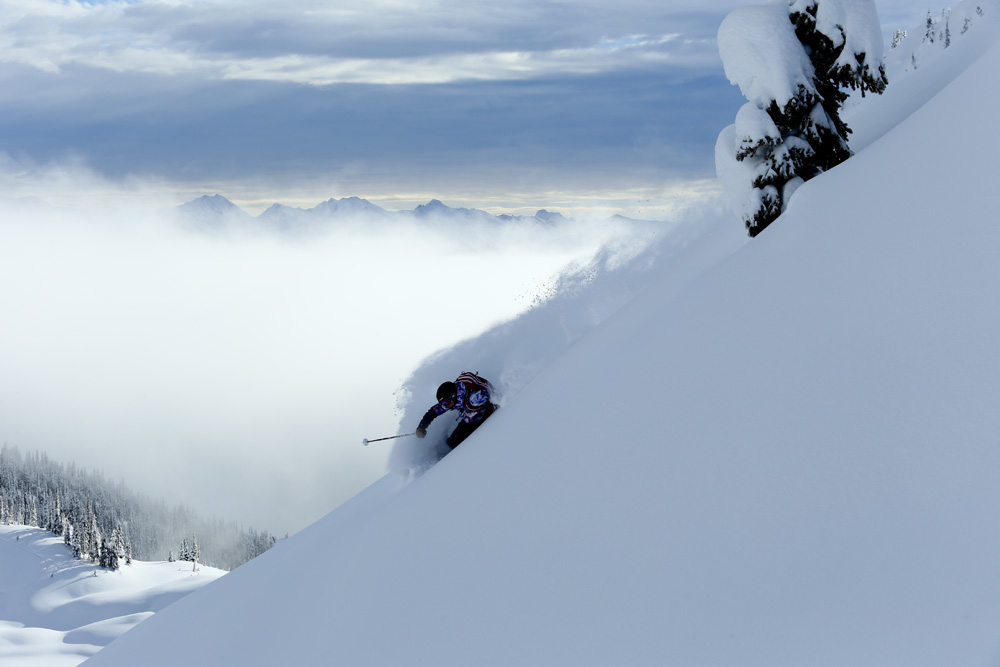 We were tiptoeing due to the avalanche conditions, skiing low-angle slopes, but the scenery was so gorgeous it didn’t even matter. 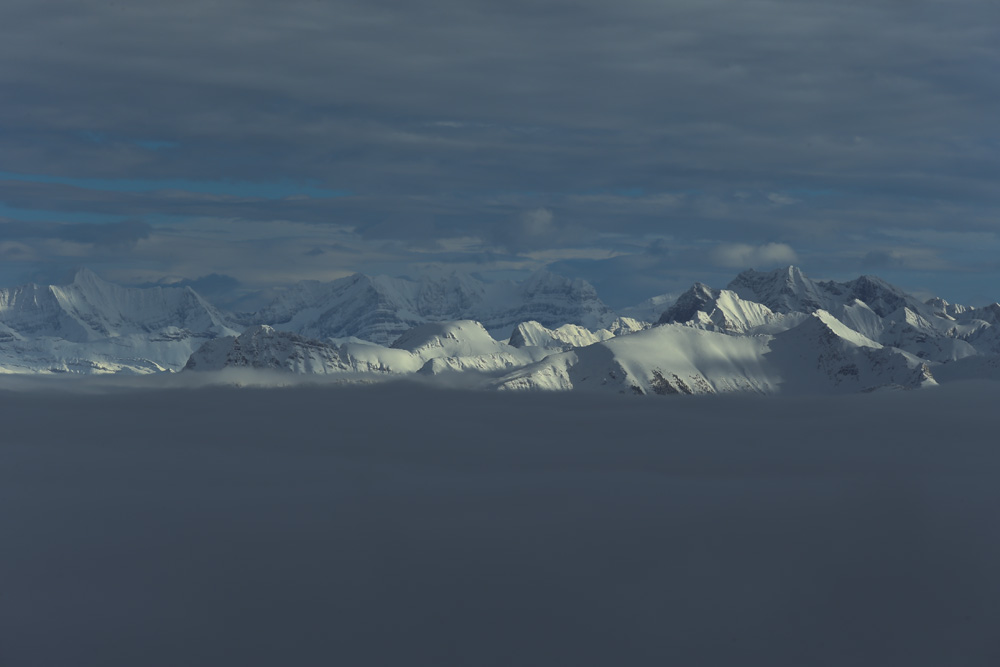 That night we skinned up a few hundred feet in jeans under the full moon for Kevin’s birthday, howling and dancing before skiing silky pow back to the hut in walk mode (at Kevin’s insistence). 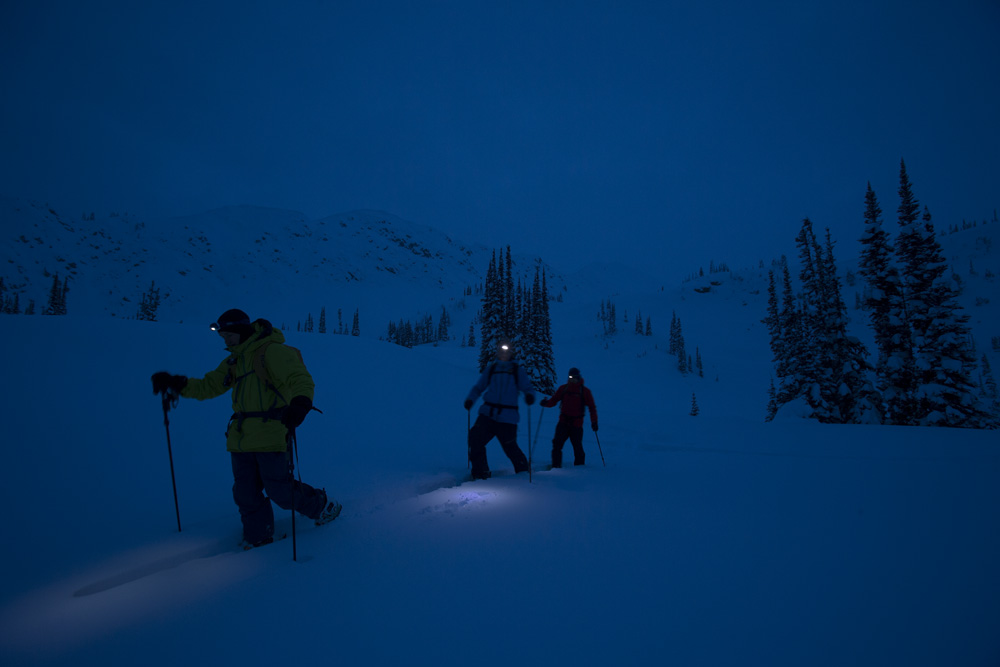 Another partially clear day allowed us to session the mini-golf benches above the lake, and our last day we woke with tired legs to a thick fog.  Austin entertained us with guitar songs and a bizarre routine involving his hands down his long underwear. 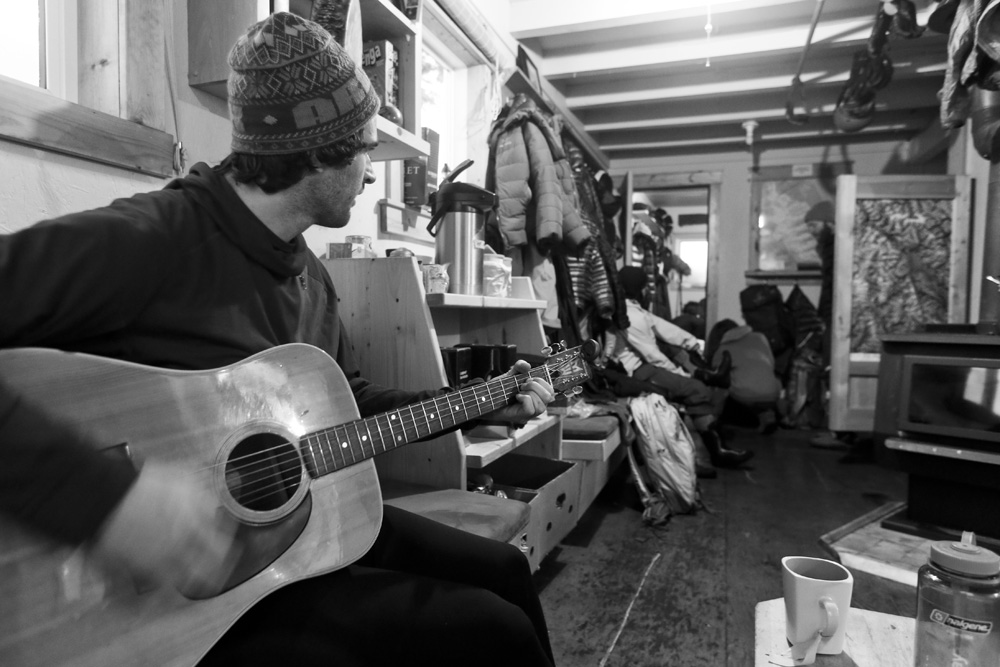 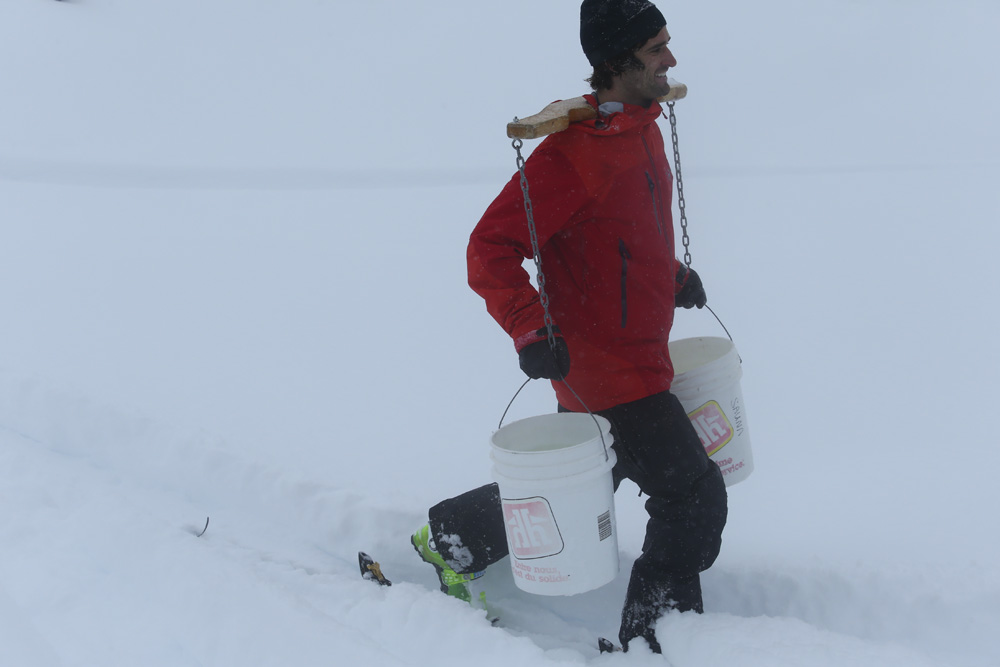 And then by late morning, we finally motivated to push up into the fog and get some turns.  Suddenly the call came from Ian up ahead on the radio.

“It’s amazing up here you guys—the most unbelievable sea of clouds.” 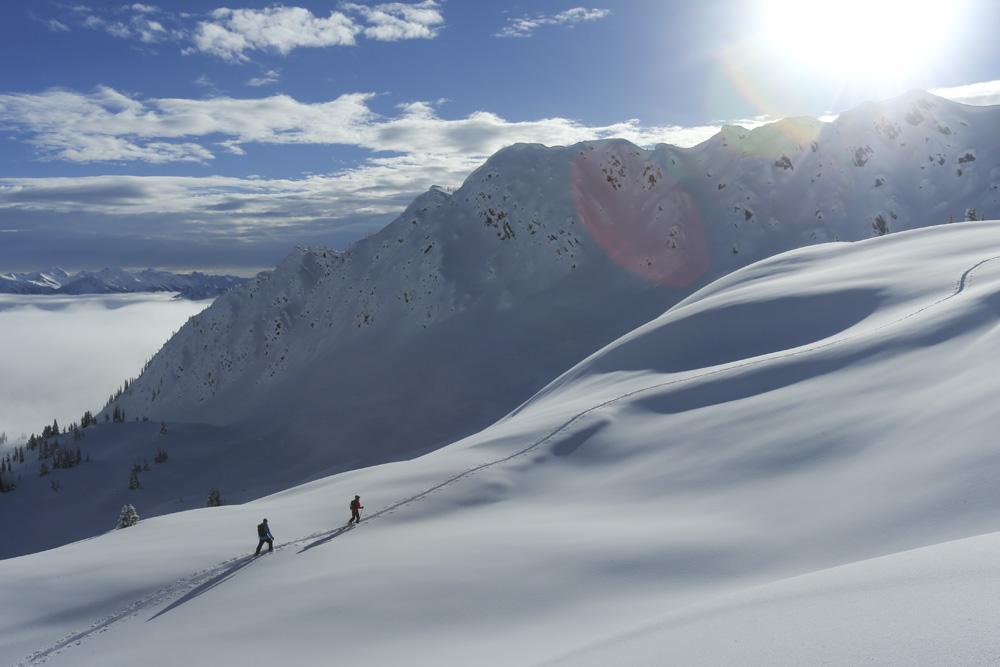 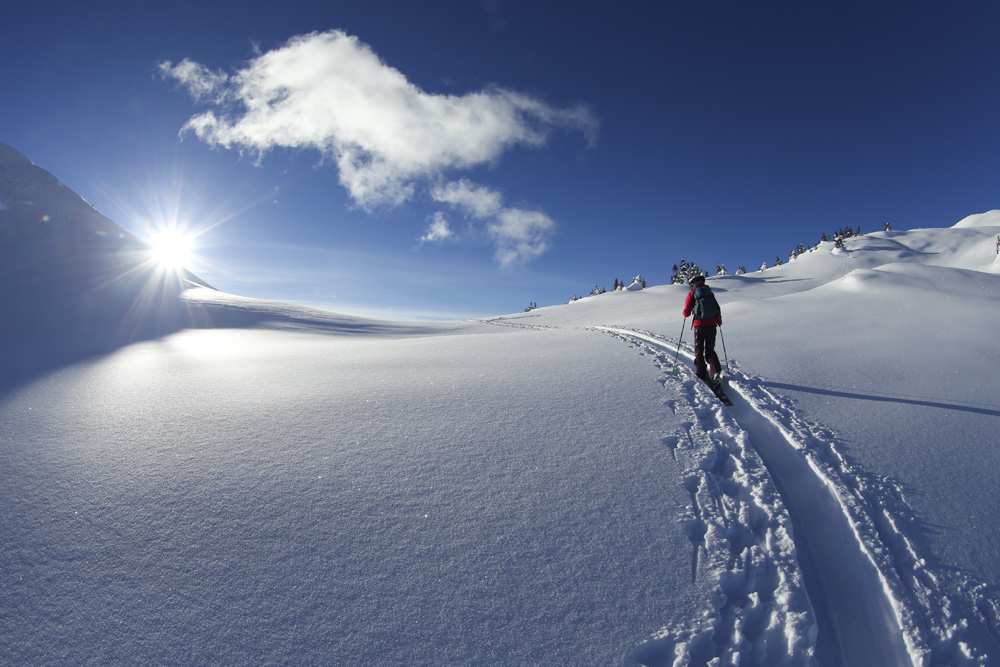 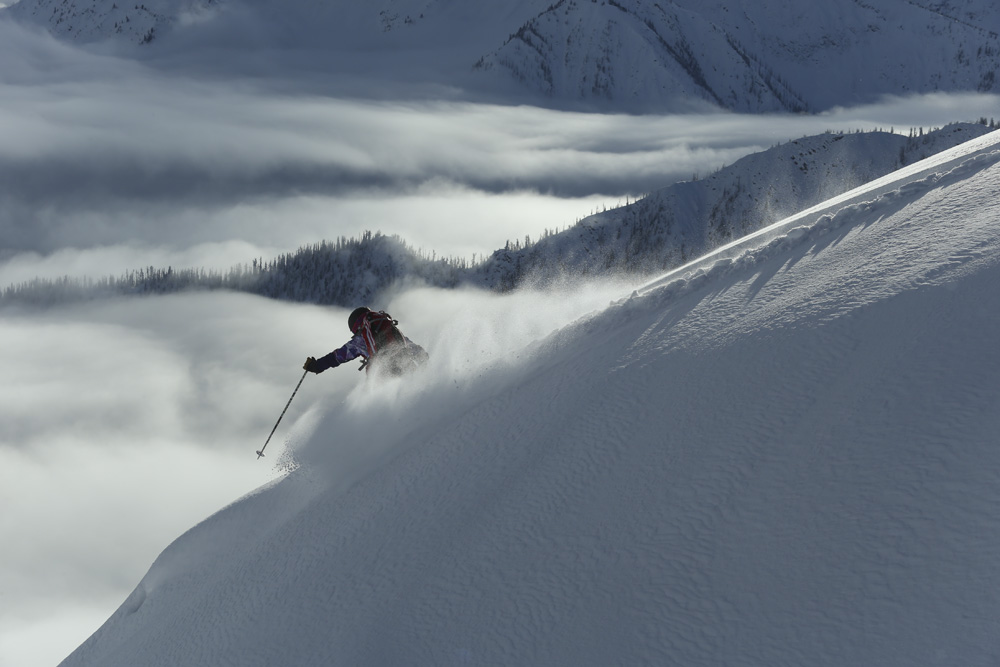 Ingrid, sailing the sea of clouds… 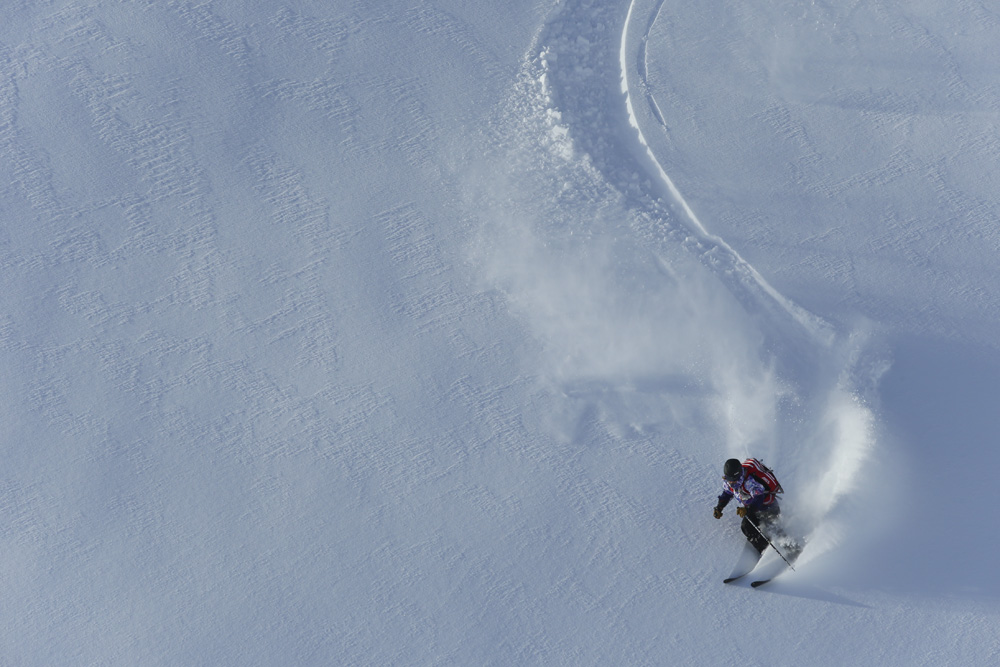 …on a vessel of silky Selkirk pow.

We finished our lap in the trees and eagerly pushed upwards, above the lower layer into the glorious alpine.  Some skied a couloir, others enjoyed a long lunch on Corn Peak, and Stian, Christina, and Martin set off to summit nearby Cupola Peak, the highest in the range. 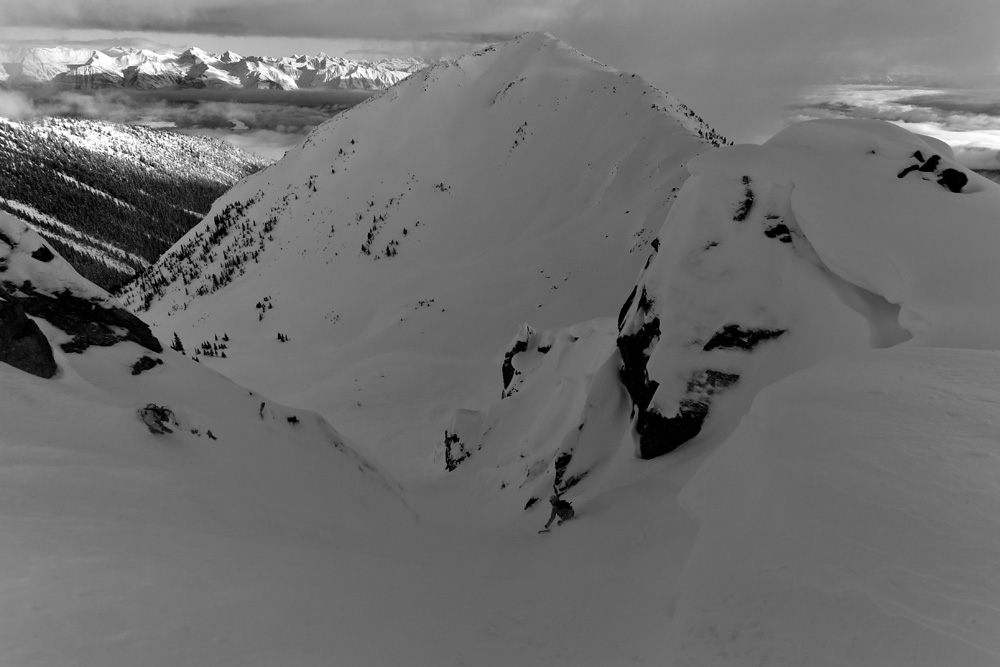 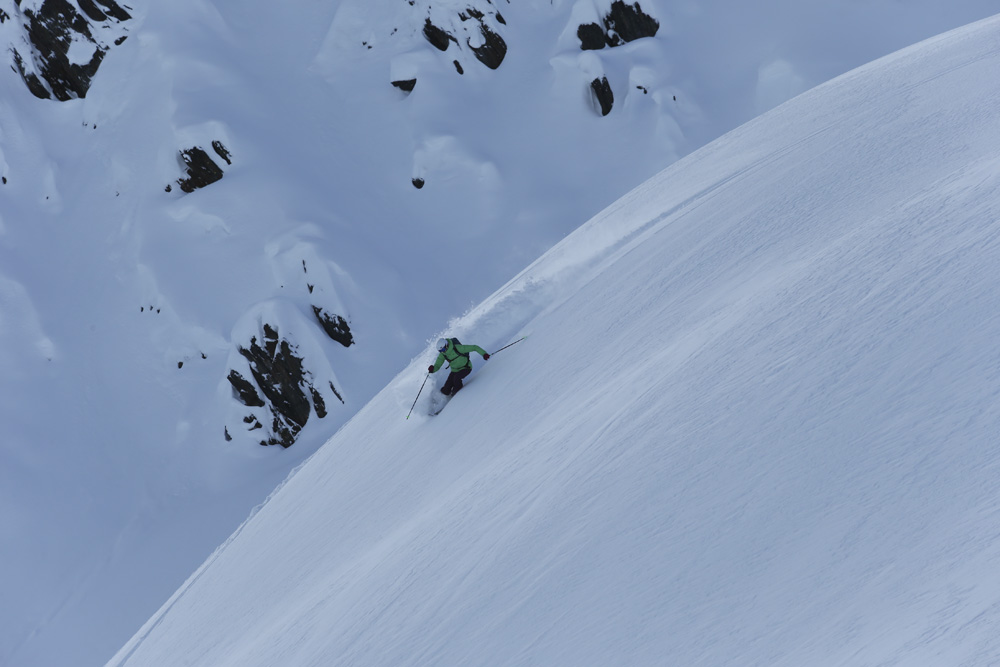 …and draw some nice lines in the sun. 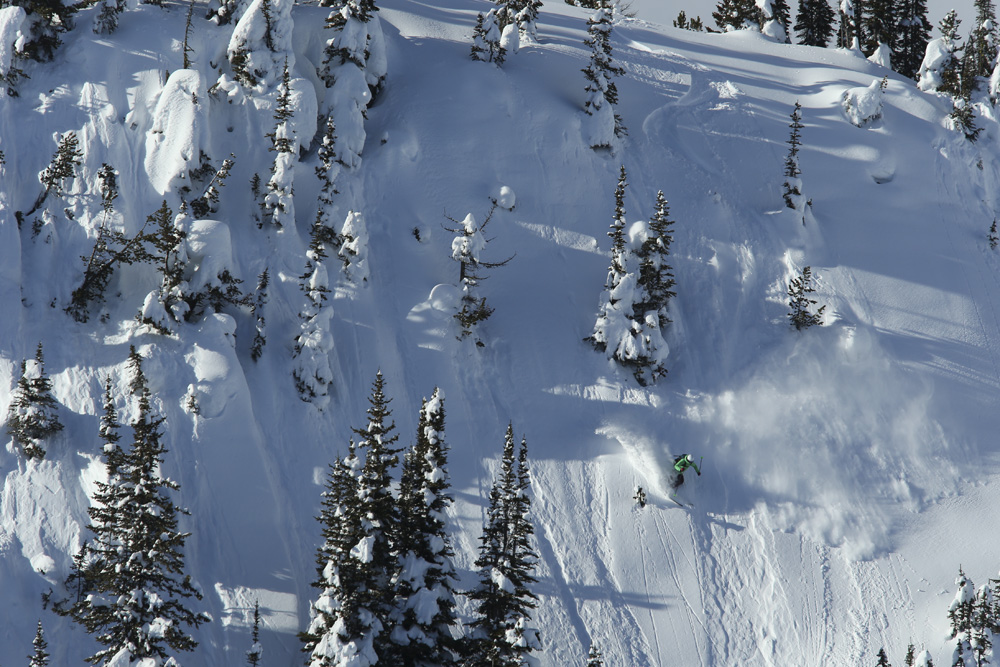 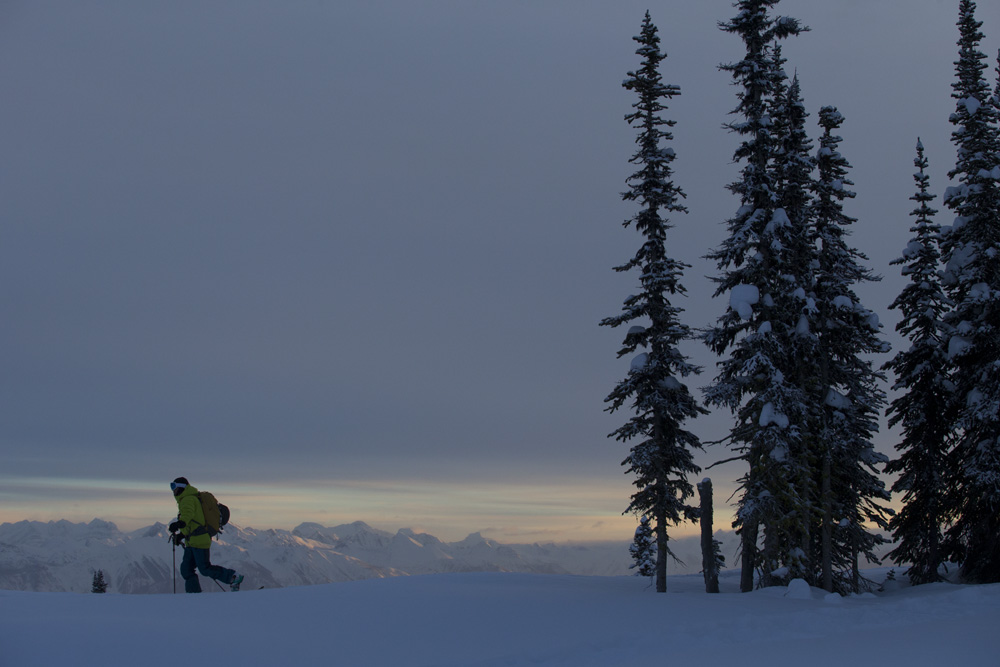 In every direction, all we could see were peaks, sky, and the cloud layer.  The layer lifted for just a minute, and we glimpsed the hut way down below: our own little temporary home in paradise, one long powder run away from a fresh supply of cold beer. 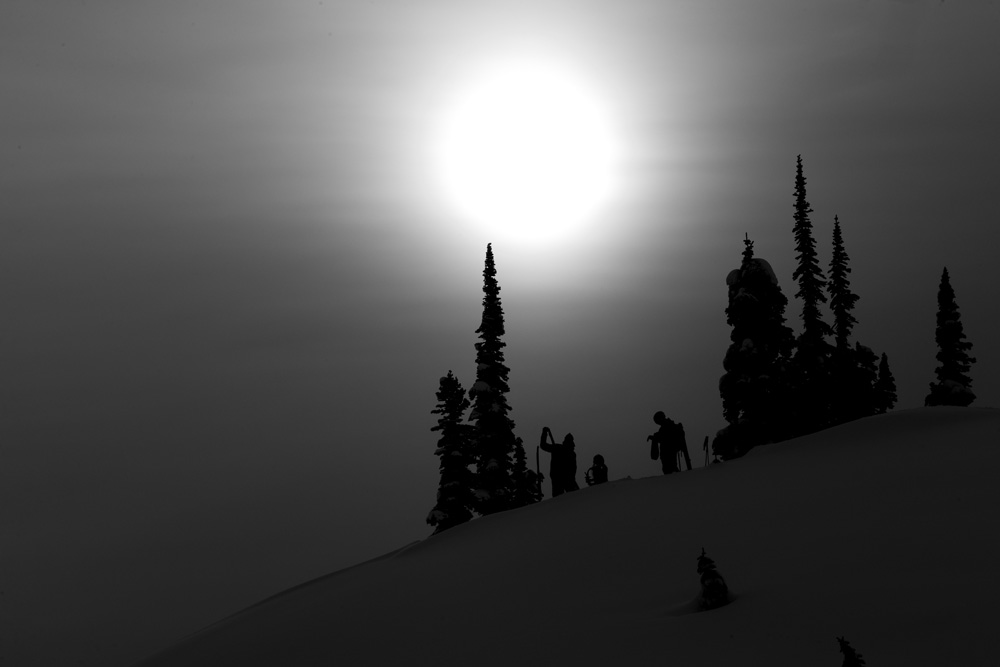 “We told him Pilsner, right?”

Find out more about the Kingpins and BMT 122’s at http://www.volkl.com/

And check out Golden Alpine Holidays at http://www.goldenalpineholidays.com/

And so does Adam Clark: http://www.adamclarkphoto.com/

Austin Ross too! He’s got more tasty pics from the trip at http://www.austinross.ca/