Mt. Sir Sanford is the highest peak in the Selkirk range in the interior of Canada. The Selkirks, as most know, are the one of the most amazing places in the world to ski. It’s therefore surprising that the highest peak in the range, which has a massive south face that can be seen on a clear day from just about every summit in the range had not seen a descent. Many wanted to do it but it is only this year that a crew with the right combination of skill, motivation and timing managed to get it done.

It must be celebrated that this major tick was done in good style and by a crew that combined Revelstoke and Golden locals. This is an email interview that I conducted with Doug Sproul about the line. 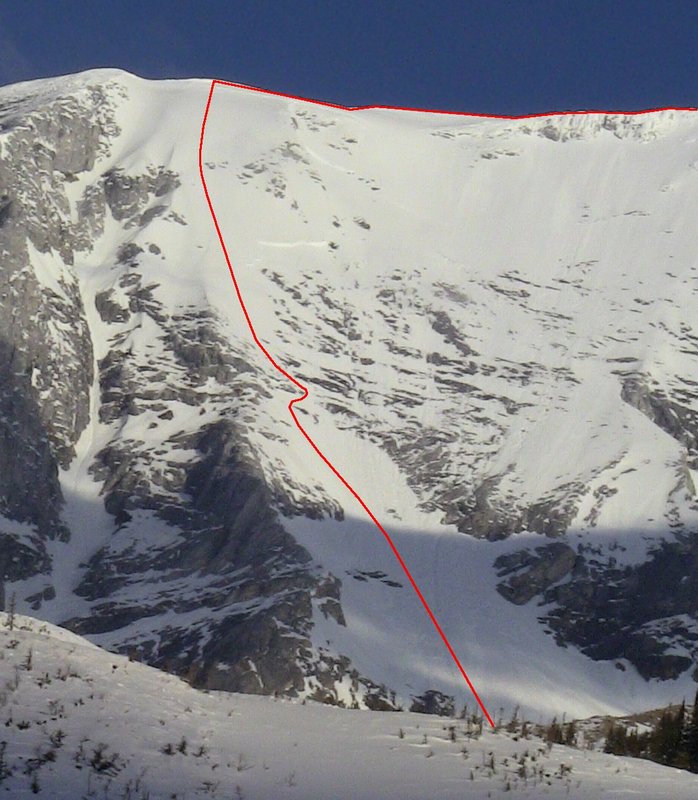 Tim: How did you guys get in there?

We like helicopters; we use them a few times a season, mainly for celebratory heli-drop days, just for fun.

We felt that Sir Sandford deserved more of our respect. Almost everyone flies into Sir Sandford. We wanted to do it on our own, unsupported. So we approached from the ‘wet side’ (Revelstoke), up the Goldstream River where Rob and I spent most of the summer brushing season. We were able to drive in to 14 km and then a long sled in 33 km to the base of Moberly Pass. It was cold but we love to be cold.

This was the second attempt. Rob Martin and I were here with the full moon of December, 2011 but a thin snowpack worked us into submission. It took us 9 ½ hours to go 4 km, a personal record! Slog, slog….It was pretty brutal.

So now we were back and we thought we had the route dialed so we left the sleds and walked up the creek, la-la-la…Turns out it was the wrong creek and Moberly is a confusing area, whoops… We accepted the fact that we were actually disoriented and set up Camp I about 300 meters from the sleds having backtracked to where we were sure of where we were. The evening was spent hydrating and fuelling with water, whiskey and Jiffy-Pop.

In the morning we left Camp I and two of the team members behind. One had a bunk binding and the other just wasn’t into the long approach or something. So we started out with five and now we were three, the magic number.

So with multi-day packs stuffed with lots of scotch, sausage and butter we slowly began the 13 km march over Moberly Pass looking to once again connect the Goldstream River FSR with the Gold River FSR, the wet side to the dry side.

The only thing that sucks more than touring endlessly on flats is touring endlessly, slightly downhill. Our feet hurt but we pushed the km’s that day and into the night under the moonlight and set up Camp II under the biggest avalanche path in the Gold River; the south face of Mount Sir Sandford.  Touring through Moberly under a full moon was a memorable experience to say the least. An experience we would have missed had we taken a helicopter to the base.

It took 4 nights/5 days. Of course we could have done it faster but as I get older that part of me doesn’t care so much. I used to be so fixated on time but for this trip it felt good to actually bring more goodies, rest more and actually take the time to have a look around.

How steep was the face?

It maxed at 50° which is fairly mellow but the conditions made it absolutely engaging. 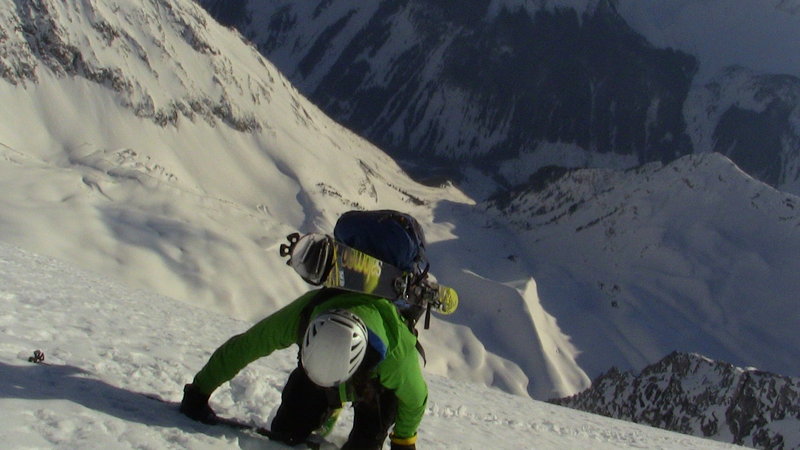 How high is Sir Sandford?

How big was the face in meters? 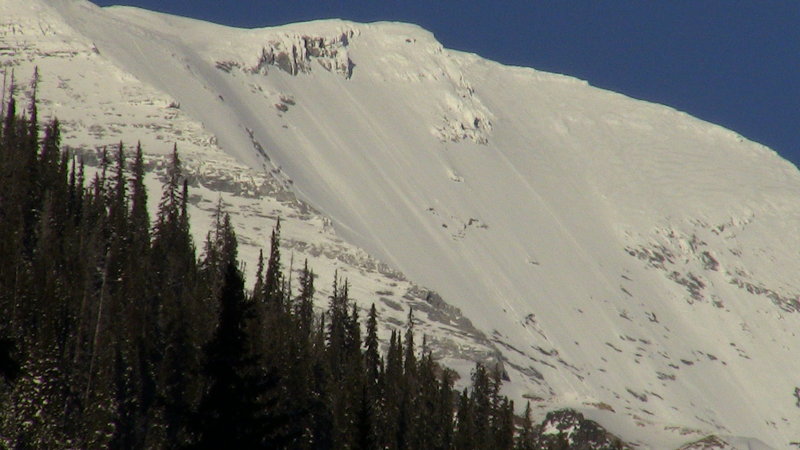 That’s a tough question and of course I can only speak for myself here; no I was not scared, I was engaged. I am a bit abbey-normal in that department and it would take volumes to properly address my standing on having come to peace with my mortality. All I can say is that I felt totally at peace on that day. It felt good to be there and so many variables came together, so many doors were open that it was like we were supposed to be there.

We wouldn’t have pulled it off if we were scared. Just approaching that face is enough to scare the hell out of ya’ or being on the face climbing next to three-metre avalanche crowns, climbing on the biggest rock slab around, sometimes we were punching through 10 centimetres of ‘affected’ snow and facets to the rock slab. It was amazing to be in that position with those conditions. We simply wanted the experience.

The descent was especially engaging. While we were climbing the face it had just enough sun on it to soften the surface but as soon as the sun went away it turned bullet-proof and I mean bullet-proof! It was one of the gnarliest descents any of us had ever done even though it was only 50°, the exposure and thin snowpack was alarming.

Even when it mellowed out to 45°, the snow was so hard it made it really difficult to bite an edge. One slip and that would have been it. So engaging, so exposed, it was awesome to have been that focused. We left the summit at 4:20 pm and it took so long to get off the upper face that the sun was gone but the face being slightly southeast facing, the moonlight quickly took the place of the daylight illuminating the rest of the descent. 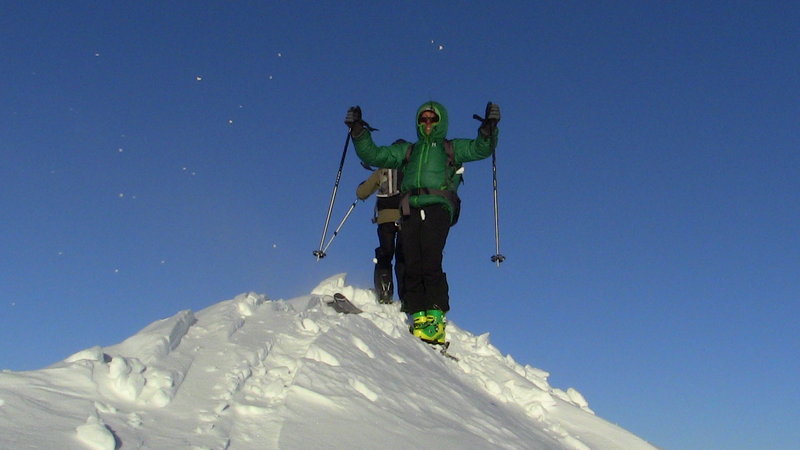 Rob had gone first and Troy and I were taking a break under a small rock outcropping but as soon as the air changed with the sun setting, fierce down-flow winds had begun rushing down the face and reminding us that it was time to get the rest of it done. I had brought the big headlamp so we were dealing with the darkness pretty good, although I spaced my crampons and helmet, I felt super lucky to have gotten away with that one. The south face of Sir Sandy sans helmet and crampons; lucky son-of-a…Troy thought he saw Mark Twight out there on the face.