On February 14, 2016 Dan Michalchuck and his brother Stephen were involved in an avalanche incident on Avalanche Crest in Rogers Pass. The 2.5 sized slide was triggered by another group above the two brothers and even though neither brother were fully buried, Dan was carried through many trees and suffered life threatening injuries:  5 broken ribs, a punctured lung, a lacerated liver, a grade 5 kidney injury, hypothermia and a heart attack. Dan was stabilized on-slope and moved into a snowcave, where he and Stephen had to endure the night (16 hrs on slope). Another group who came to help thought Dan might die. Eventually, Dan was airlifted out the next morning. 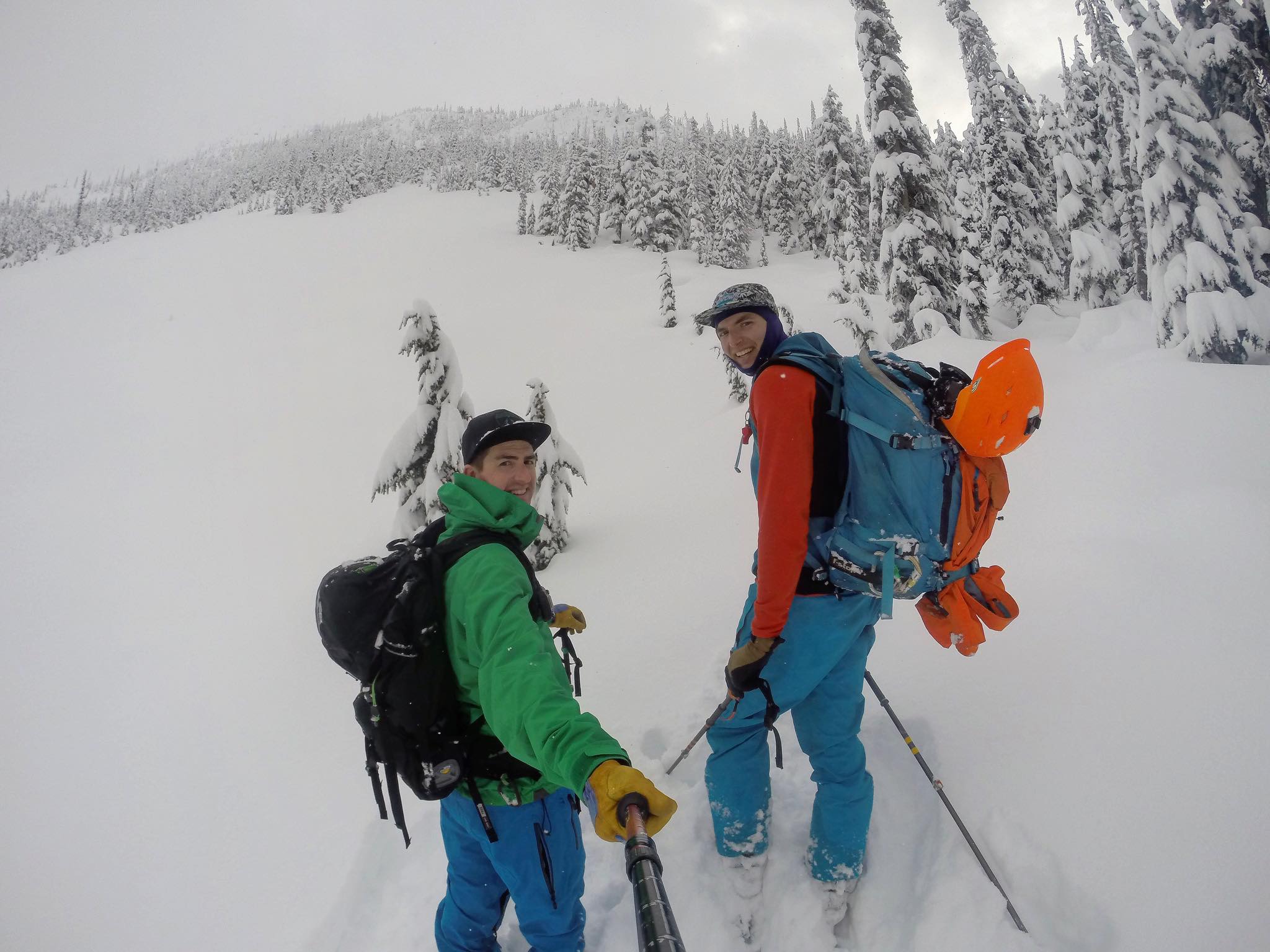 Dan and Stephen on their way up at beginning of the day.

Dan, has a desire to share his experience with the snowriding community with the hopes that others may learn from the experience. Below is a short interview I had with him on Facebook about the incident.

TG: Tell me about that day. Did you know the other group that set the avi off? Were they in the same run?

DM: The day started off with my brother and I putting in the track up the summer trail of Avalanche Crest after 8″ of snow had fallen overnight. We started the day early and had the track and first ascent into the alpine all to ourselves. Our objective for the day was to get a quickie on the slope lookers right (north/west) when you first enter the alpine and then head over to Avalanche crest proper. That short little 300m mini golf zone was nothing short of epic. We did observe some sluffing as we plowed thru the short trees but everything was quite minor as it was contained. This short shot ate up about an hour of our day and by this time a bunch of other groups had now entered the alpine and were now sharing the skin track. We headed over to Avalanche crest and were with 3 Norwegians, 2 other Canadians, 2 Bulgarians and 3 Swiss. The first 2 groups stayed lower in the crest and dropped in. We went to the end of the summer trail just a couple of 100m further and decided it was the furthest we could go due to visibility. At this time we were sharing a gully drop-in with the 3 Swiss and the 2 Bulgarians that were just along for the ride as they really had no clue what they were doing. My brother and I dropped in first and before my brother could reach me, the group above us decided to drop in and triggered a size 2.5-3 avalanche. 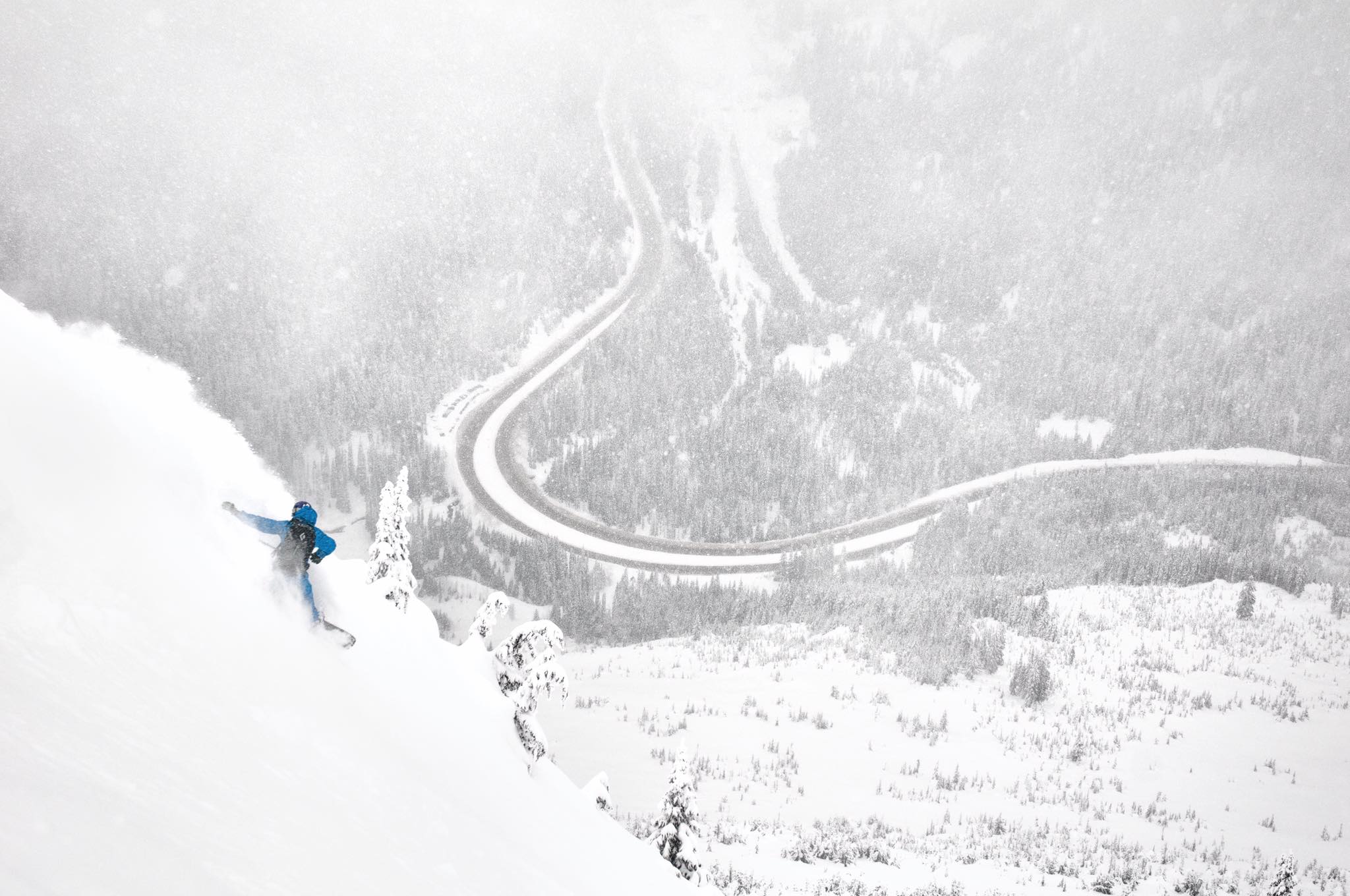 Dan on the run right before the avalanche occurred. Photo: Stephen Mickalchuk

TG: Tell me about after the event occurred. The video ends with your bro shouting your name. Is that you we can see in the shot? Did he race to you and find you really beat up?

DM: The 3 Swiss came to us to check on us. I was unable to move so we hunkered down in a snow cave dug out by the group. We called for heli assistance right away when it was apparent I wouldn’t be moving, when they came tho, they couldn’t get us due to visibility. I went into shock as I sat and rested. Fully conscious the whole time. Heart attack I’m told happened during the avalanche itself from the impact of the tree.

DM: I never thought of death, I just hung onto the last tree I hit until the snow passed. It was the doctors later who told me I should have died. Shock for me was complete blindness. In the morning, I literally couldn’t see. I stayed relatively cool tho as I was cracking jokes. We stayed in the cave until he morning, 16 hours or so until the heli slung me out. The rest of the group had thoughts I was going to die.

TG: Looking back. What could you have done differently?

DM: Looking back I wish we would have told that other group to have dropped into the same gully and not creep over to skiers right which triggered a convex roll that propagated above my bro and I. I felt I chose the lesser of a few evils by going hard right because I knew people were above us to the left.

We dug an extensive snow pit the day before and we’re happy with the risks. The new snow overnight was the snow that that came down on us. It didn’t set down to any other layers.

Also to note, Parks Canada’s [edited to say Parks, was originally stated to be Avalanche] bulletin for the day hadn’t taken notice to the change of conditions overnight. Caught everyone by surprise and then the next day the entire highway corridor was closed. Another reason why not to read into the bulletin and trust it. Only there for info.

TG: One piece of gear you wished you had in your pack that you didn’t have that day?

DM: I would have loved to have had another jacket. Otherwise we had full phone service, garmin inreach if necessary, water, food, etc.

TG: Are you fully recovered or still have lingering health issues?

DM: I’m fully recovered, no lingering health issues what so ever.

ThIs past week has been something else! With the @dirtdudette (?) and the @powphotog by my side, I am now making steps on flat ground once again. I am not at all thinking about the negativity that surrounds the avalanche triggered above my bro and I last Sunday, just the next steps to getting back to what makes me, Me! Thanks to all who have known about my situation and have sent kind messages and to those concerned of me getting back to ? #senditsaturday #splitboarding #snowboarding #makegoodchoices #avalanchesurvivor #twofeetandaheartbeat @avalanchecanada #vancouvergeneralhospital #explorecanadianhospitals ?

Dan has since gotten back on the horse and pumped out this sweet edit for fall 2016.