This post is a world exclusive, detailed reveal of the Dynatift Hoji Pro boot. Read on and watch the videos to see behind the scenes development processes and thoughts from the Eric Hjorliefson himself.

In 2011 Dynafit took on Eric Hjorleifson as a boot consultant. This arrangement became a long-term affair in 2012. It started when Hoji met Dynafit boot designers at the Escape Route in Whistler. At that time Escape Route had become a Dynafit Competence Center which basically meant that the staff had a lot of technical knowledge and expertise about the product line. Hoji then first met with Dynafit staff who were there to talk to Escape Route and a bunch of Whistler locals who were long time users of the products. Dynafit saw Hoji’s modified Titan and saw footage of what he had skied at Golden Alpine Holidays on these modified boots.

Hoji has always been a serial modifier of gear and the boots were by no means an exception. Dynafit mods followed for the Dynafit TLT5 Performance. Ideas really came together as Hoji and the Dynafit boot design team married the technology and features from the DNA/TLT5 line into something that also had good downhill performance yet could also be light while wanting to keep that fantastic walk mode. This culminated in Dynafit’s line of Vulcan/Mercury/One Free Touring boots. 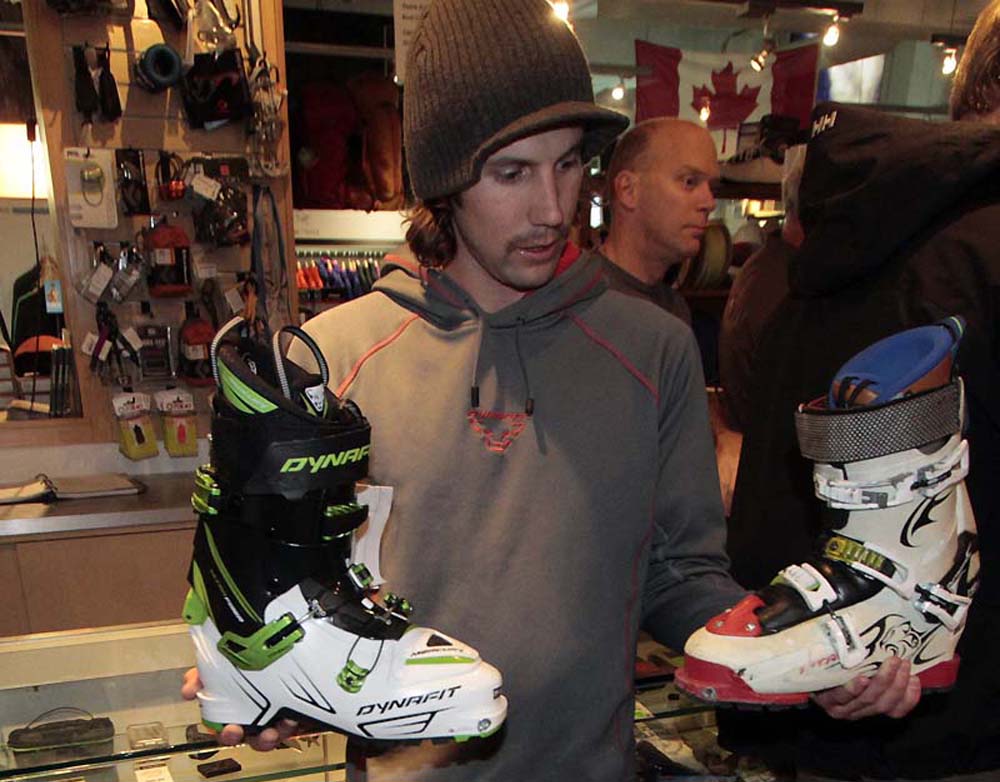 From 2011 – Eric with the production Dynafit Mercury and his modded Dynafit Titan. 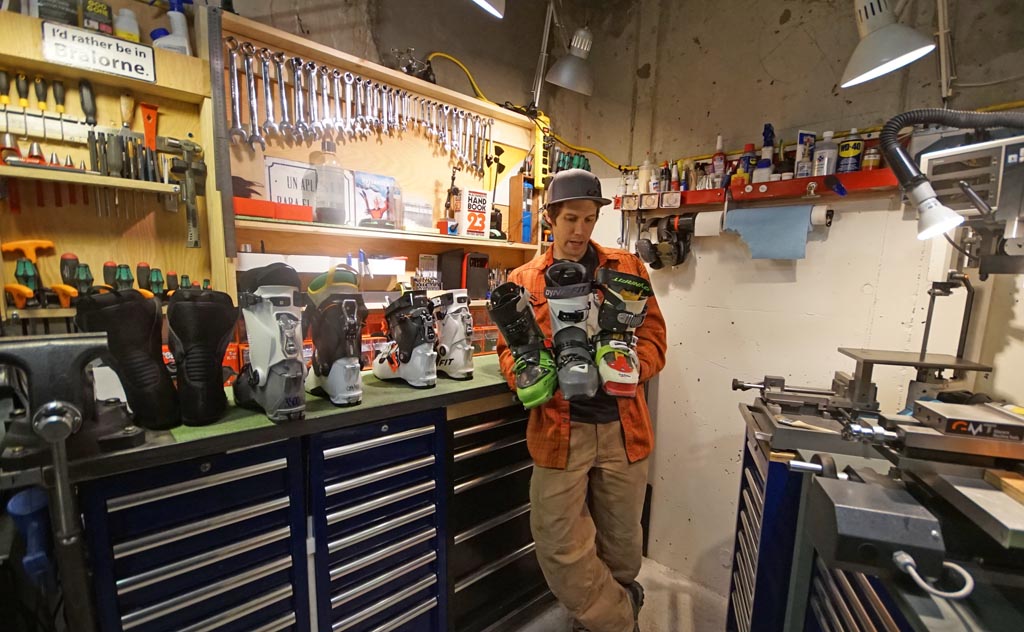 The Dynafit Hoji Pro Tour boot aka the Hoji Unicorn

Fast forward a few years and Hoji still skis professionally and is still associated with Dynafit; generating ideas for their product line. His gear-tinkering habit has expanded as he partnered with ski industry luminary Fritz Barthel (the genius behind the tech binding system) who became Hoji’s mentor. Since then Hoji has spent lots of time in Europe learning with and from Fritz, building out his own prototyping R & D workshop in Whistler, learning CAD/CAM and professionalizing his modification instincts.

Hoji needed machine-functional prototypes for boot-binding interface, something which Dynafit supported. After some four years of prototyping, design and refinement the Hoji Pro Tour boot was born; according to Hoji “the first time in history that a new design has been tested on snow at a high level over this length of time” (All his Matchstick segments were filmed on the proto boots). 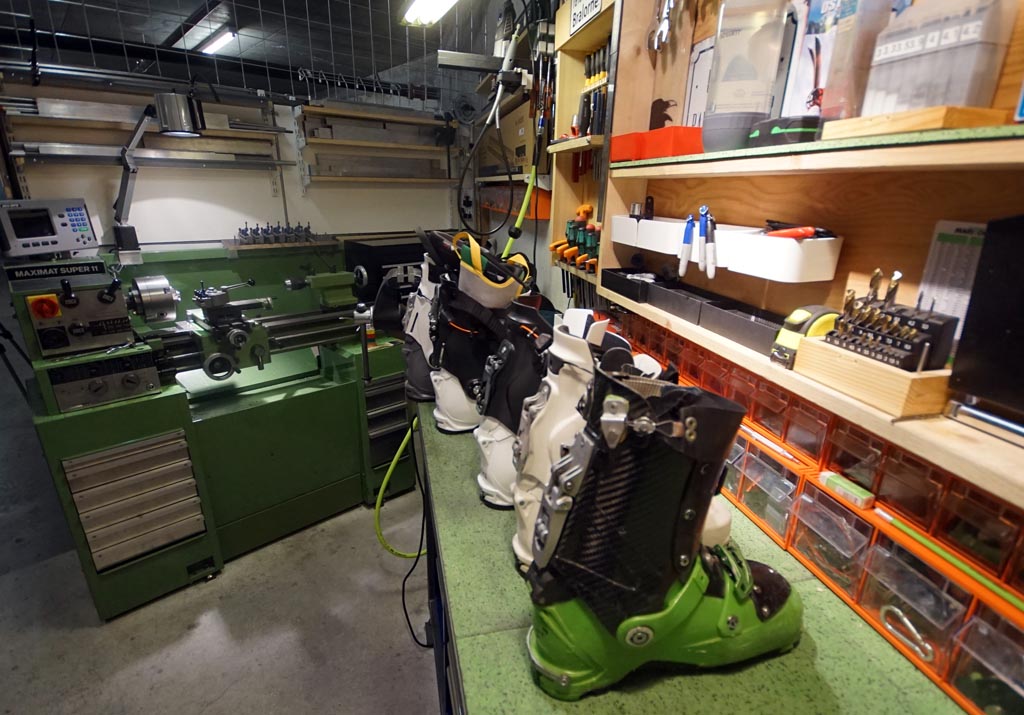 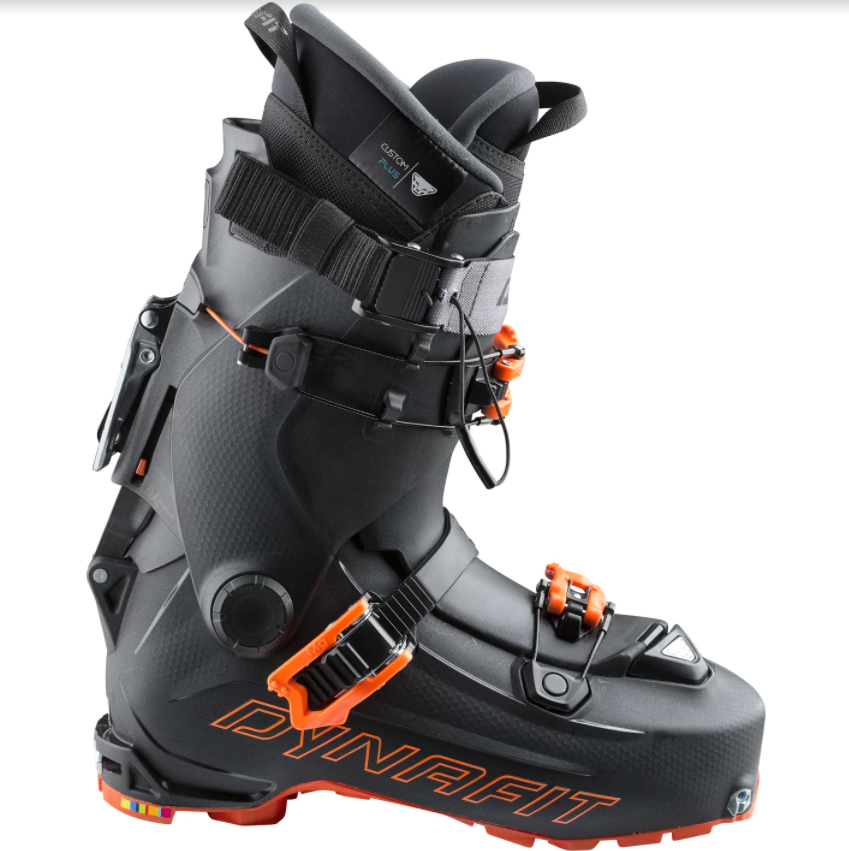 The Hoji Pro Tour is envisioned as an all-around ski touring boot. It is not meant to be an ultra-stiff freeride boot. It’s designed to be easy to use, have really good range of motion, with really good skiing performance in one transition action.

Although all touring boots are about compromises, the Hoji boot attempts to minimize compromises while emphasizing minimalist design and speed of transitions. The key is an internal plastic spine that both supports a walk mode skeleton while perching on the lower shell to allow the boot flex pattern to evenly distribute force and flex from upper to lower shell. For the uphill, the walk mech was designed to separate a free floating upper from lower cuff using a linear cable clamping mechanism so that throwing the walk mode lever gives the user freedom of movement without necessity of fuddling around with buckles (see video below re Transitions).

For the downhill, that same walk mode when actuated into ski mode (combined with shell construction and materials used in a stiff plastic) wedges the boot together to take out play resulting in a stiff chassis with progressive control of the boot derived from tuned flex via design and materials.

There will be articles which will give more objective colour on the Hoji Pro Tour; it’s weight, boot sole length, forward lean and other specifications. What’s seen here is a pre-production sample which will be close to (but not guaranteed to be identical) to what’s released publicly. The purpose of this article is to canvass Hoji (and his mentor Fritz Barthel’s) boot design philosophy and how it culminated in this boot. Pictures and video tell the rest of the story. 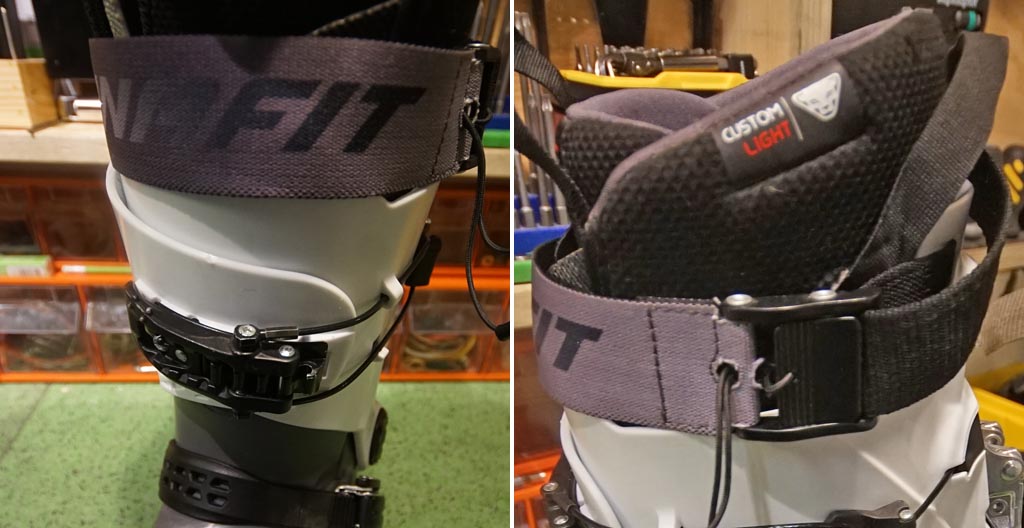 Beefy power strap held with a cammed closure that you can cinch tight then leave tight without impeding walk mode. Top buckle has nice leverage and doesn’t slip when you tighten it (unlike the Vulcan/Mercury buckle). When open that top buckle doesn’t flop around so it can get destroyed when getting into lifts or in mechanized situations. However, by design, you shouldn’t have to open that top buckle for ski to walk mode – see video below 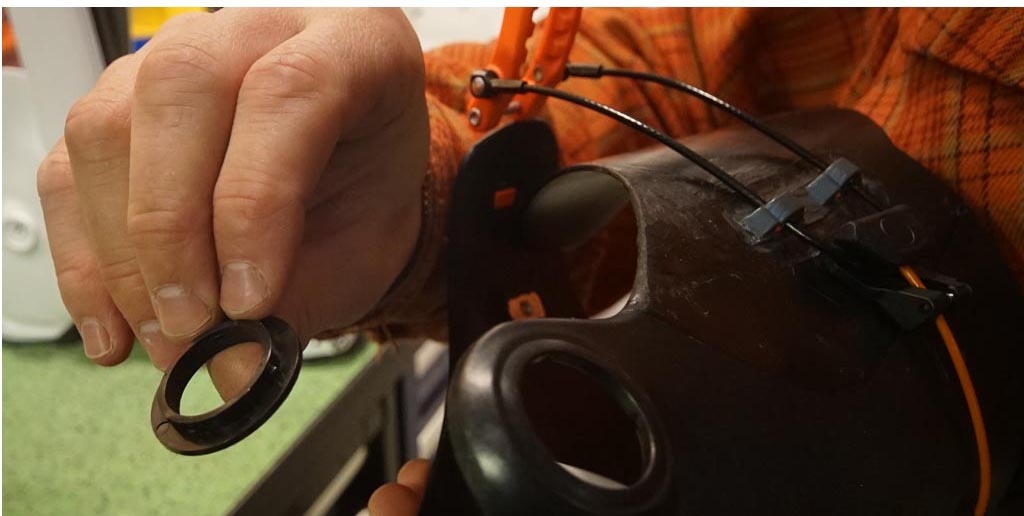 Upper and lower shell cuff pivots use delrin bushings and not bearings; interesting material choice. Some effort was created into putting a large rotating surface. In production the bushings are keyed into the plastic fiber material so they don’t rotate on the cuff material and get abraded. You then get high-density plastic on plastic that’s quite axially aligned so that friction is minimized. 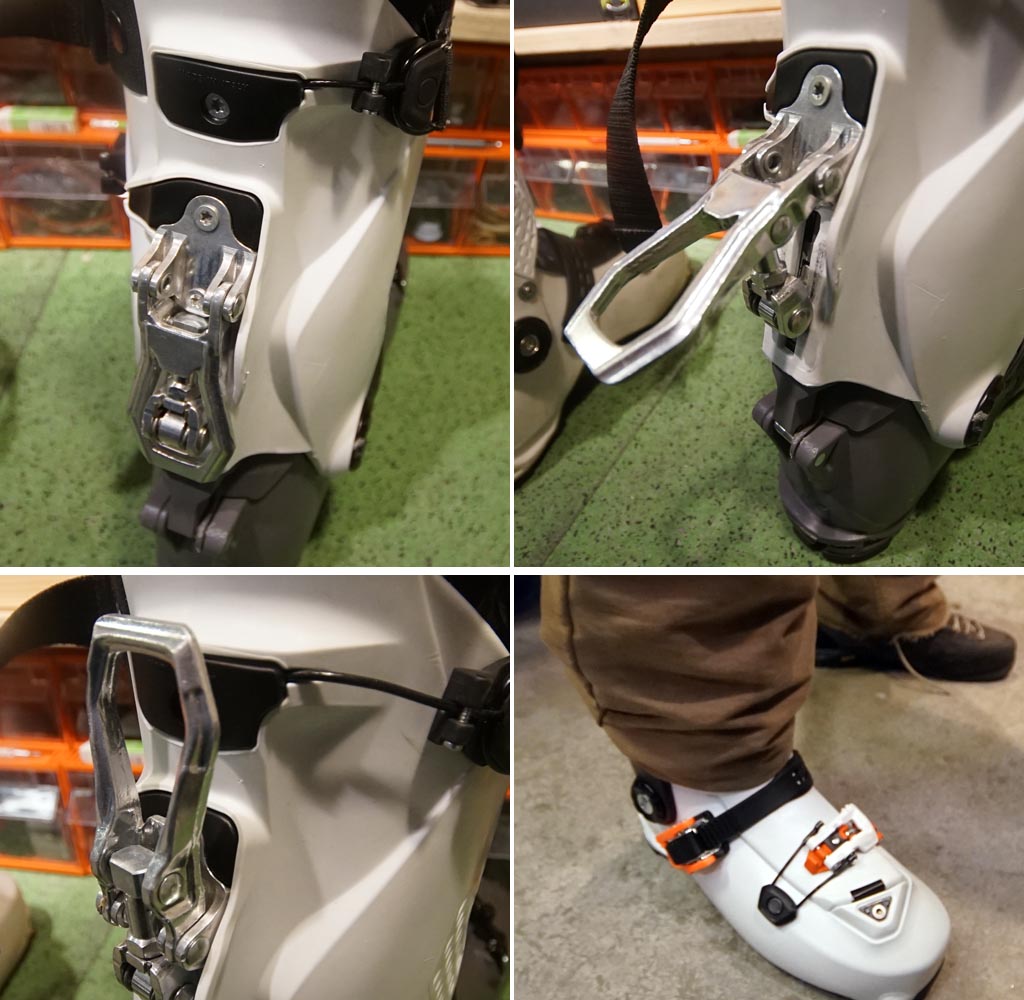 A nice big walk mode is easily used with gloves actuating a plastic protrusion from a molded skeleton (see below) that drops onto the walk mode bar. There’s very little room for play there making for a solid, strong interface. Everything is pulled together by the cable and wedges into a stiff platform via the walk to ski mode engagement (upper to lower cuff to skeleton). The cables have been designed to be be user-serviceable and have held up in the field (see video below)

When all is done up the boot is clean and tidy

The cuffs are riveted so you’ll have to bang those rivets out if you need to disassemble. However, unlike with Vulcan/Mercury the plastic skeleton takes the impact and directs/transmits it from skier to upper cuff and lower cuff so in theory you shouldn’t get that infamous Vulcan pivot cuff slop from uppers and lowers banging along 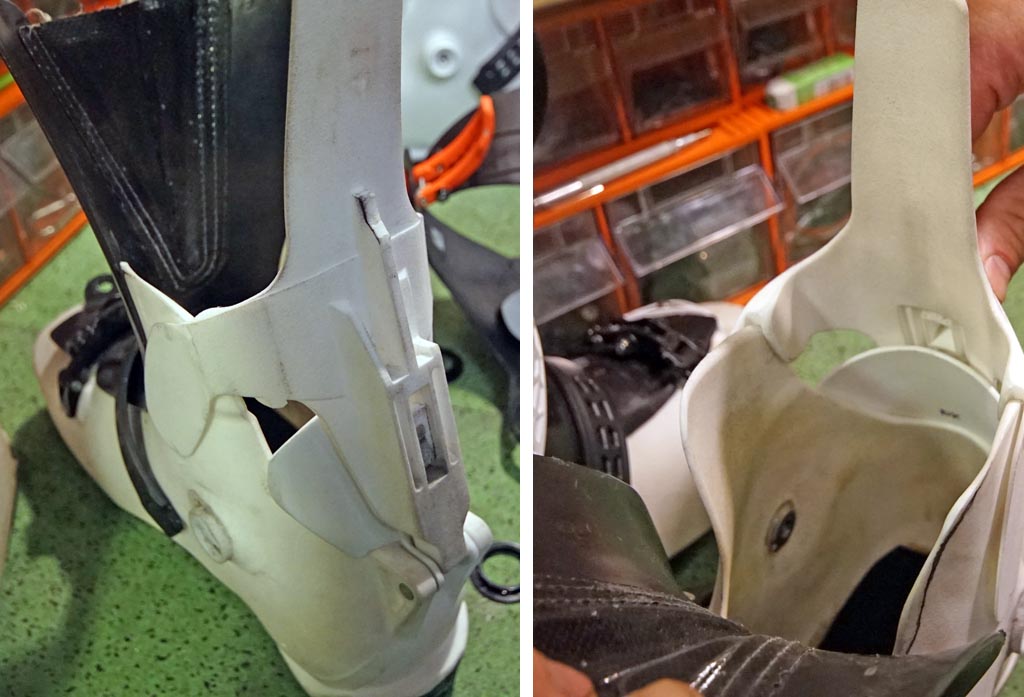 More pictures of the skeleton which even gets nifty drawings in the patent abstract, description and a mention in the claims (see below). The skeleton perches on the walk mode bar while its wings interface with the upper cuff. Theoretically this would allow the upper cuff to flex smoothly as opposed to the Vulcan/Mercury upper/lower cuff interface where flex was controlled via the entire upper and lower cuff deforming before hitting limit stops and stiffness being added by the tongue. Interestingly the tongue in the Hoji Pro Model isn’t stiff (stiffness is designed to come from upper/lower cuff and skeleton.

Bear in mind the context that I am a Dynafit fanboy and still remain one. I have Dynafit Beasts, Verticals and Comforts. My boots are Dynafit Mercurys and two pairs of Dynafit Vulcans (picking one up when the rumours that Dynafit was going to orphan the Vulcan and abandon it for the lamentable Khion were spreading like wildfire). We fanboys badly want Dynafit to succeed but I am unshy of my opinion that Dynafit’s product rollouts in the past few years can best be characterized by snatching defeat from the jaws of victory.

Dynafit had winners in the Vulcan and Mercury and One; then inexplicably killed the Mercury and One thus abandoning reasonably priced boots to other companies and keeping the Vulcan’s prices high while serving customers with a liner that was usually trash-canned immediately from the shop. Let’s not even go near the confused marketing of bindings (Beast at premium prices for a binding that was unfinished); regression in boots (Khion walkmode harkening back to 2008 – Titan days); or consistently poor liners (the TLT5 wet sock, the first-gen Vulcan/Mercury squishy foam liners, the Khion Boa self-destructors).

So, can Dynafit recover lost reputation among the aggressive skiing crowd with the Hoji Pro Tour? This is a rhetorical question of course. To Dynafit; you hired Hoji who has insane amounts of street-cred. It”s up to you if you want to listen to him. Clearly the boot design thinking and fundamentals are sound; but what will you do with this line of boots? Compromise and further missteps are no longer an option in my opinion as you (Dynafit) haven’t left yourself much runway. Production use by backcountry skiers will tell that tale.

Now that is off the chest; here are some observations. I had the opportunity to put my foot in the boot being a nice generic 27.5 sized shell – the same size as co-tester Matty Richard, Hoji’s long-time ski partner and fellow gear-nerd. Observations are limited to carpet-testing as I haven’t skied on them. It’s impossible to have a meaningful opinion about these boots without actually using them on snow. They do flex more like Mercurys in terms of stiffness (this is not a bad thing; the Mercury was more then enough boot for most people for ski-touring). Hitting that walk mode buckle made a lot of difference and I can foresee this being a two buckle transition boot (hit that upper and possibly middle buckle; leave the power strap and forefoot buckle alone).

Further stream of consciousness comments as follow. If you have questions, sing them out in the comments. I’ll put my questions and yours to Dynafit. I’ll update if I hear back: