The New Marker Kingpin… Worth the weight?

When the Marker Kingpin first hit the Intertubes last fall, it created quite a buzz. Backcountry gear nerds everywhere salivated. With an alpine-style, step-in heel piece and beefed up tech toe it looks like no other touring binding on the market. If you are one of those torn souls trying to decide if the Kingpin is worth the price or weight, here’s what I can tell you… 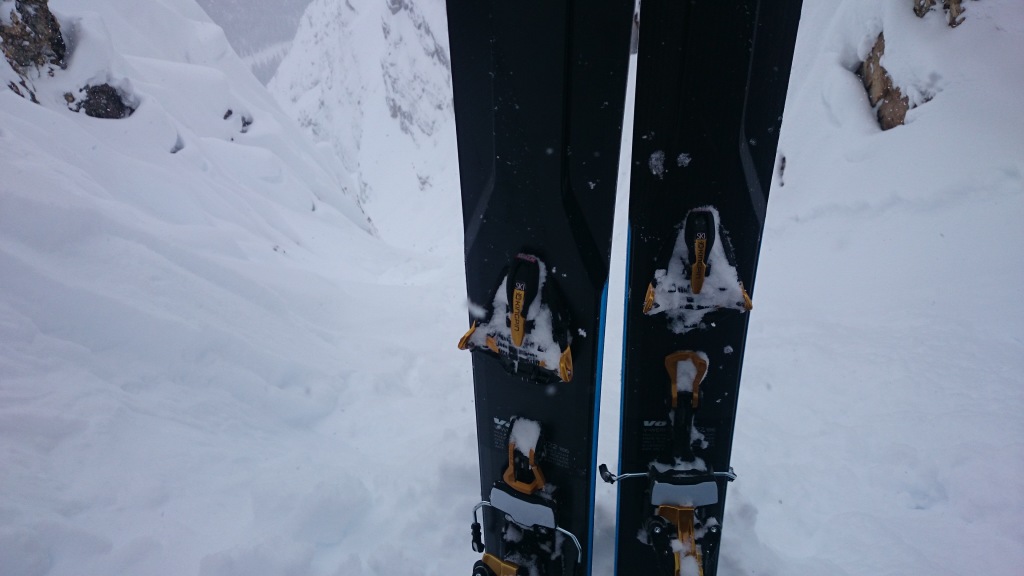 I’ve had 12 days on them including an in-bounds resort day with groomers and bumps, backcountry chutes, powder tree laps and alpine bowls. Pretty much any condition I want to ski and a few I don’t really want to. For me the key to the Kingpin from the start was if it would release reliably like an alpine, DIN rated binding. Yes, the Kingpin and some other tech bindings are DIN certified but it’s a different DIN standard than alpine bindings and up until now I’ve always locked out my Dynafit toes if I’m skiing anything interesting. So do most of the people I ski with. With multiple knee surgeries behind me, I thought it’d be nice to have reliable releasability, even in the backcountry, and that alone would make it worth the weight penalty (roughly 165g heavier than the Dynafit Radical ST).

The results so far have been very positive. I’ve hit avalanche debris going as fast as I like to go and haven’t ejected. I also watched big dudes (Ian Macintosh and Austin Ross) huck a bit on them including spins and a couple bails. All without locking out the toe piece. They ejected a couple times when you would expect them to and never when you wouldn’t want to. I’ve alsoI watched eight people skied them for a week with no pre-releasing and a couple safety releases when you would expect. In short, I’ve grown to trust them to the point that I don’t even consider locking the toe into walk mode regardless of the terrain I’m skiing. And that’s a huge difference for me after locking Dynafits out on almost ever run for years. 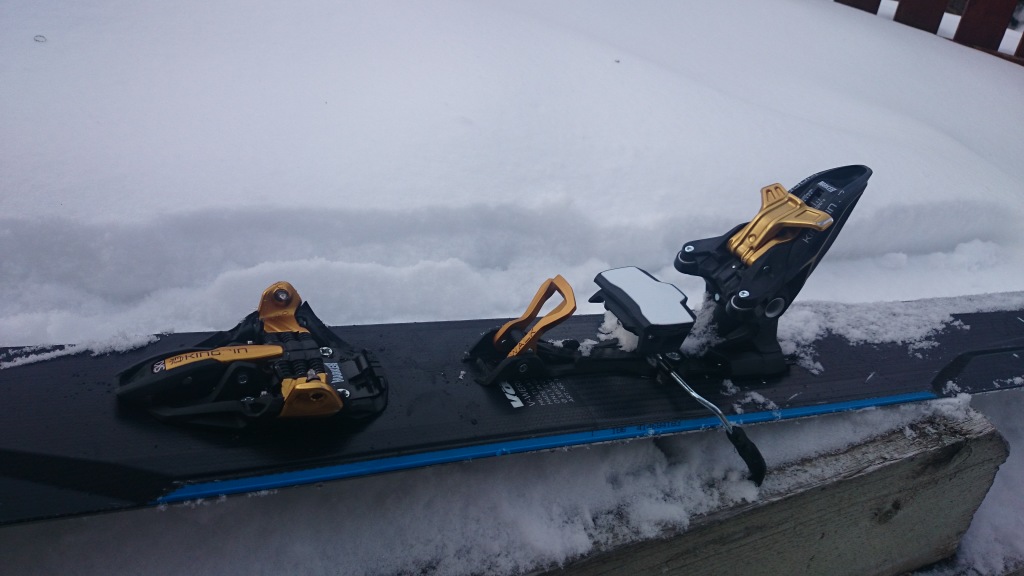 I have the Kingpins mounted on a 122mm waist ski which I imagine transfers a lot of leverage to the wings of the toe piece when you jam on the edges in firm snow. I’ve noticed no wiggle or movement of any kind in the toe. This could be due to the third spring in the toe, but I think the key to this retention and transfer of power to the edge is actually the heel piece. Unlike most pin bindings, the Kingpin’s alpine binding heel piece locks around your boot  and plants it down to the brake/ski. All other pin bindings leave your boot heel floating and all real power transfers through the toe pins. 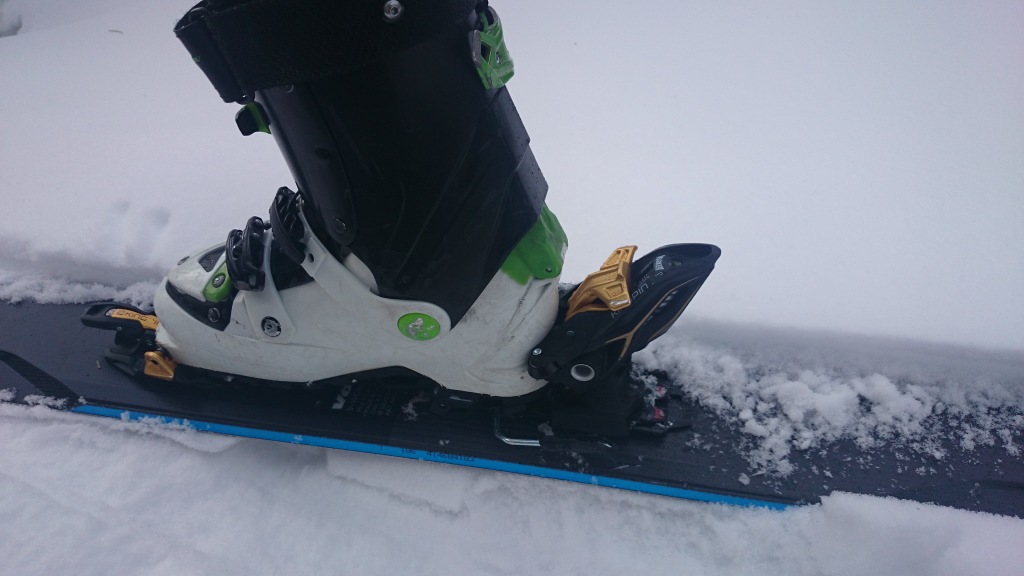 The heel piece in Ski mode. Locked and loaded!

The retention and reliable release are the main advantage to the Kingpin, but the power and feel of them will win some people over as well. Skiers wanting releasability and strong retention for hard skiing will really like this binding. Those wanting lightweight minimalism and quick changeovers will steer clear. Most of the Kingpin’s other features are pretty standard and compare to its competitors in the ever growing tech binding market, but here’s my list  of pros and cons if you’re trying to make a decision…

-“Alpine Binding”-like releasability and retention. I’ve been skiing mine on 9 which is what I ski my alpine bindings at. I release right at what feels like the same point too. It’s the heel that releases though, not the toe so it isn’t quite as great for your MCL as a standard alpine binding I believe.

-Easy entry for a tech binding. I’d say the easiest on the market though G3 Ions are a close second. Also like the Ion, the brake stays deployed when you switch to Walk mode until you step down and retract it. It works great for keeping your ski in place during changeovers and I’ve seen no issues with icing or unwanted deployment so far.

-Alpine binding feel when carving on hardpack. I have to admit it’s subtle and I only mention it because others seem to feel it more than me. The power to your edge is great, but it also has the elasticity of alpine bindings instead of the direct/locked feel of a Dynafit on hard pack. But who wants to ski hard pack anyhow?

-When you click the heel in you just trust them. The feel and look of the binding with the big spring in the back and the third spring in the toe piece gives you confidence.

-Fairly low to the ski for a tech binding which I like and your toes and heel both push down onto the ski instead of floating up above the ski with pins holding them.

-The heel lifts are really easy to deploy and retract with a ski pole. The toe also releases easy with a pole. 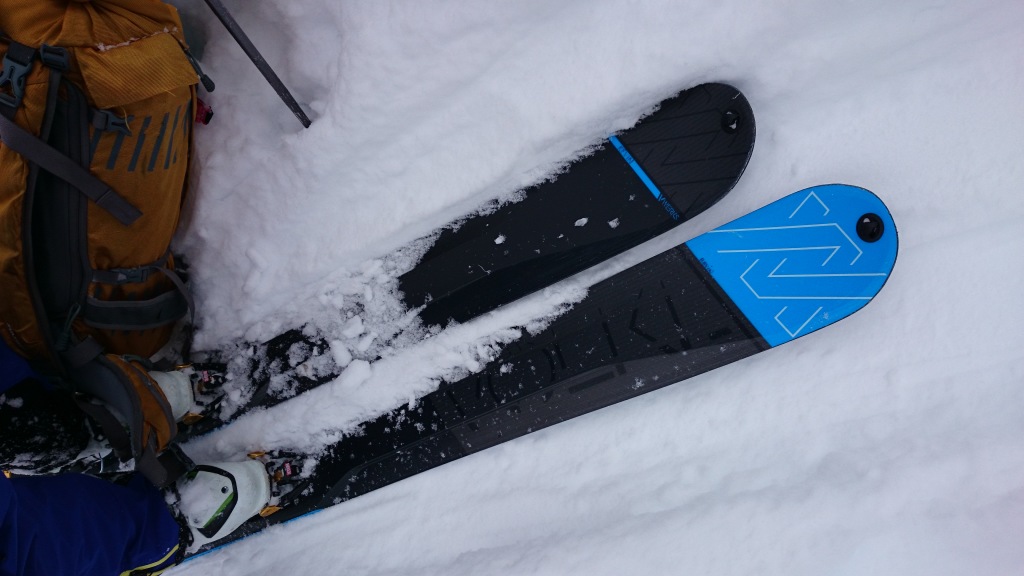 Testing them on 122m waist skis. 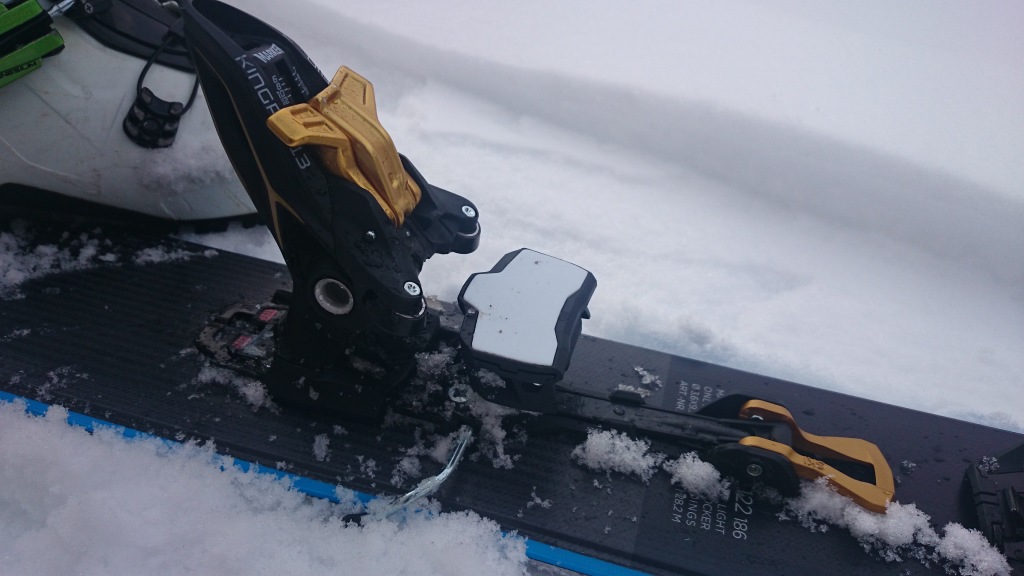 -Weight. The Kingpin weighs in at about 730 grams while the G3 Ion is 623 grams and the Dynafit Radical ST is 566g. So there is a weight penalty. The Dynafit Beast however, is probably a closer match for retention and releasability and weighs in at a heavier 950 grams or so.

-The heel piece is one extra step when switching to ski mode. You have to step on it to open it like an alpine binding as it tours in the closed position. It’s only seconds but I keep forgetting and fumble with it a bit.

-As you probably heard, the first generation had issues with the toe pins coming loose. This problem has been fixed and all indications are that we won’t have to worry about similar issues in the latest version, but it did hurt people’s confidence in the product for good reason. Half of my days were on the first generation pins and they did start working out. They were replaced for me and the new ones have been great.

-The beefier toe piece leaves less clearance for snow and ice to fall out and in some conditions can be more of a pain than other brands. Holding the ski vertically and using a pole grip to hit the toe closed then open a few times takes care of the problem easily. The heel piece seems to have none of the issues with icing that the Ion and certain Dynafits have though. So it’s a bit of a trade off.

-You can not easily go to ski mode from walk mode without taking the ski off (something I like to do 80% of the time on Dynafits). You can use a pole to open the heel piece (it’s pretty stiff though, so don’t use your fancy. light carbon poles) and bend down to flip the walk/ski lever under your foot, but it’s not nearly as easy as the old Dynafit Verticals where you twist the heel with your pole while standing. 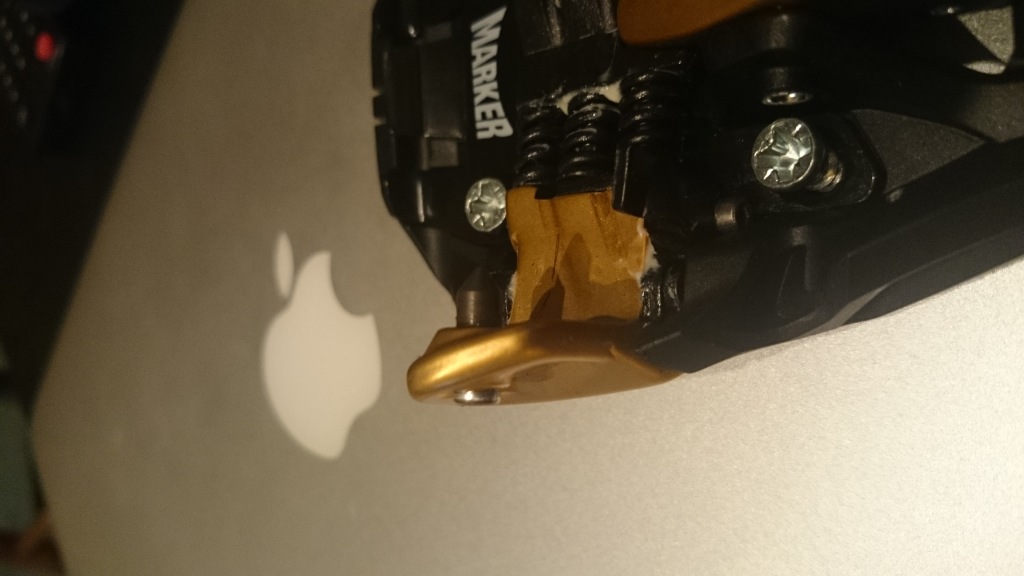 Replacement toes. You can see the outside of the pin sitting nicely outside the wing. 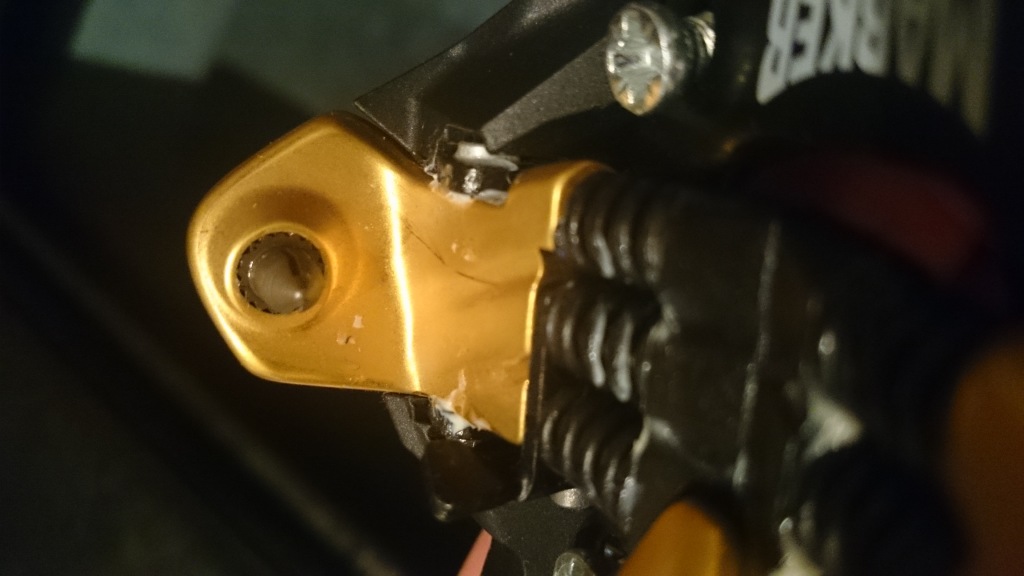 The replacement pins seem to have tiny ridges around the pin inside the wing. 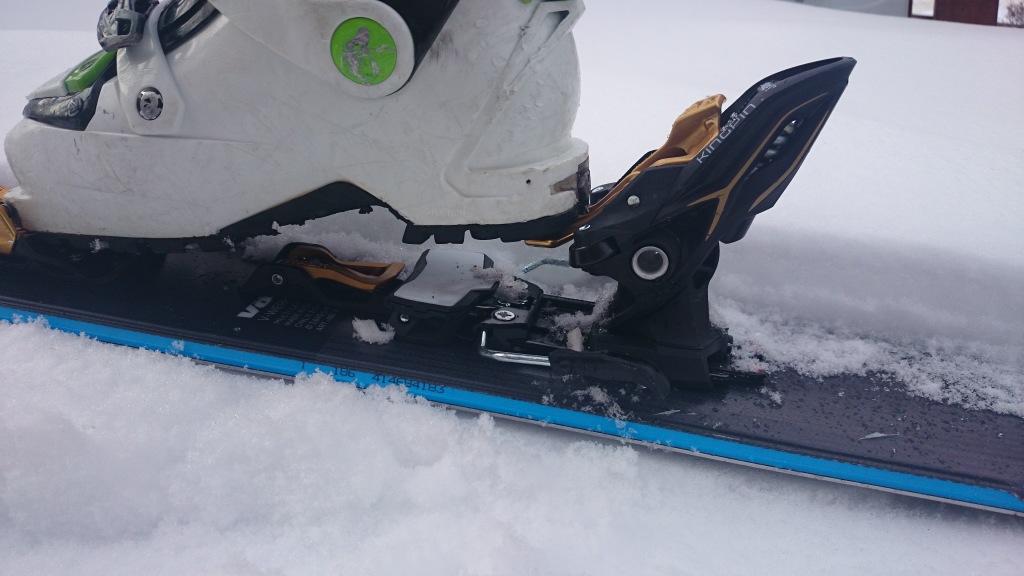 Feel free to leave any questions in the comments below and I’ll do my best to answer them for you.