Prior BC Splitboard 165 – An Honest Review

Nothing in this life is free, not even lunch with your mom. Sure, she may pay for that Beef Dip, but you’ll likely have to explain to her why you’re single and childless at the at the rusty old age of 34.

Anyways, my point is this: I didn’t get this board for free. So this review isn’t just an obligatory hand-job to a company on the hunt for good press. This is a review of a board that I bought from a company that I trust.

My first day out on it really put this board to the test. A friend and I decided to hit the backcountry north of Kicking Horse Mountain Resort, which meant that my first run was on scratchy, inbounds hardpack…A lot of splitboard reviews come from people testing them in 50cms of blower pow, the kind of conditions where even a Black Snow Legend (an edgeless beauty sold at Toys R’ Us in the late 80s) would receive a favourable review.

But if your splittie can handle a chalky chute with a mogully out-run, you know you’ve made a solid decision. The BC Split 165 took some muscle to initiate turns in those conditions, mostly because I haven’t ridden anything longer than a 162 in a season and a half. But I figured that out after my first turn and was impressed by the way she handled such variable snow. 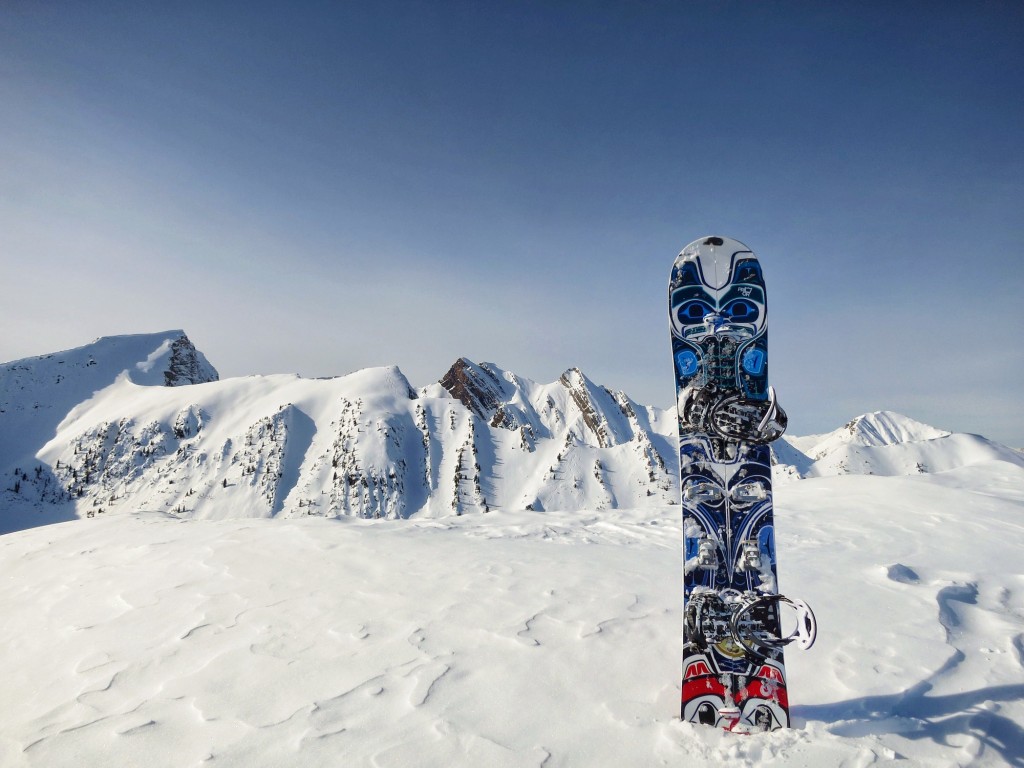 The Prior BC Split 165 looks right at home in the Dogtooth Range. It’s worth noting that I run Spark bindings on it, which make the board perform way better than the traditional Voile plates.

The reality is that, in the pursuit of bigger lines in this seemingly-changing climate of ours, split missions aren’t always rewarded with perfect pow. So I’m stoked that I now have a board that won’t give me pause while dropping into scary snow conditions.

After a quick skin up, it was time for me and my new shredstick to enjoy our first pow line together. I’d spotted a nasty run the day before: a facetted, rocky, narrow-ass motherfucker whose 50 degree pitch forced me to contend with a river of sluff before I exited into the questionable snow conditions on the fan.

This is where I was thankful that I didn’t get anything shorter than a 165. On every turn, both heelside and toeside, it felt like I was standing on a solid platform in the snow, a sturdy shelf from where I could ponder my next move. Of course it’s still a splitboard, which means that it’s a board that’s been cut in half, so it’s never gonna ride like a a traditional snowboard. In spite of that, it still felt really damn good. 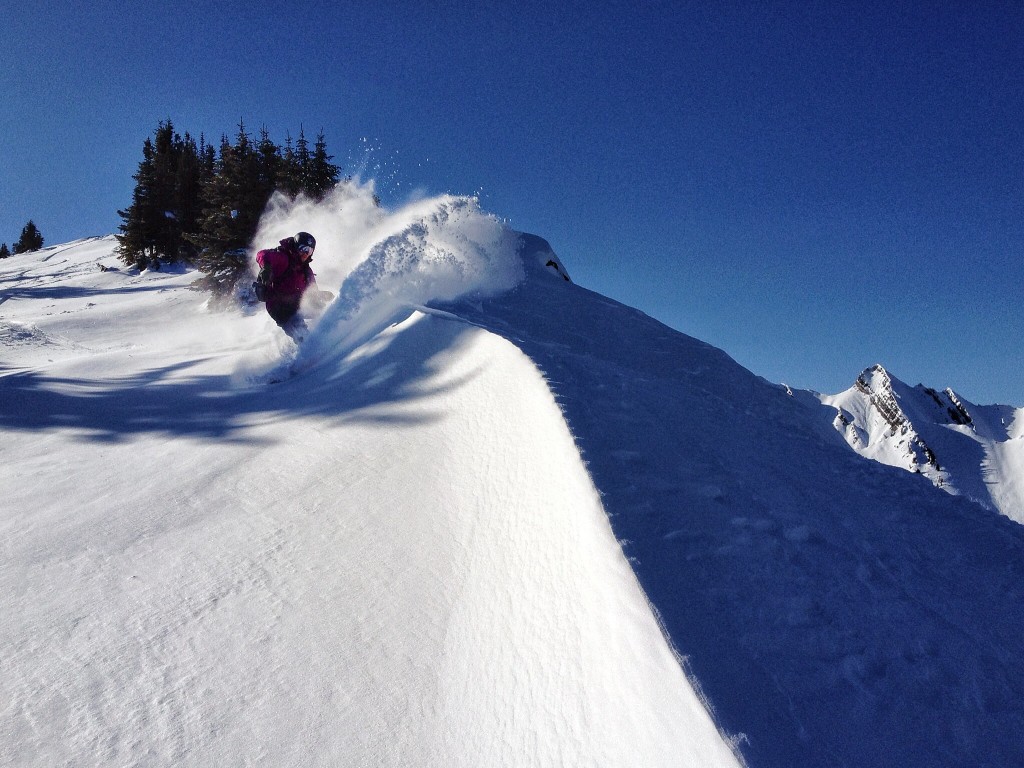 Pow like this is fun on any snowboard, but I was stoked on the BC Split’s surfy feel…Photo: Brian Gibson

The BC Split is slightly tapered as well, which made it easy to get from one edge to the next. And while I’m talking about the tapered shape I’ll address my biggest concern about this board, the one thing I would have done a little differently if I had a hand in the design. The tail’s not as long as I’d like it to be. I counteracted this by setting my stance almost directly in the centre of my board instead of putting it 1.5 inches back like I usually do. Anyways, I wasn’t sure she was gonna hold when I pressed a high speed wheelie coming out the fan at the end of the line, but she did.

I still wasn’t entirely convinced by the tail. But I had a chance to wield this board in some pillows on my second day out with her and, once again, she performed really well. Pillow lines are the kind of feature that will wash out a board with a shitty little tail. But the BC Split really held her own, even though I was a little sloppy, riding with a heavy pack that was stuffed with the essentials for climbing up a big alpine face…(the snow up high sucked so we turned around and rode said pillows instead). The board felt solid the whole time and I was super impressed with her stompability in the soft, if slightly variable, snow conditions. 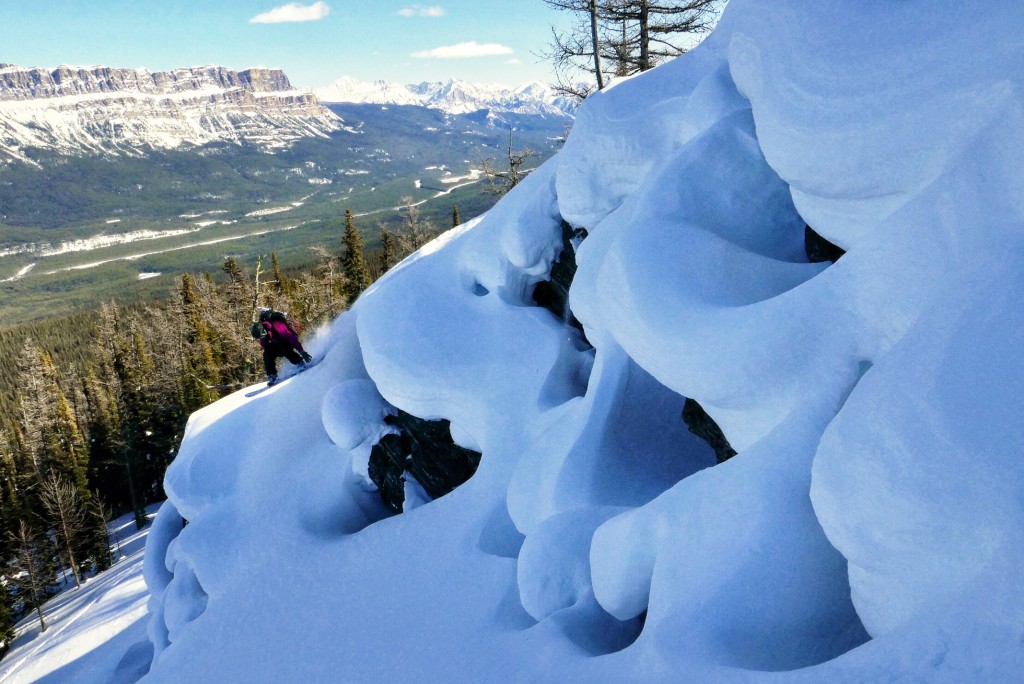 Terrain like this really puts a board to the test, especially when the snow’s not ideal…Photo: Malcolm Sangster

I also really liked the way she felt while skinning up. The BC Split has a hybrid rocker design, with traditional camber underfoot and rocker on the tip and tail. We encountered all sorts of skinning conditions, from icy sidehills to deep facets and breakable crusts, but the camber profile provided a really solid hold throughout. The last board I had was a reverse camber unit and I hated the way if felt on the way up.

It’s also worth mentioning that the last split I had, an Arbor Abacus 160, was way lighter than the BC Split 165. But I always felt like it was more of a girls’ board and have since been trying (unsuccessfully) to unload the thing on any adventurous shred betty over 5’6″. In choosing my split, I actually went for Prior’s uber-durable Quadglass Construction as opposed to the XTC Carbon Construction, which would have been a little lighter. I’ve never been adverse to heavy set-ups, so long as they’re super solid underfoot.

Both days, we ripped back to civilization via iced-over monkey trails, a heelside one on the first day and a toeside one the next. Being able to ride a board switchstance is super important to me, as the difference between toeside and heelside can actually be the difference between life or death in situations that involve exposure. So I was stoked that, in spite of the tapered shape and small tail, the board felt pretty natural to ride switch. This would inevitably be compromised by setting your stance back of centre and, to be fair, I didn’t try riding it switch in the pow. But I’m only two days in with this beaut, so I guess Ill have to save that for next time.

Anyways, overall this board is fucking rad and I’m super happy that I didn’t throw my money at a product that I don’t really like (I do that a lot). It took some sniffing around to find a board with the shape and camber profile that I was looking for but I’m stoked that Prior, a local company who’s been in the splitboard game longer than almost anyone else, had a shape that I was interested in. And given that I actually paid for the thing, I didn’t have to dish out a wristy and/or explain why I don’t have a real job to anyone. 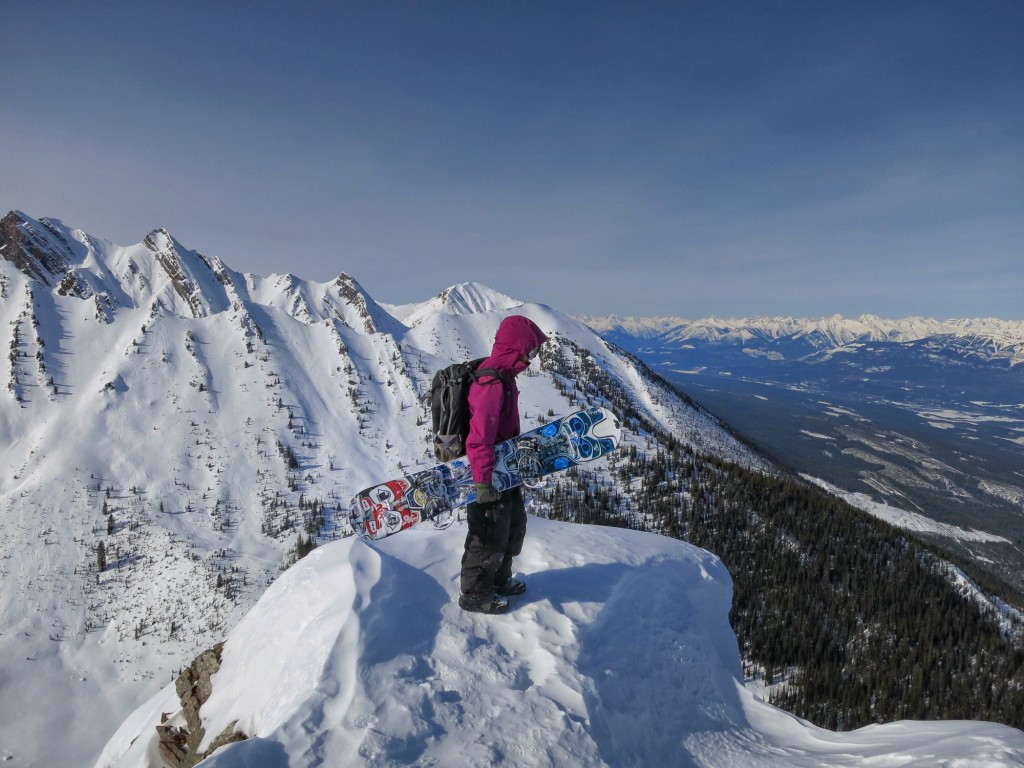 It’s nice to have a board that you can trust in big terrain…Photo: Paul Smith

Check out the specs on the BC Split and the other shapes in the Prior fleet here: http://www.priorsnow.com/gear/splitboards/backcountry-splitboard

And if you’re looking to grab a new splittie, Prior or otherwise, The Splitboard HQ can sort you out as well…