Search
Home
CategoriesBackcountry
Glamping with Chilko Basecamps - Review
Chilko gets you into incredible terrain with zero hassle and a great price.
Guides9
Food9
Terrain9.5
Amenities 8.5
Logistics9
Price9.5
The Good
The not so good
2018-03-15
9.1Give'r

I wasn’t sure what to expect when I signed on to spend a week with Sam McKoy’s Chilko Basecamps for their Pemby Pow trip. I expected swanky camping and good food, but the skiing? I really didn’t have a clue. The Pemberton area gets awesome snow, but do guides let you ski fun stuff or is all super mellow? I really wasn’t sure, I’d never skied with an ‘on duty’ guide before outside of an AST course.

Trading a Lodge for a Tent

“That’s the second burliest line a guide has ever taken me down.” Ryan was looking contemplatively back up at what we’d just skied as he uttered that assessment.

“Oh yea, what was the burliest?” asked Sam, our guide. “I lied so you wouldn’t feel bad. That was definitely the burliest.” 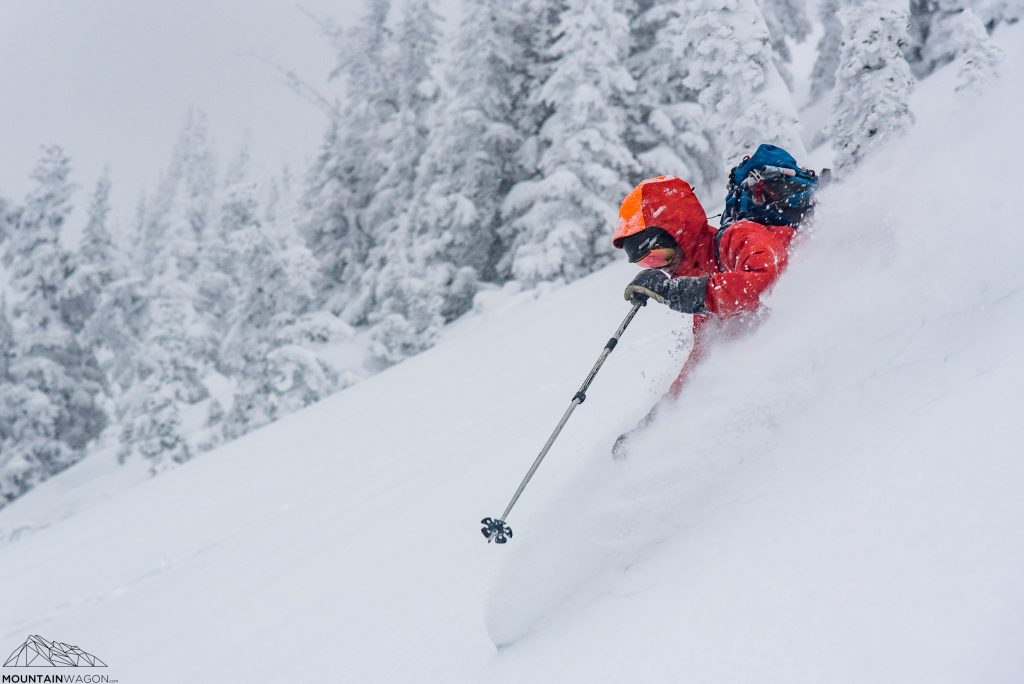 In retrospect, I can say with absolute confidence that digging through a cornice to access a 1000m line definitely wasn’t what I expected to be doing.

The Chilko Basecamps model is simultaneously new and old as the hills. Sam skips the expensive lodges and instead runs a nomadic business that sees him flying gear and guests into remote locations (and Pemberton) where everyone sleeps in tents and skis all day.

People have been huddling in tents for a rough approximation of forever. While practice and experience can make it possible for the whole thing to be more than just an exercise in abject misery, for myself at least it’s generally a means to an end. I sleep in a tent in the middle of winter because that’s what I have to do in order to accomplish an objective, not for fun.

So why the hell was I joining Chilko Basecamps for 5 days in tents?

Well, there’s a couple of things that interested me about the whole model.

The first is that Chilko is less winter camping and more ‘portable hut’. A pair of Hilleberg Atlas domes connected by a tunnel house a full kitchen, complete with chef, and living/dining area. It means that instead of spending evenings huddling in the dark in a blizzard while trying to be social and eat dinner together when all you want to do is retreat to your sleeping bag, we could be comfortably sitting inside the common tent. 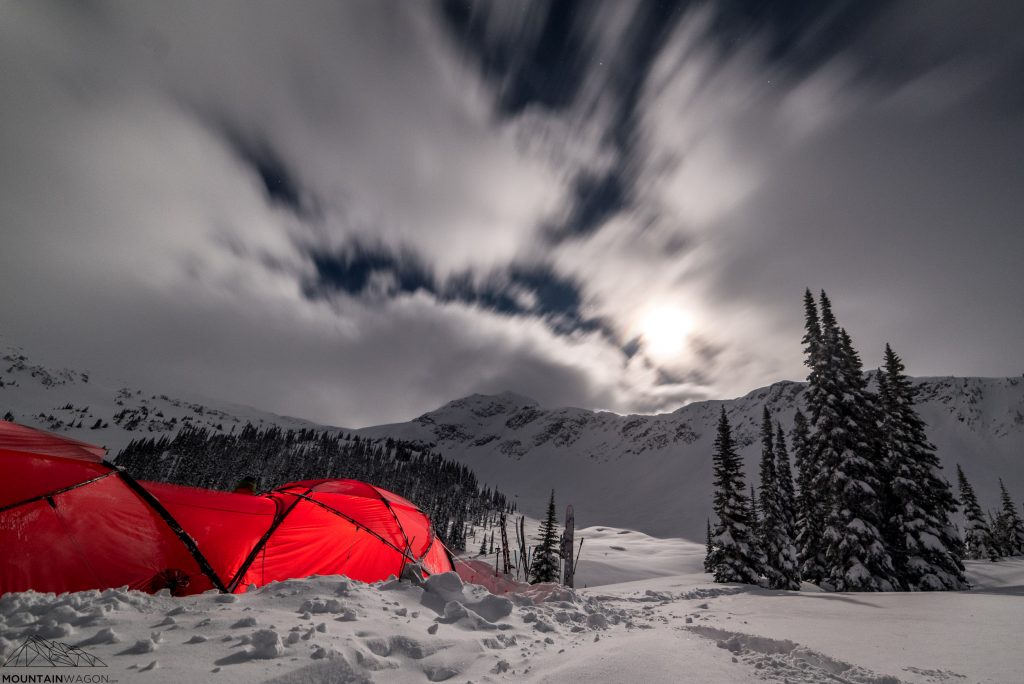 A moment of night time clarity

The second thing I was interested in was the prospect of totally untracked powder.

When you stay at a cabin or lodge, you’re often skiing the same areas that the previous week’s guests were skiing. Chilko’s roaming model means effectively bringing the lodge with you – with nearly unlimited backcountry terrain out there, even the annual Pemby Pow trip I took part in could operate for a few decades before returning to the same location. Every trip gets virgin snow so you aren’t really depending on a fresh dump to fill in other people’s tracks.

Finally there’s the cost aspect. A fully catered and guided week at a lodge costs a fortune. 5 days with Chilko on the Pemby Pow trip costs only $1500. It’s on the lower end of the price range for a Chilko trips, when you consider that you can get a week long trip into the Waddington Range for $2400, the value Chilko offers is pretty fantastic.

So with a little trepidation I found myself at Pemberton’s Blackbird Bakery early on a Saturday morning, drinking coffee with Sam McKoy, David Graham our chef and assistant guide and the other 5 participants on the trip. 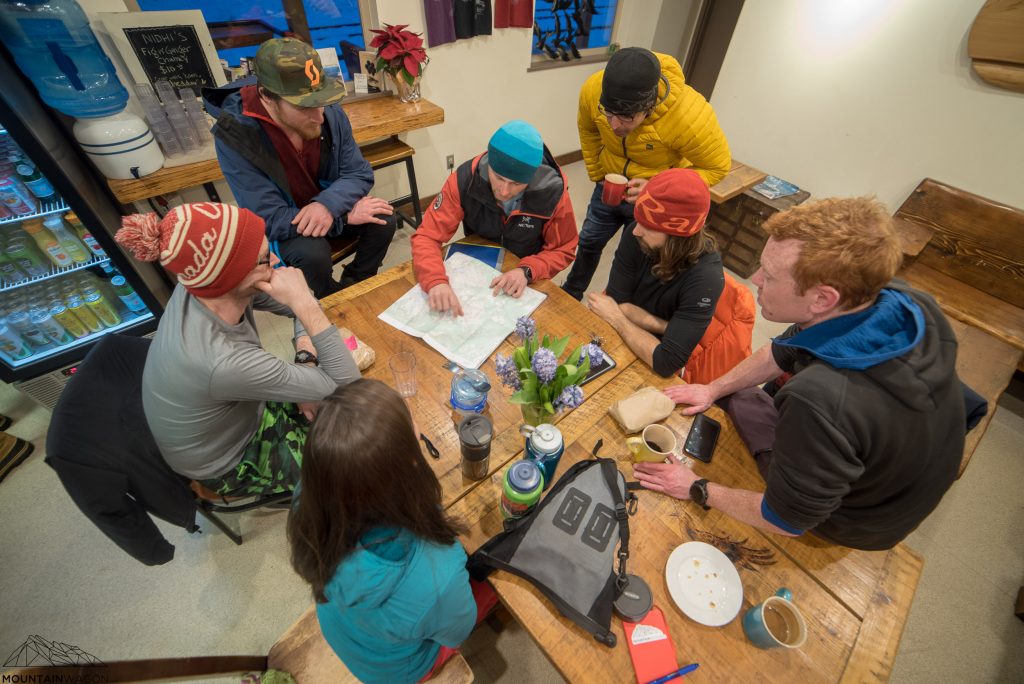 Sam revealing where we’re headed for the next 5 days

Sam busted out a map and showed us our heretofore secret destination – Valentine Lake. We went through the usual introductions, discussed the plan, trip safety and then headed for the Pemberton Airport where Blackcomb Helicopters was going to meet us to fly us into our destination.

Immediately though, we hit a snag. The weather wasn’t cooperating. Puking snow and heavy cloud cover meant we weren’t going anywhere until the weather broke. First, we killed time by doing beacon practice in a nearby park. Then we killed time by practicing shoveling techniques. By around lunchtime, people were napping in the hallways and I was starting to wonder if the weather was actually going to clear long enough for us to sneak a couple of heli loads up to the lake.

Sam though, Sam seemed pretty relaxed. He assured us that our weather window was coming and sure enough, with light failing fast, the clouds suddenly parted and within minutes we went from lounging around, killing time to watching our first, frantically packed heli-load disappear into the mountains. 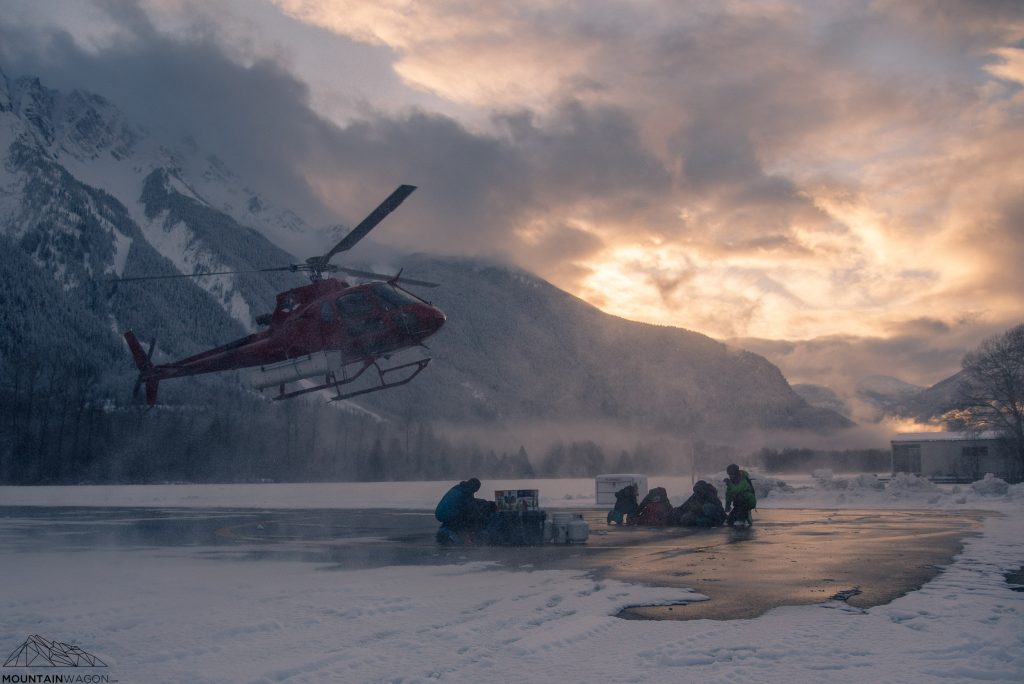 It took every scrap of daylight, but we manage to get the heli off the ground.

David and I were the last two to fly up to the lake and as we circled to land the scene was almost comical. Below us were six people and a veritable mountain of duffel bags. On the ground, we were confronted with the deafening silence that follows watching your heli disappear from sight and the seemingly enormous job of turning that mountain of duffel bags into our home for the coming days.

Sam put us to work either setting up the fleet of two person tents we were sleeping in or helping him and David get the common tents up. As soon as the kitchen tent was up, David got to work on dinner and by the time all of the remaining tents were up, the two common area tents were filled with the smells of food.

When I think of the food I normally eat in a tent, I picture dehydrated meals and bars of chocolate. David though, he comes from a restaurant and catering background and the food showed that culinary background.

That first night, as we frantically set up tents around him, using nothing but three propane burners, David prepared bacon-wrapped fillet steak sandwiches with home fries and cesar salad. Desert was pre-made turtle brownies. That first meal set the tone for a trip filled with the most ridiculous food I’ve ever eaten in the mountains. The next morning, after fresh coffee (or chai lattes for the non coffee drinkers), David had fresh made chorizo breakfast burritos filled with fresh eggs, mango salso and guac. 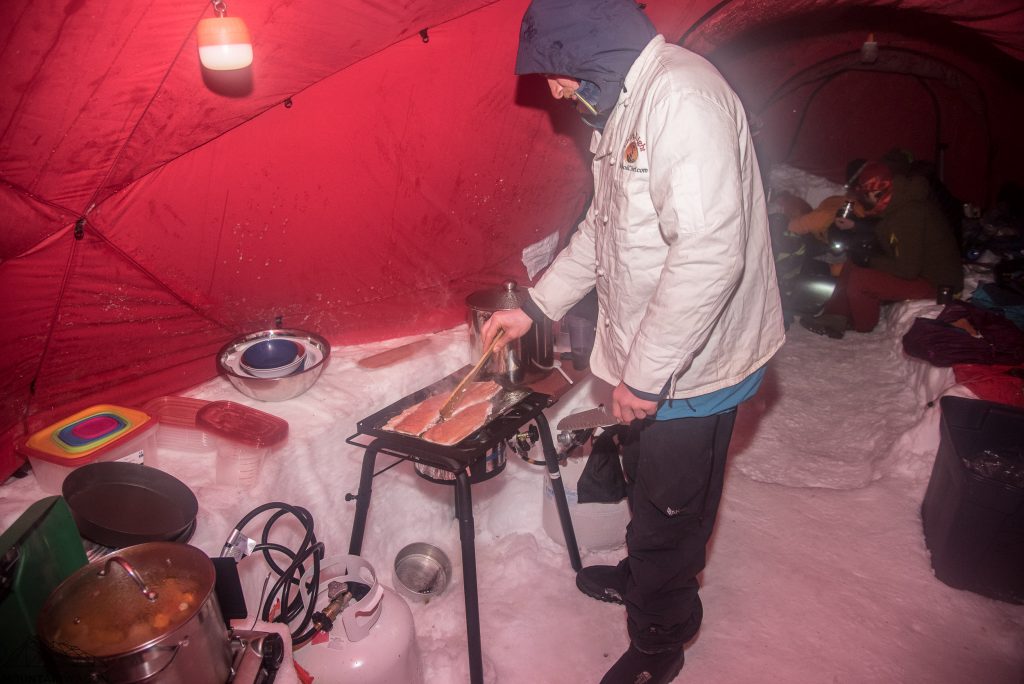 Waking up that first morning was really what showed me that this wasn’t going to be your usual misery laced winter camping. I belligerently woke up and contemplated refusing to leave my sleeping bag before bracing myself to face the blowing wind and snow I could hear from inside my tent. Once outside my mood only darkened. It had dumped overnight. 30cm of snow were weighing down the walls of my tent and post-holing over to the common tents I was gearing up to go into full on un-caffeinated grumpy asshole mode.

And then I walked into the tent where Sam was building a staircase down into the tent that had been on flat ground just the night before and found David, with a giant smile on his face, letting me know fresh coffee was ready to go and those breakfast burritos would be ready shortly. That was the moment I realized this wasn’t winter camping. This was winter glamping. Fresh coffee, good food and shelter to eat it in. 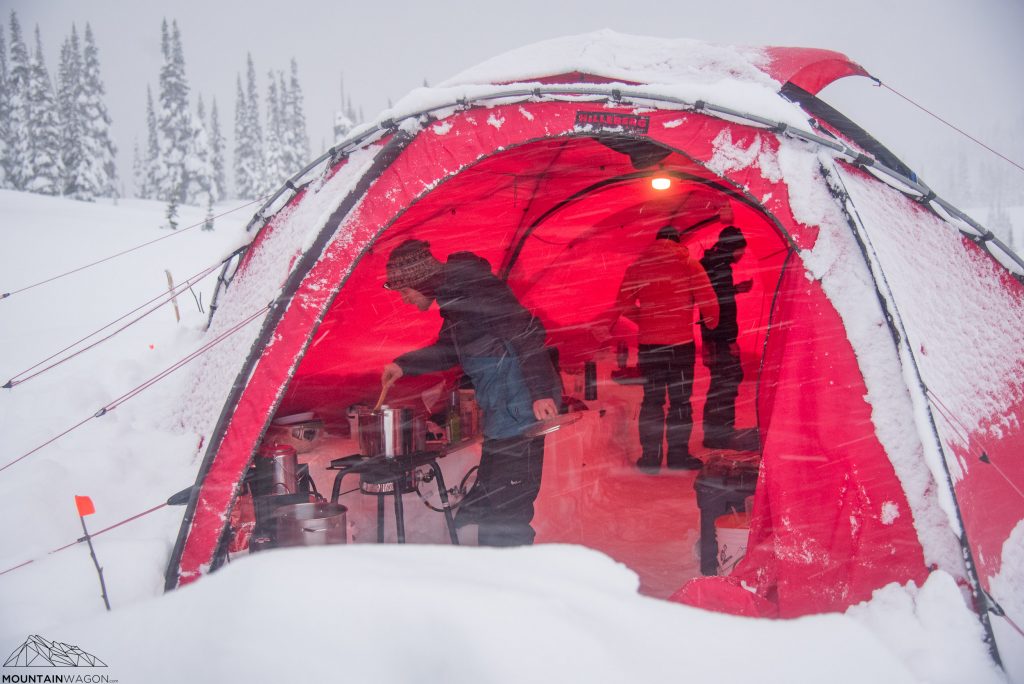 It wasn’t all super easy though.

Over the first two and a half days of the trip, it snowed 70cm before the weather eased up and the weather was frustratingly warm. It’s counter intuitive, but it’s way harder to stay warm when the temperature is -1C than when it’s -15C. 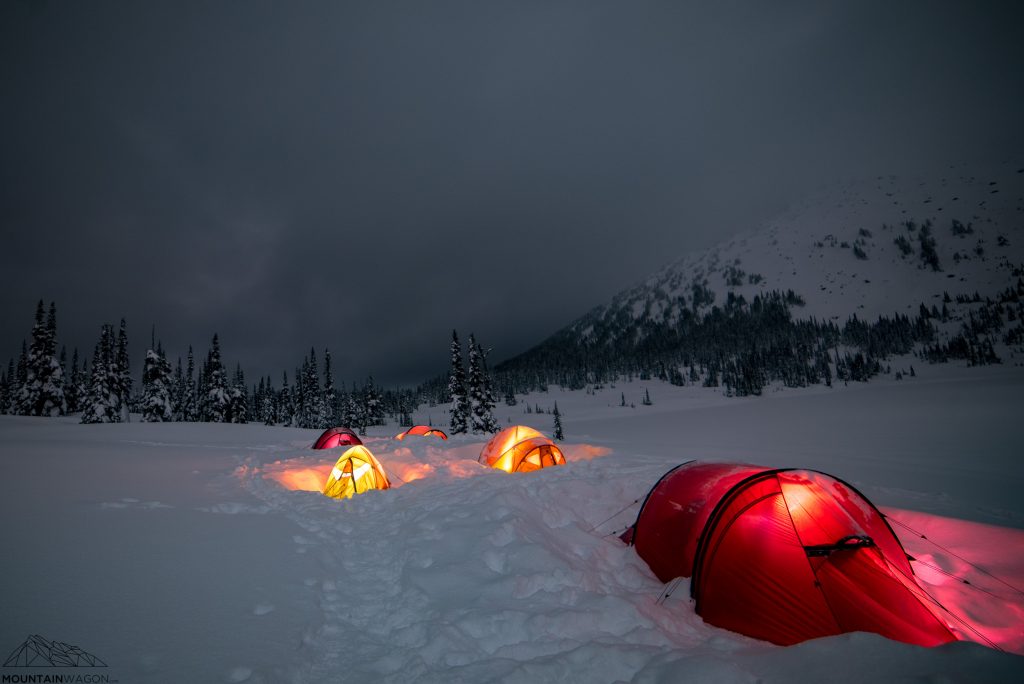 The snow melted on everything. Each of those first days we would get wet while out touring as the puking snow settled and then melted on us. My down jacket became a sodden mess, my sleeping bag was losing a few degrees of warmth each night, and the only way to dry things out was to share my sleeping bag with it. Boot liners in the foot of my bag, spooning my wet gloves. It’s the reality of winter camping when it’s just below zero and even ‘glamping’ with Chilko doesn’t eliminate that. 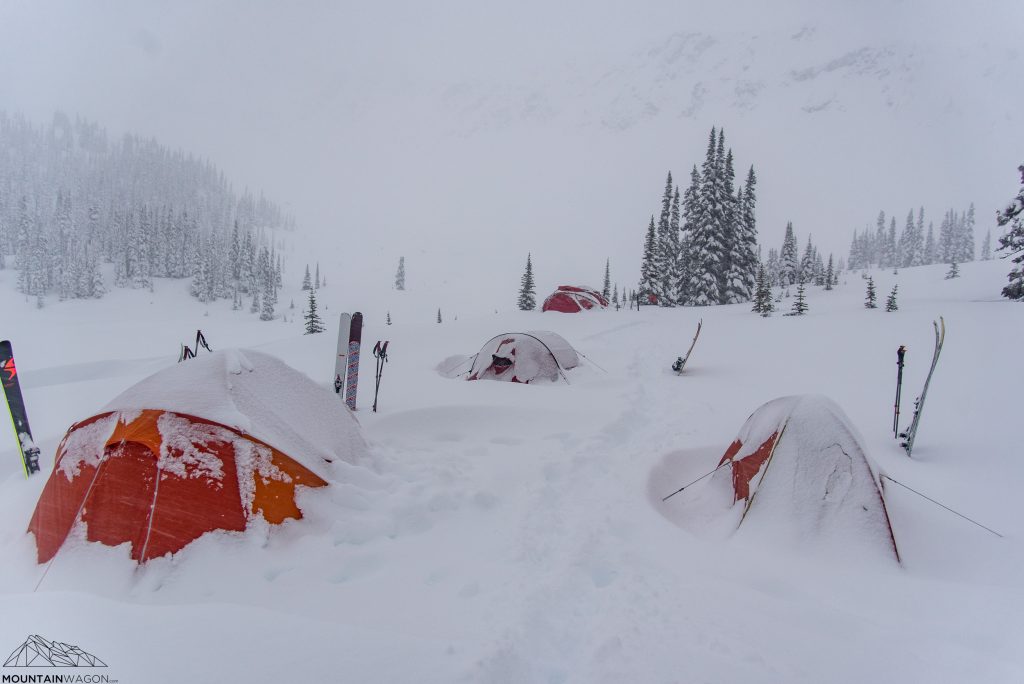 Every morning. Buried in snow. It wouldn’t stop.

What Chilko does do is make winter camping palpable and more than that, it makes it social. Had I been out there with a group of friends in that weather, we would have survived just fine, but we would have cooked meals in our tents, and barely seen each other in the evenings. Those giant common area tents mean that when you get back from a day of skiing untracked powder, you have a place to hang out, get if not warm, then at least a little warmer. 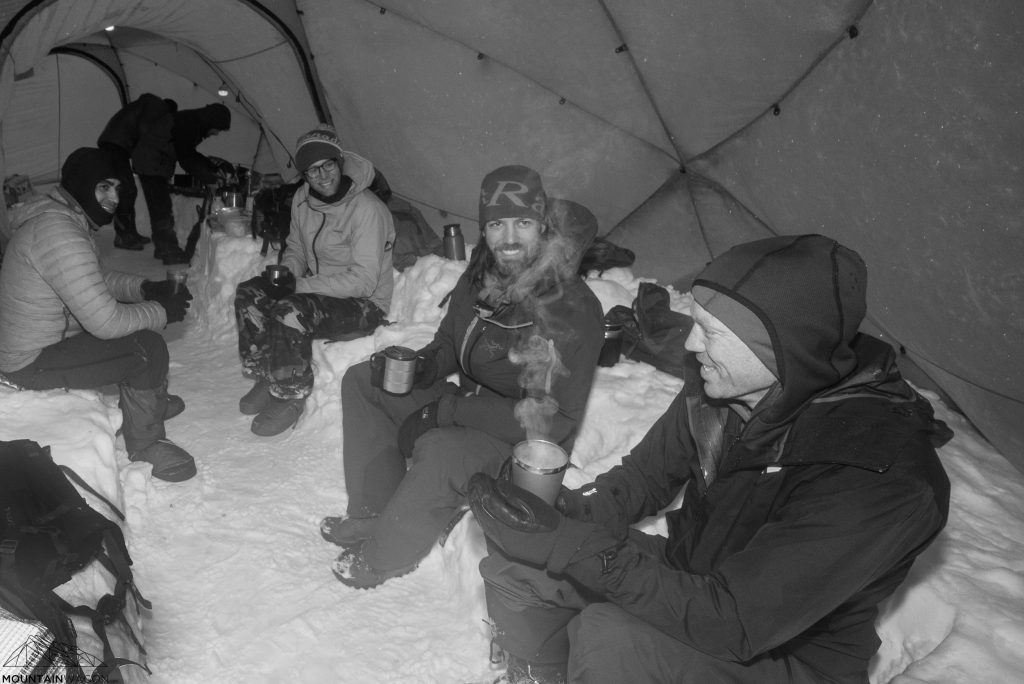 So how was the actual skiing? Well, like I said, it puked on us for two and a half days. 70cm of fresh goes a long way. 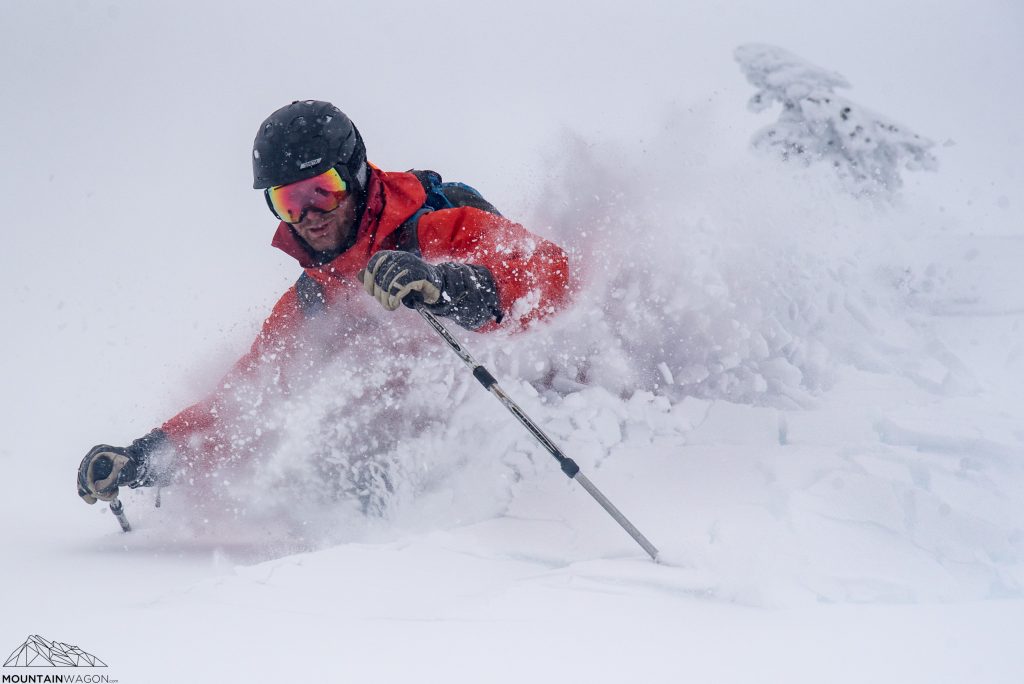 The reality of enormous quantities of fresh snow is that the avalanche danger was a hazard that had to be carefully managed. Sam and David did a great job of picking lines that let us take advantage of the snow while minimizing our exposure to the hazard. 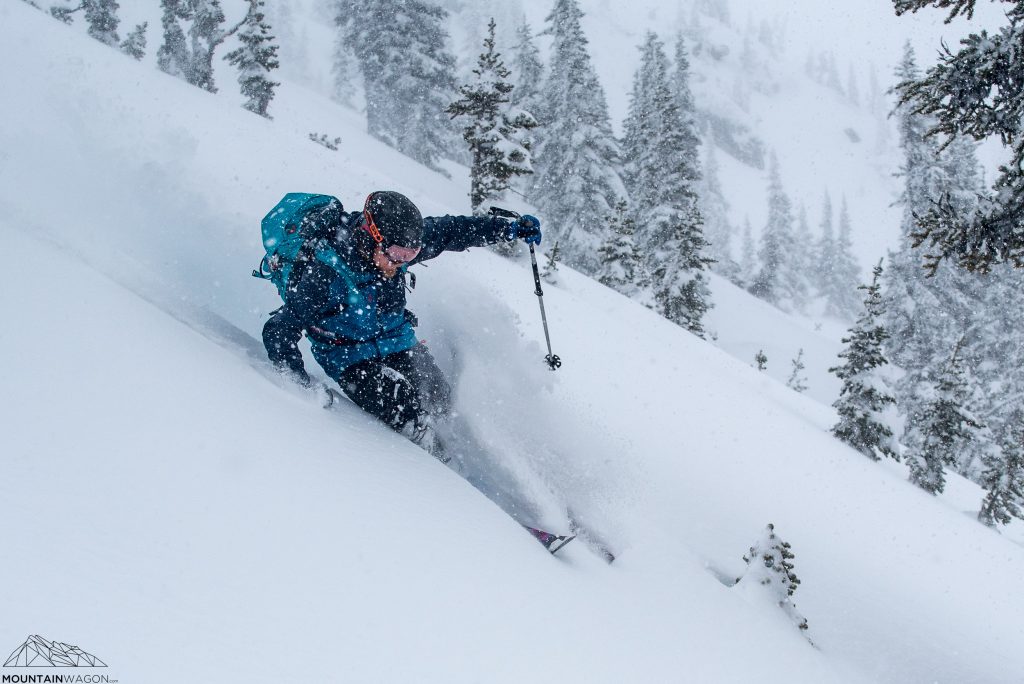 Our five day trip broke down into a day flying in, three days skiing around camp and then a day getting out. The original plan had been to fly out, but we decided we wanted to maximize the skiing so we left David to fly out with the gear while Sam and the rest of the group to skied out. 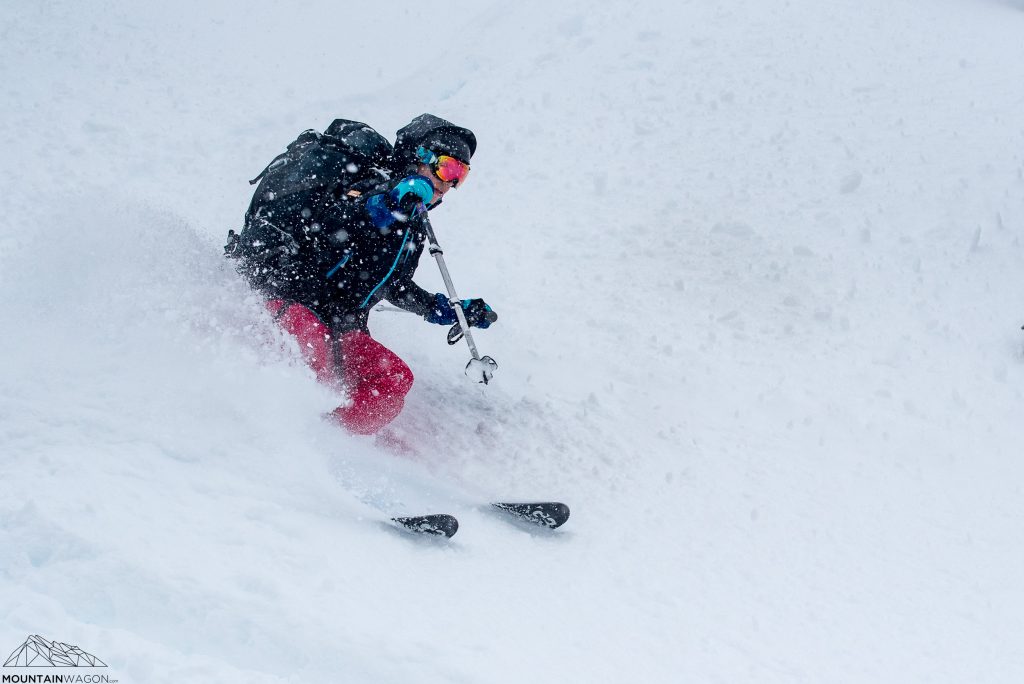 It never stopped snowing. Not saying that’s a bad thing

The plan was two short bumps over ridges, then a long climb to the high point for the day that would give us a continuous line down to the Duffy Lake Road over 1000m below us.

When we got to that high point though, we discovered a cornice blocking our path. I kinda assumed Sam would tell us it was a bust, have us ski down to below cloud line and then call the heli in. Instead, he and I got to work digging a hole in the cornice. Apparently you can ski cool lines with a guide.

Once we’d cut a gap into the cornice, Sam briefed the party on the safe line and then dropped in. The line started at a solid 45 degrees before mellowing out a ways below. 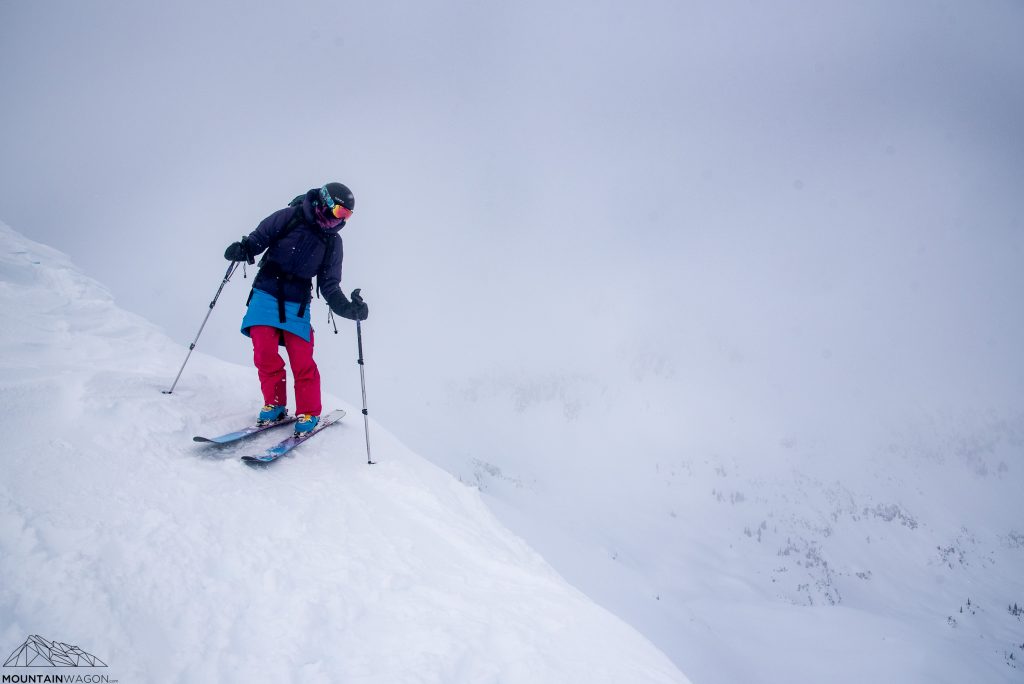 ‘Well that’s steep.’ One of the Pemby Pow participants contemplates the drop in to our 1000m line

One by one we all dropped in. It was 1000m of almost continuous skiing only interrupted by one quick skate across a lake.  That single line had steep alpine, mellow alpine cruising, pillows, cruise-y trees and basically every other terrain feature the coast has to offer. Skiing that line out to the highway like that was an incredible way to cap the trip.

When I do trips like this on my own there’s an enormous amount of front end planning and coordination. For the Pemby Pow trip with Chilko I packed whatever was on the supplied packing list and then showed up at a bakery. It was less work than a day of ski touring.

Ultimately, what Chilko does best is make things easy. With upcoming destinations like the Waddington Range, Sam’s taking Chilko Basecamps into huge terrain in a manner that makes things straight up easy.

Don’t have time to figure out logistics required to fly into some remote mountain range? Don’t have the experience to do it? Want to access epic terrain while eating amazing food but don’t feel like dropping a butt-load of money on a swanky lodge? If you answer yes to any of those, then signing on with Chilko is definitely worth it.

For more words and photos by Phil Tomlinson, check out Mountainwagon.com