This is a boot for an aggressive skier, who demands high performance and who’s main value is focused on the ski down and not the up track.

I have used this boot exclusively this year, mostly as a ski hill, sled ski, and side country ski touring boot (with the tech soles). I’ve been avoiding long touring days with expert fast crews on these boots because there’s too much resistance from the stiff liner for me. 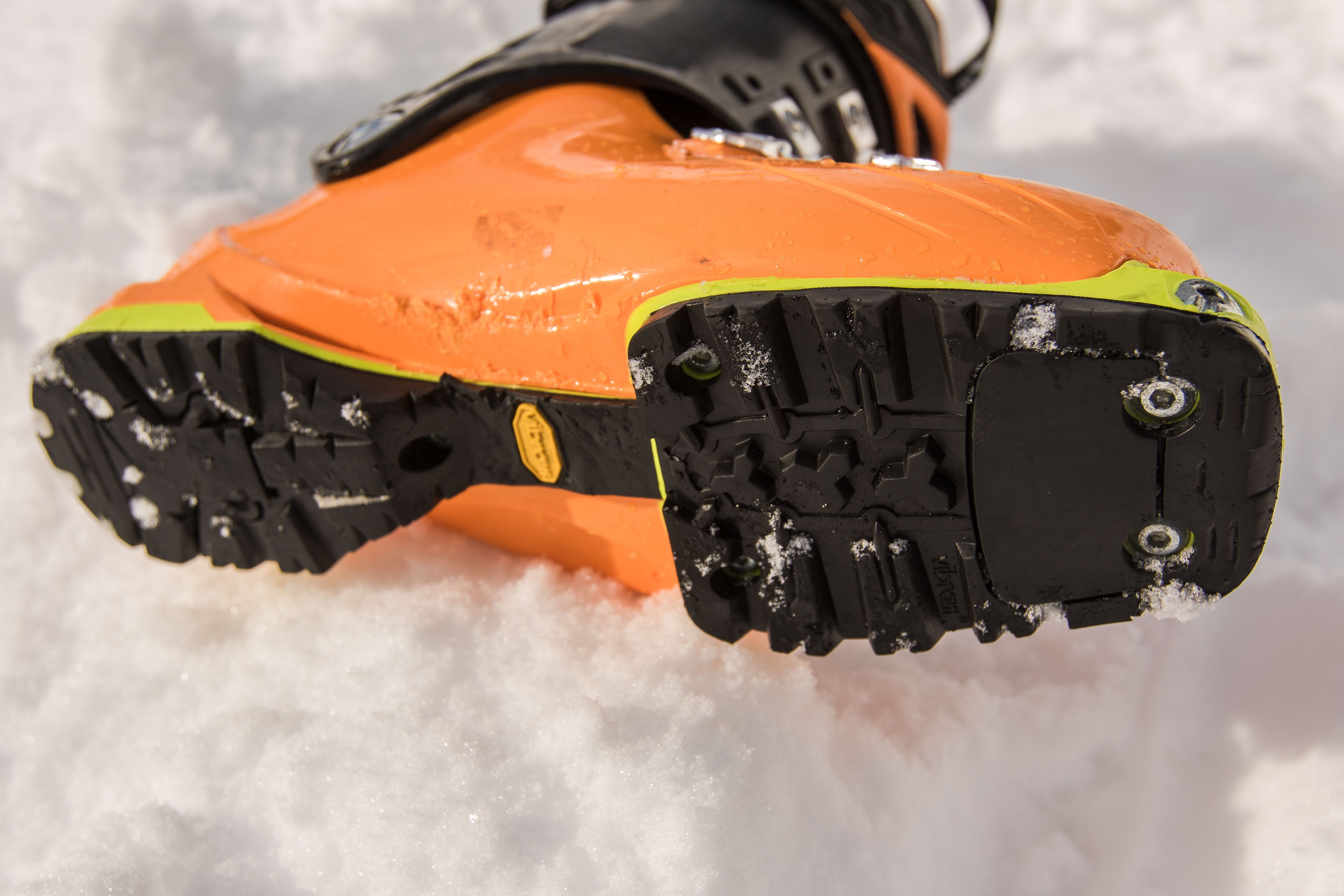 Vibram sole is a major plus. Scuffs after 5 days of sled skiing (not bad).

This is the boot I wish existed when I was 20. In those days we ski toured in race boots because we wanted the performance and suffering on the uptrack was a secondary issue.  Back then, I would have given my left nut for the RS 130, which is so much better than a regular ski boot.  Sadly, now that I’m twice that age, I have to admit that this boot is probably too much for me.  I also know there are several satisfied shredders out there with this boot because I’ve tried to talk to as many as I could who I’ve seen wearing it.   The 130 flex feels legit but yet the boot is light weight (1990g; 4lbs 6oz) compared to a regular ski boot.

The person who would really like this boot is looking for performance-focused skiing and can use the same boot on resort and backcountry days alike.

Gotta say that I love the Vibram Mountain Plus soles.  I’ve used other non-Vibram name brand boots in the past and straight up, they’re not as good. I do a lot of my playing in the Purcell mountains and there’s a lot of sharp shale underneath the snow here that can eat a boot sole in a single ridge walk. Snowmobile running boards are also notorious for destroying boot soles within days. So far (after about 15 days of use) I’ve been pleasantly surpised with the durability of these soles on the Freedom RS 130. 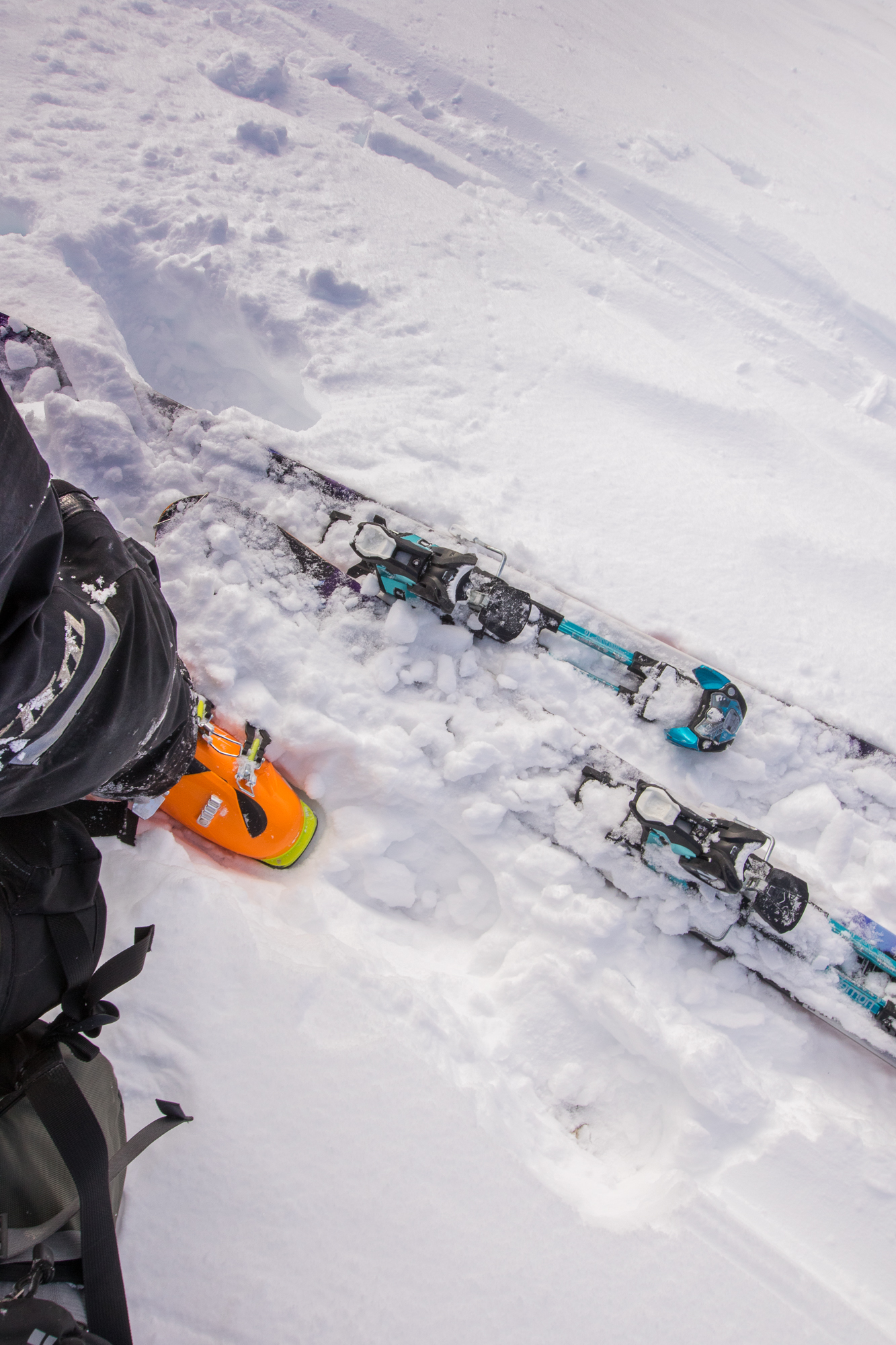 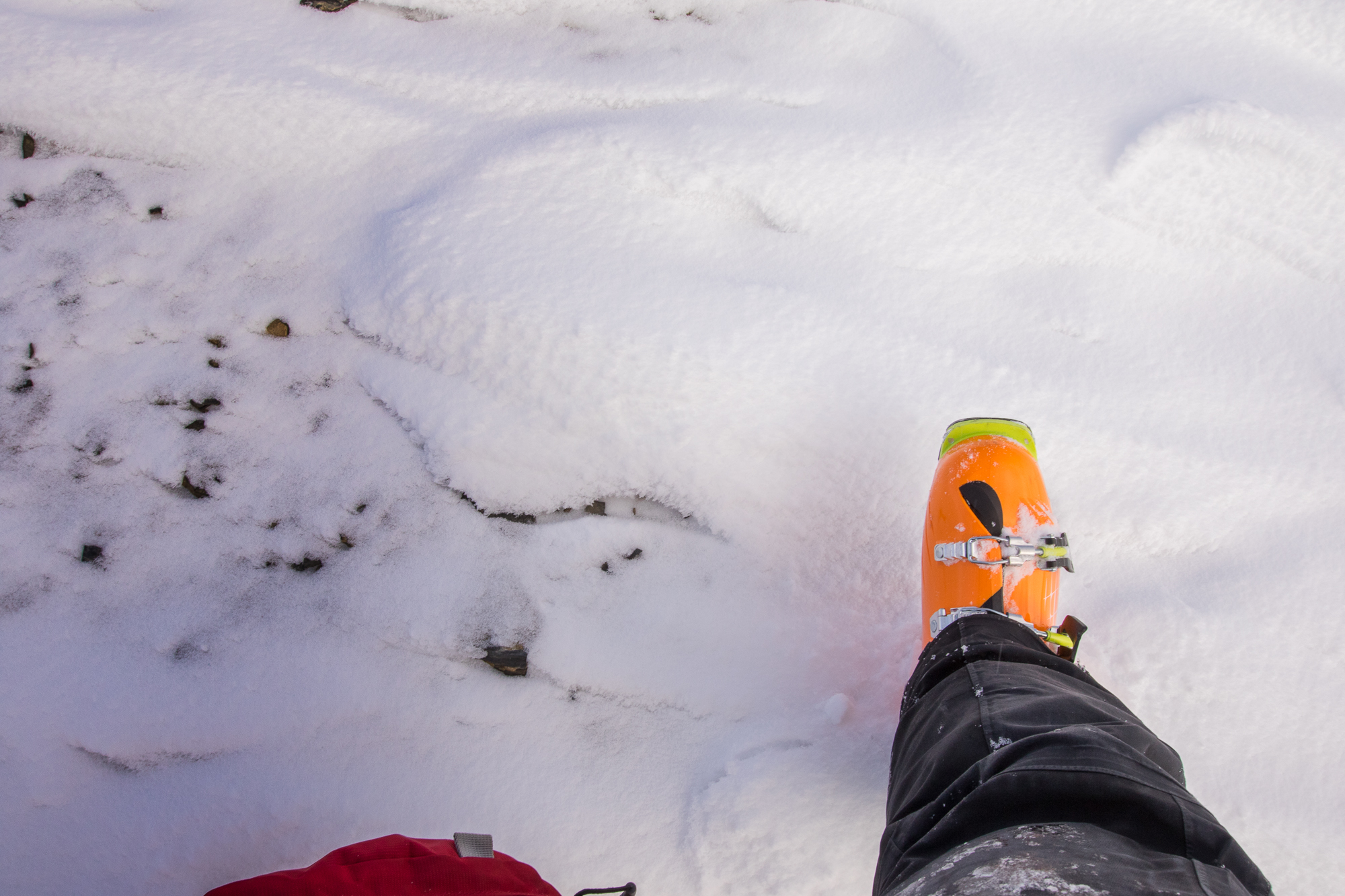 Scrambled on these rocks to find deeper snow and the soles stuck to the rock well.

I consider myself a connoisseur of walk-modes and the Scarpa Freedom RS 130 has the best walk mode buckle in the business.  Not only is it easy to change modes but it I have yet to encounter a situation where I couldn’t engage back in to ski mode. This winter has been exceptionally cold, and I’ve been wearing mittens quite often, yet flipping my boots into walk mode on the Scarpa Freedom RS 130 has been no problem because the leaver is easy to access and I can change modes in a flash.  I flip in and out of walk mode every run because I love the relief that having the range of motion (25 degrees) gives me. Even more importantly than the ease of use, is that the walk-mode is functional every time I want it to be. Other walk modes I’ve used can get snow jammed in them, which renders them useless. Nothing is worse than finally being on top of a run and not being able to click into ski mode (or to have ski mode disengage half way down). So far, I’ve had no issues with the Freedom RS 130 getting back into ski mode and I’ve purposely tried to make this function not work.

The robust interface and locking system that engages ski mode does not hold snow, or is easily cleared. Bravo Scarpa, the quality of design here is well appreciated. 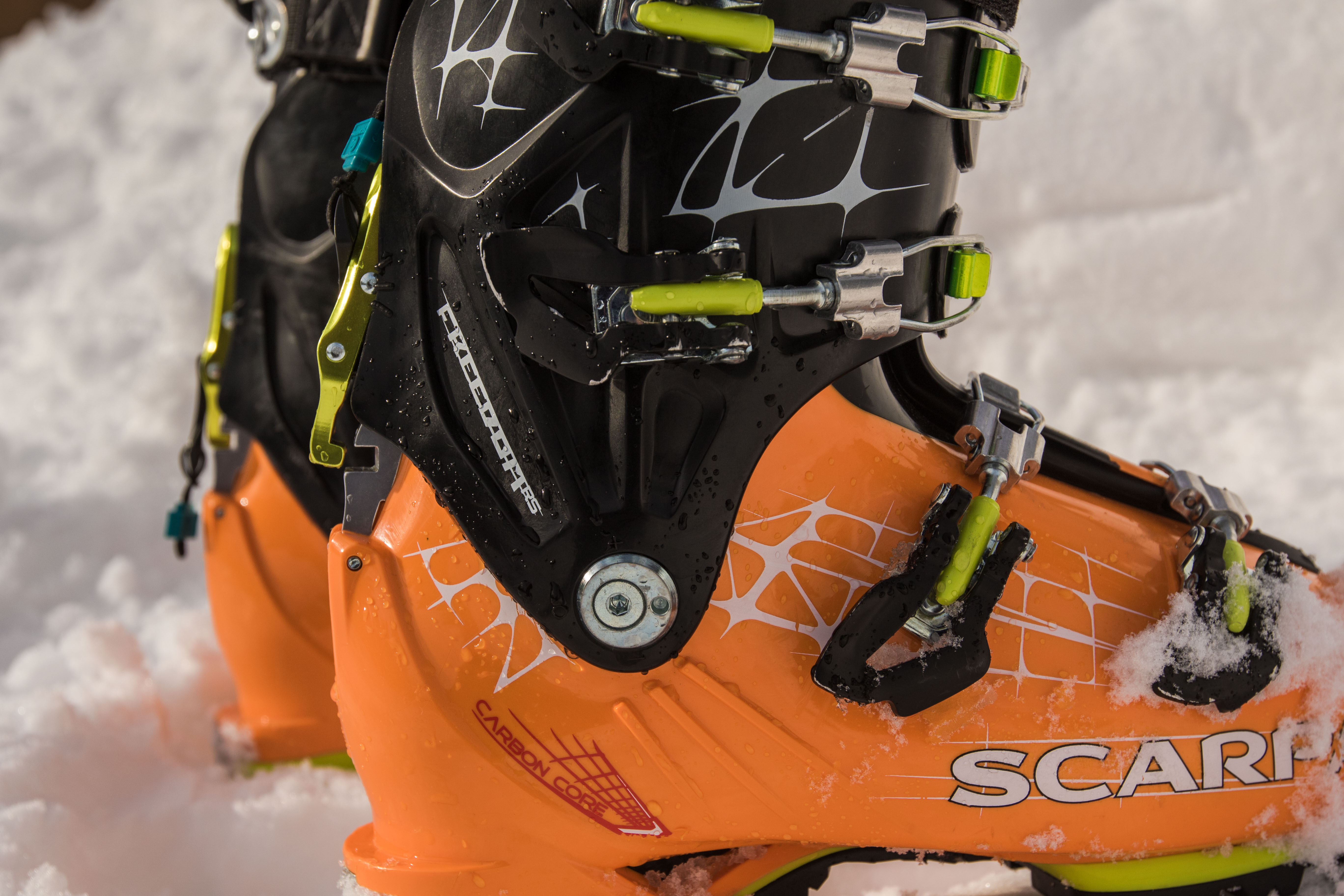 Walk mode is easy to engage. Better yet, it never seems to get stuck. Power Block XT tech does its job well. 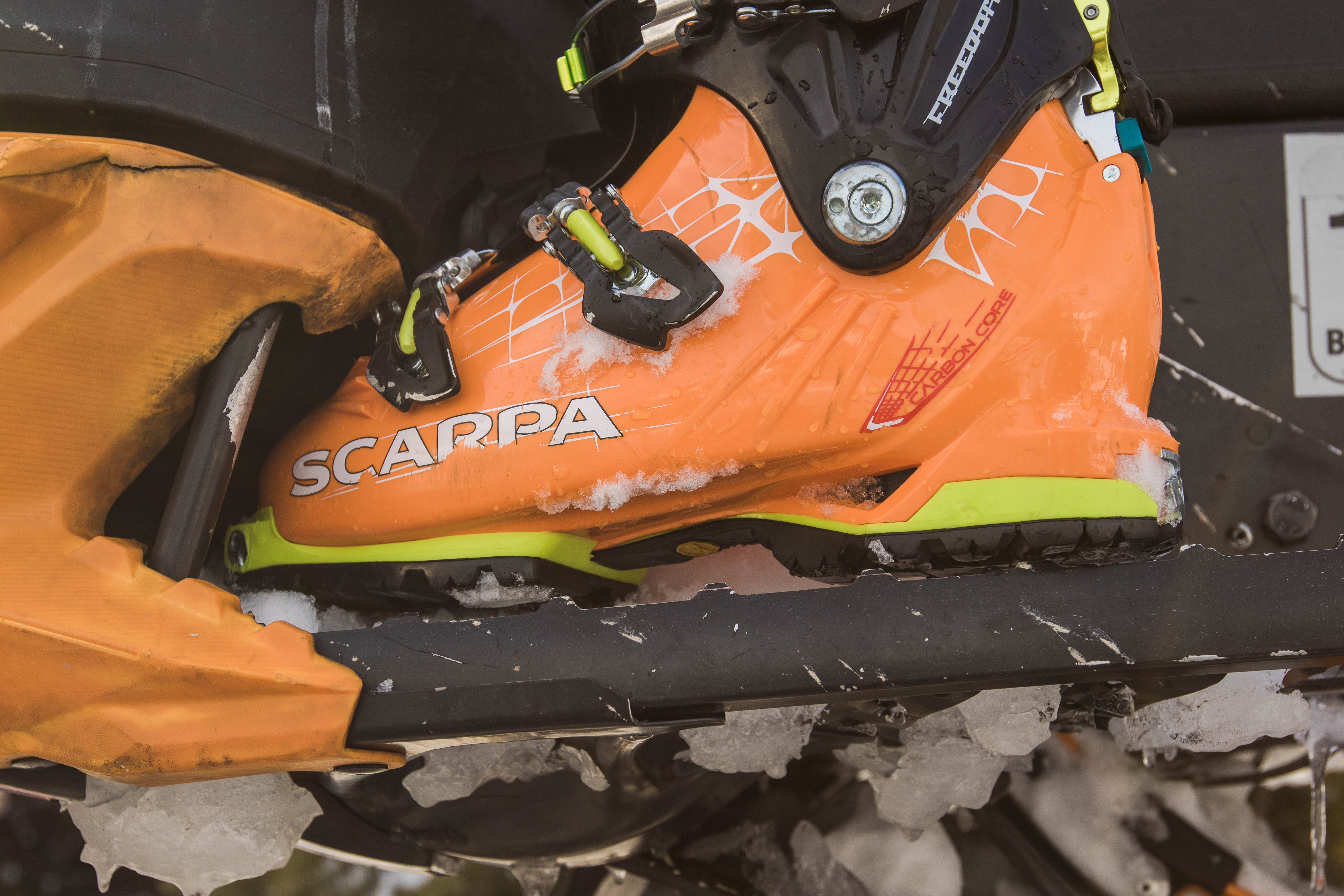 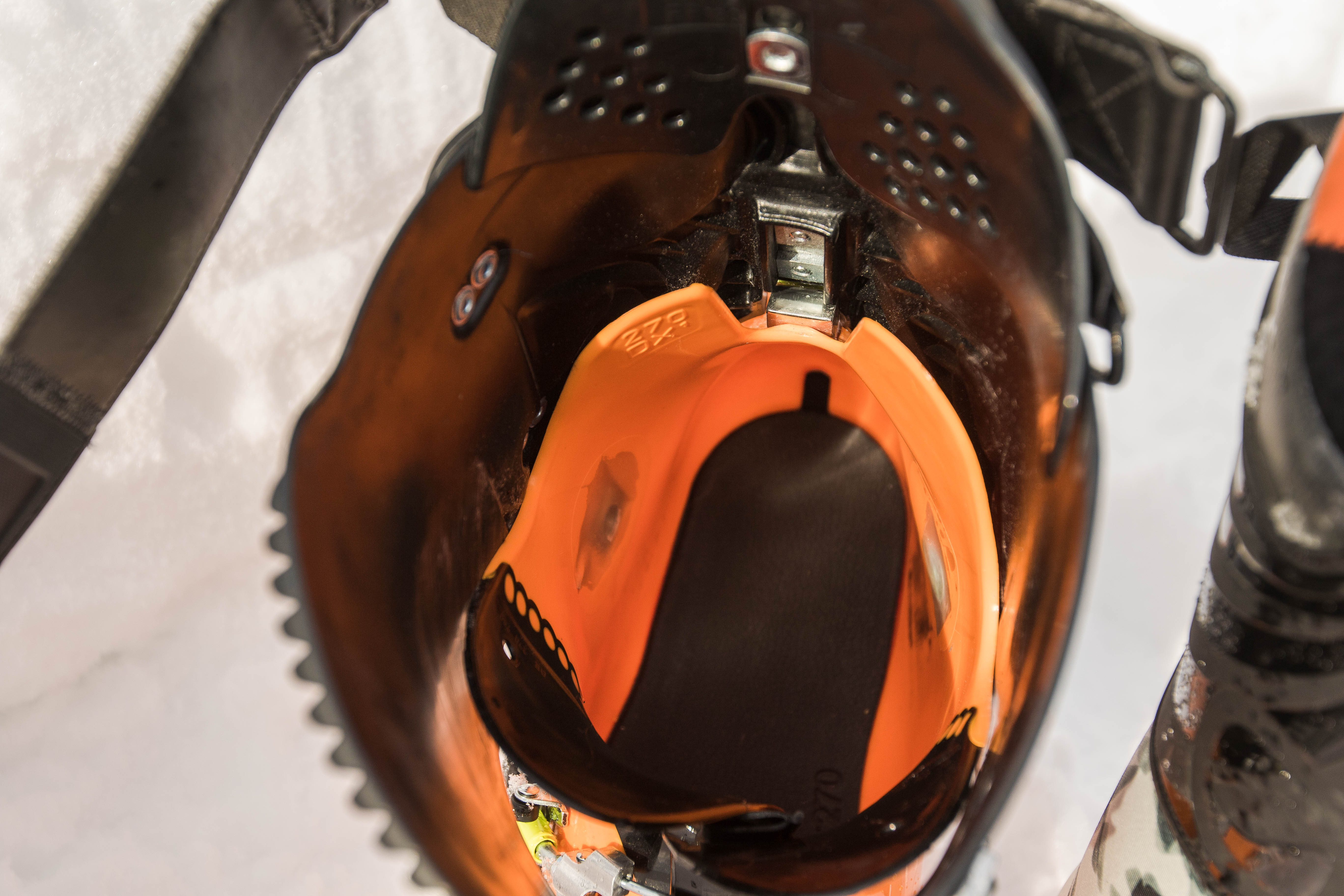 Inside the boot with walk mode engaged. 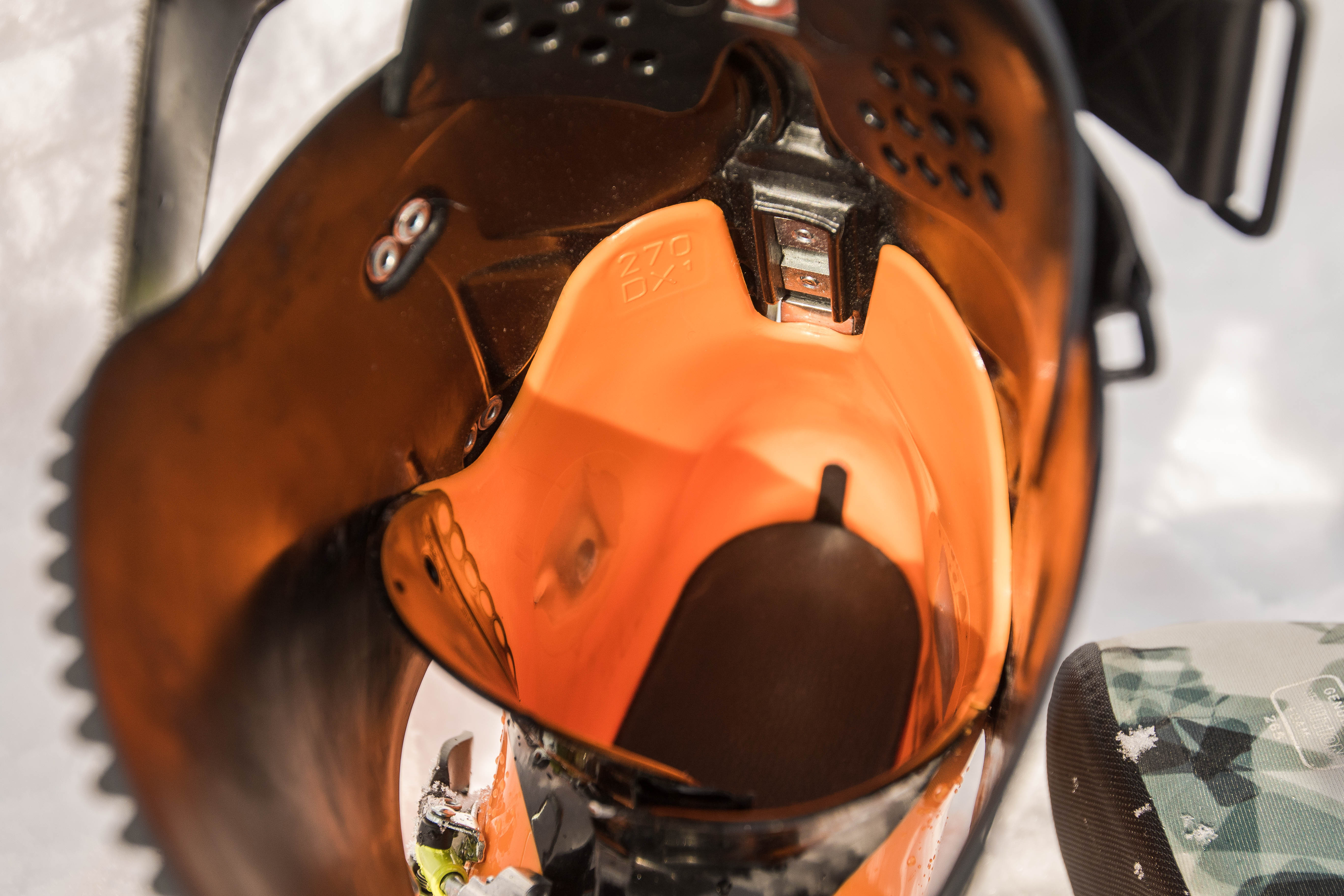 Inside the boot in ski mode.

Some boots are hard to get on and I haven’t had much trouble with the Scarpa Freedom RS 130’s. The crux of this test was a -30 degree sled ski day where I approach with my boots in my CFR QP bag. Putting the boot on, in the snow at cold temps without too much hassle is a plus. 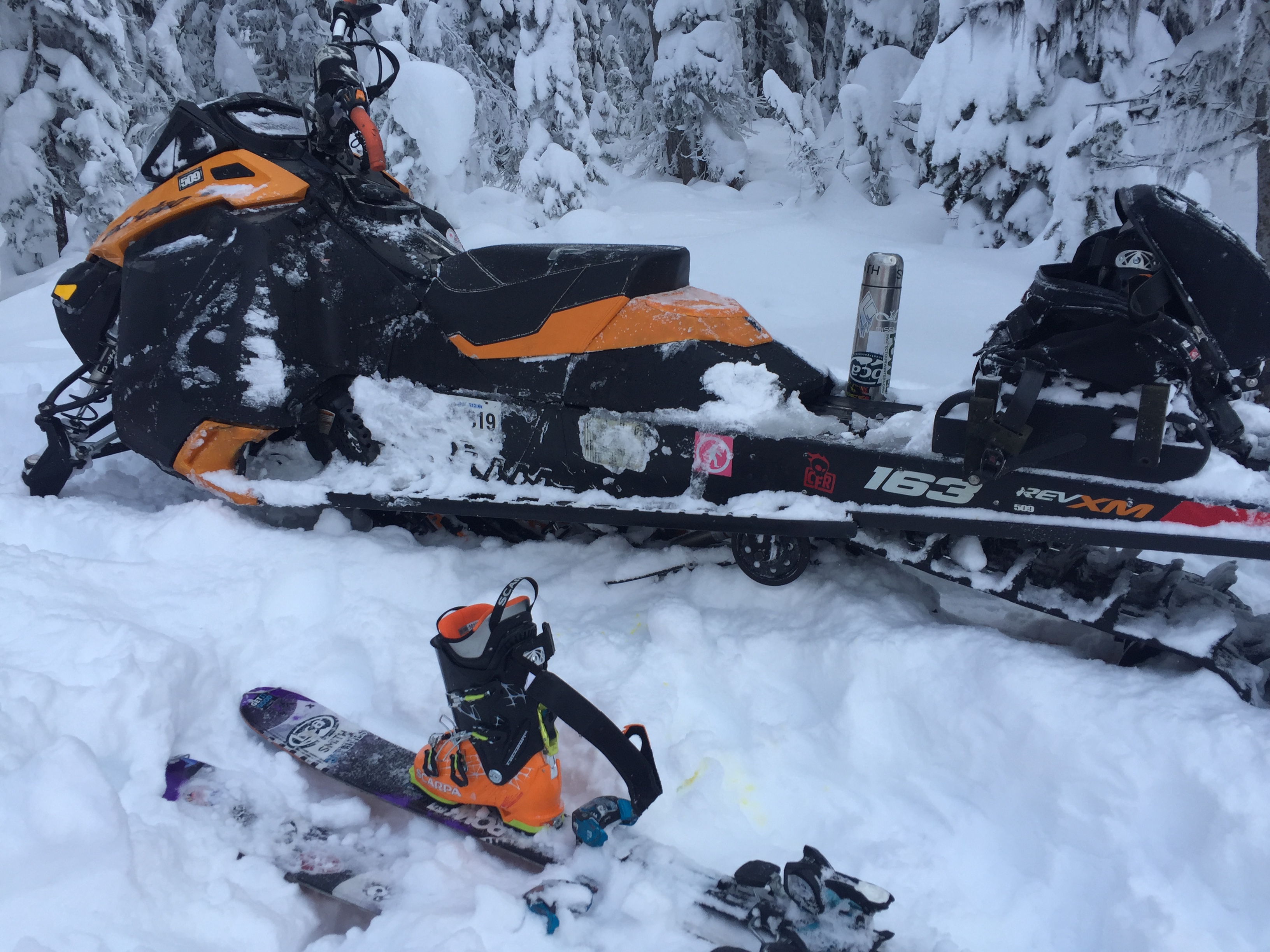 -30 degrees in the shade and it’s time to put boots on. Things didn’t go too bad. 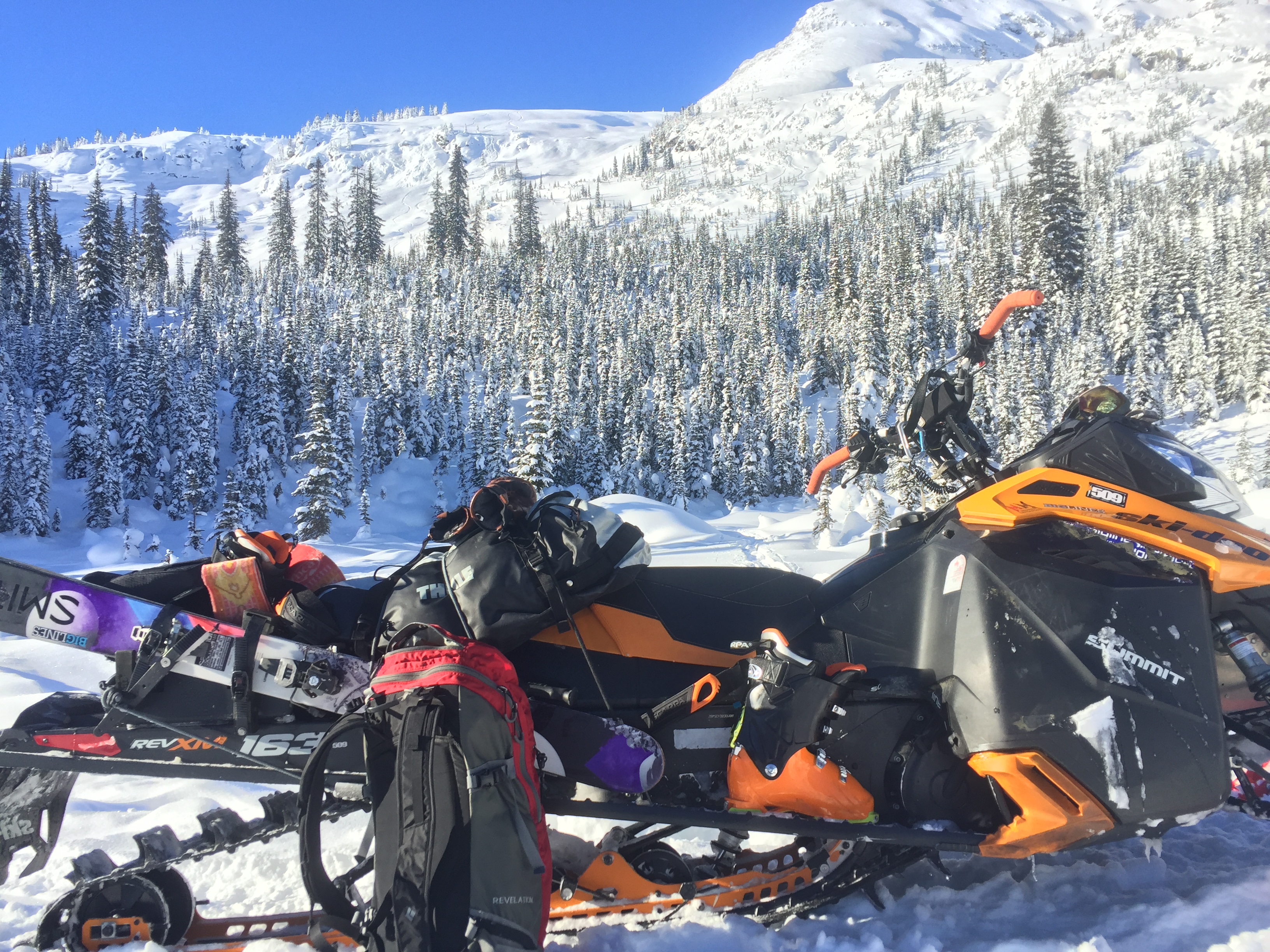 Another – 30 day, but at least it’s bluebird. Time to put the boots on. 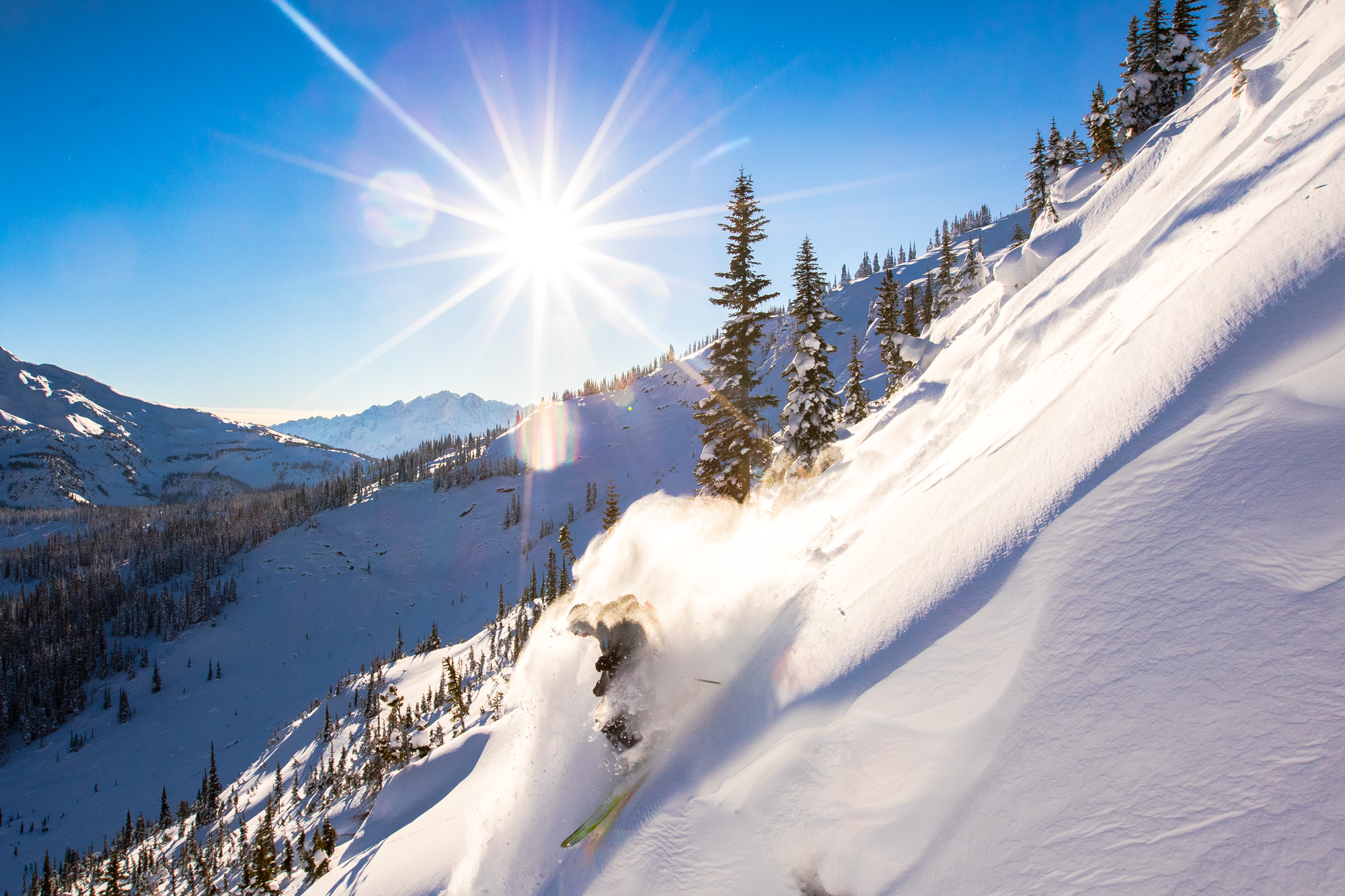 I really like this photo of my friend BP that I got this day.

How does it tour? 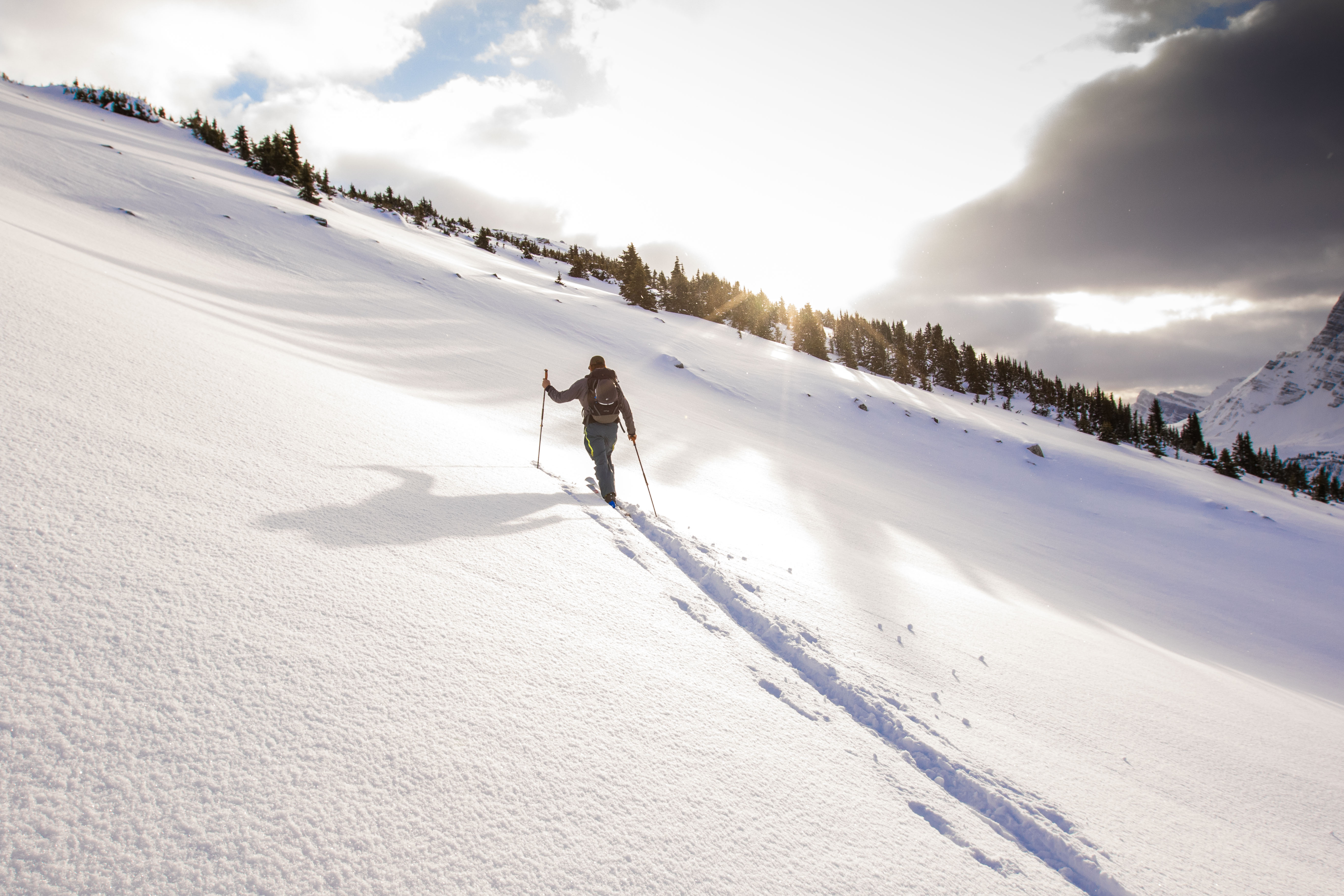 Following Kevin Hjertaas on a personal ski day on the Freedom RS 130’s will hurt.

The biggest plus or minus of these boots (depending on what you want in life) is the stiffness of the liner. For me, long days of touring just aren’t in the books with these liners because they are too stiff. Nothing eats at my motivation more than knowing how much easier things could be, and the liners of these boots have extra stiffness sewn in to them that causes resistance in a ski touring step. A young athlete who demands performance will power through these inconveniences and if the whole crew you’re with is on boots that are performance-based then you should be fine. However, I would never try to keep up with a fast, ski-mountaineering crew that takes its first break when they get back to the car; it would just be too painful. 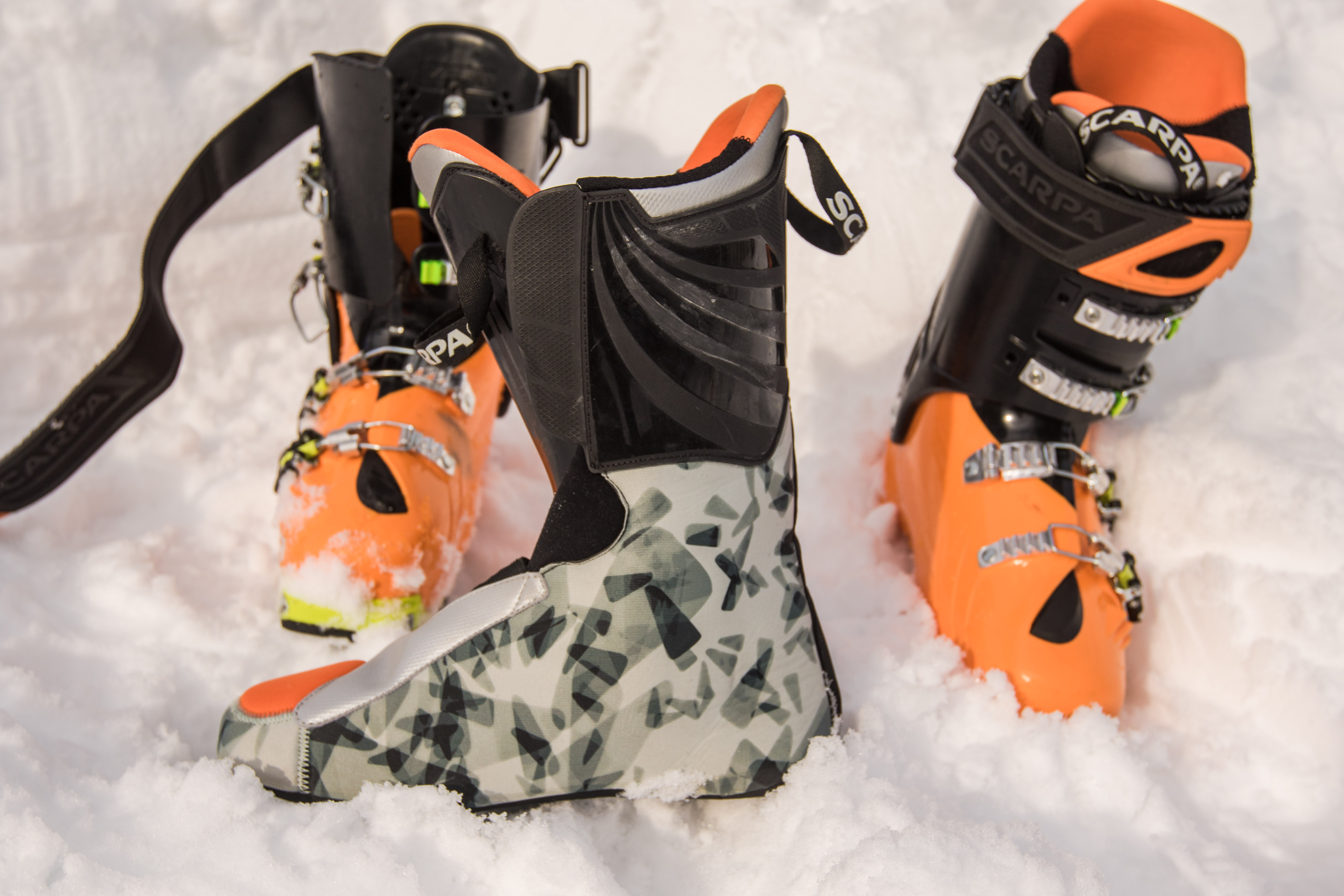 The cuff and tongue of the liners have stiff plastic sewn in to them.

For smaller touring missions, like from a sled, or lift-accessed side country, these boots rule because you get the joy of having a rad pair of sh#t kickers on your feet when you hit the top.

There’s good and bad features on the buckles of the Scarpa Freedom RS 130. I really like how the top cuff buckles hinge all the way forward. If you undo your buckles a lot like me, then it’s nice not to have buckles pointing sideways. This is good for bootpacking and also you can hide that your open buckles under your pants and not have them ride up on sideways buckles. 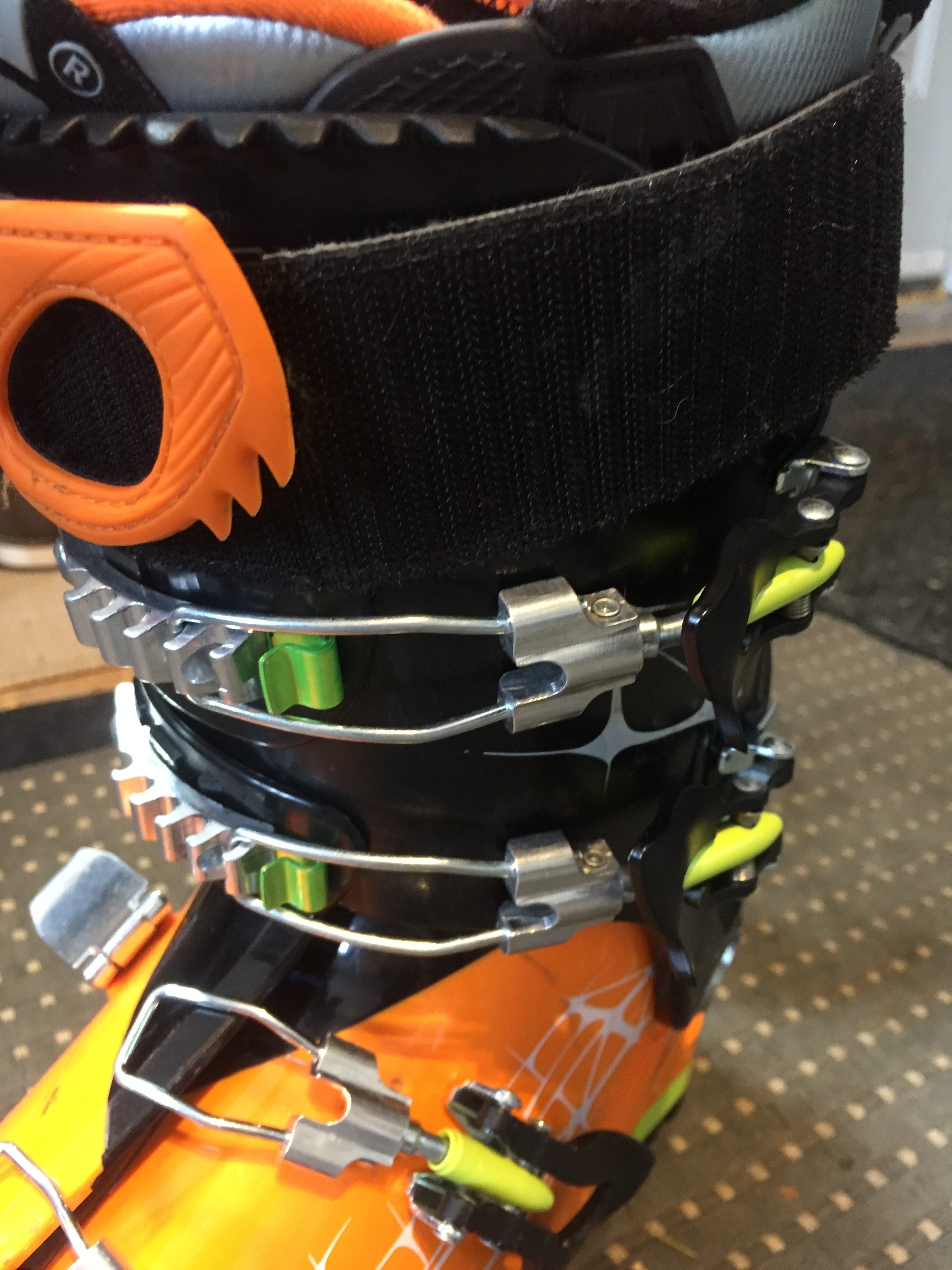 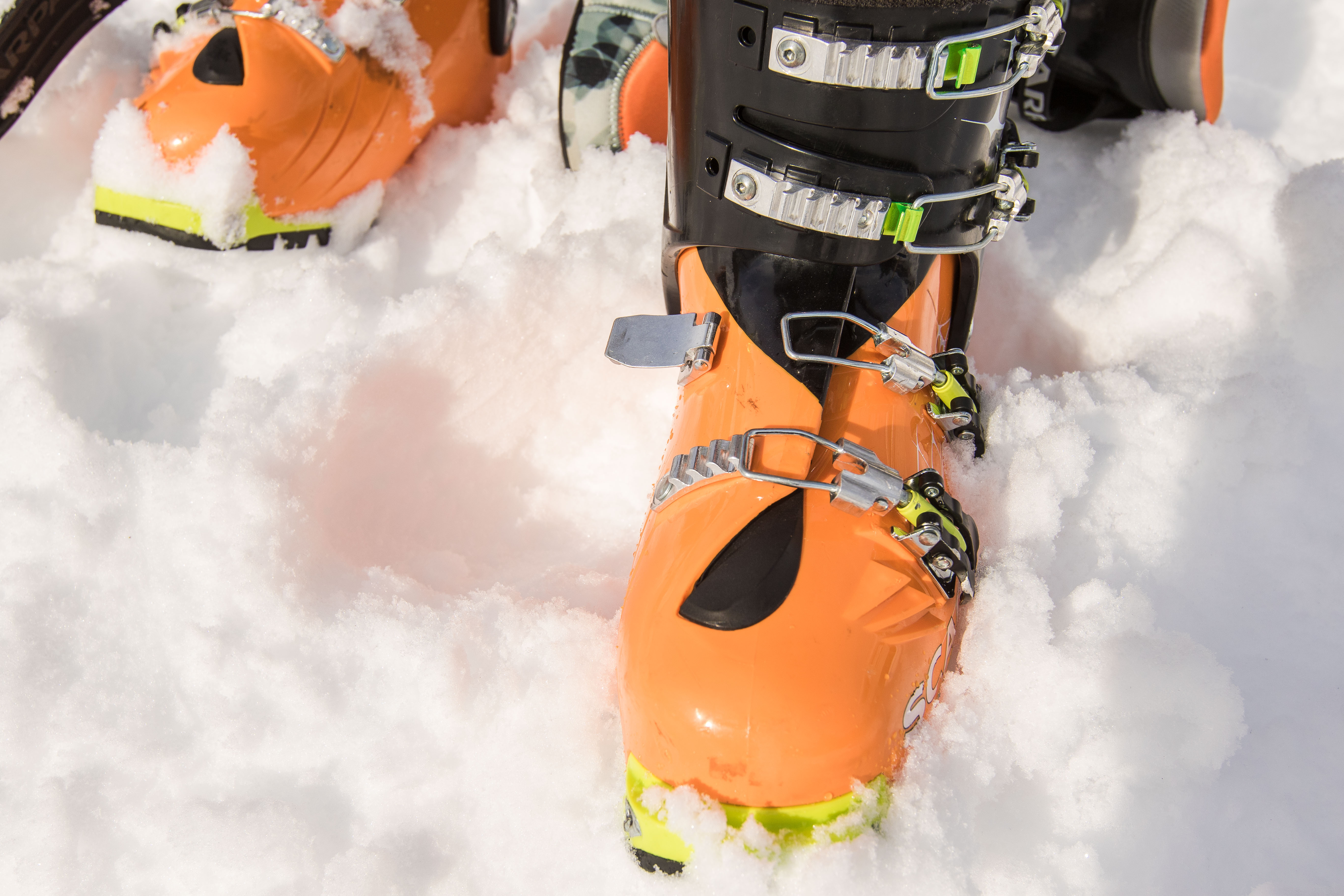 The 3rd buckle down, flaps open when it doesn’t have a bail on it. I don’t like this.

I hate that the 3rd buckle over the feet can flap open when not buckled. I have a high arch and I rarely do this buckle up because it’s uncomfortable. But if I don’t do this buckle up then it flaps open and gets caught on stuff. My first day sled skiing on these boots I ripped my snowmobile seat, which was a piss off. This buckle’s motion is presumably so that it can adjust better but in my case it sucks. I have since epoxied the hinge shut so that it doesn’t flap. So far so good. 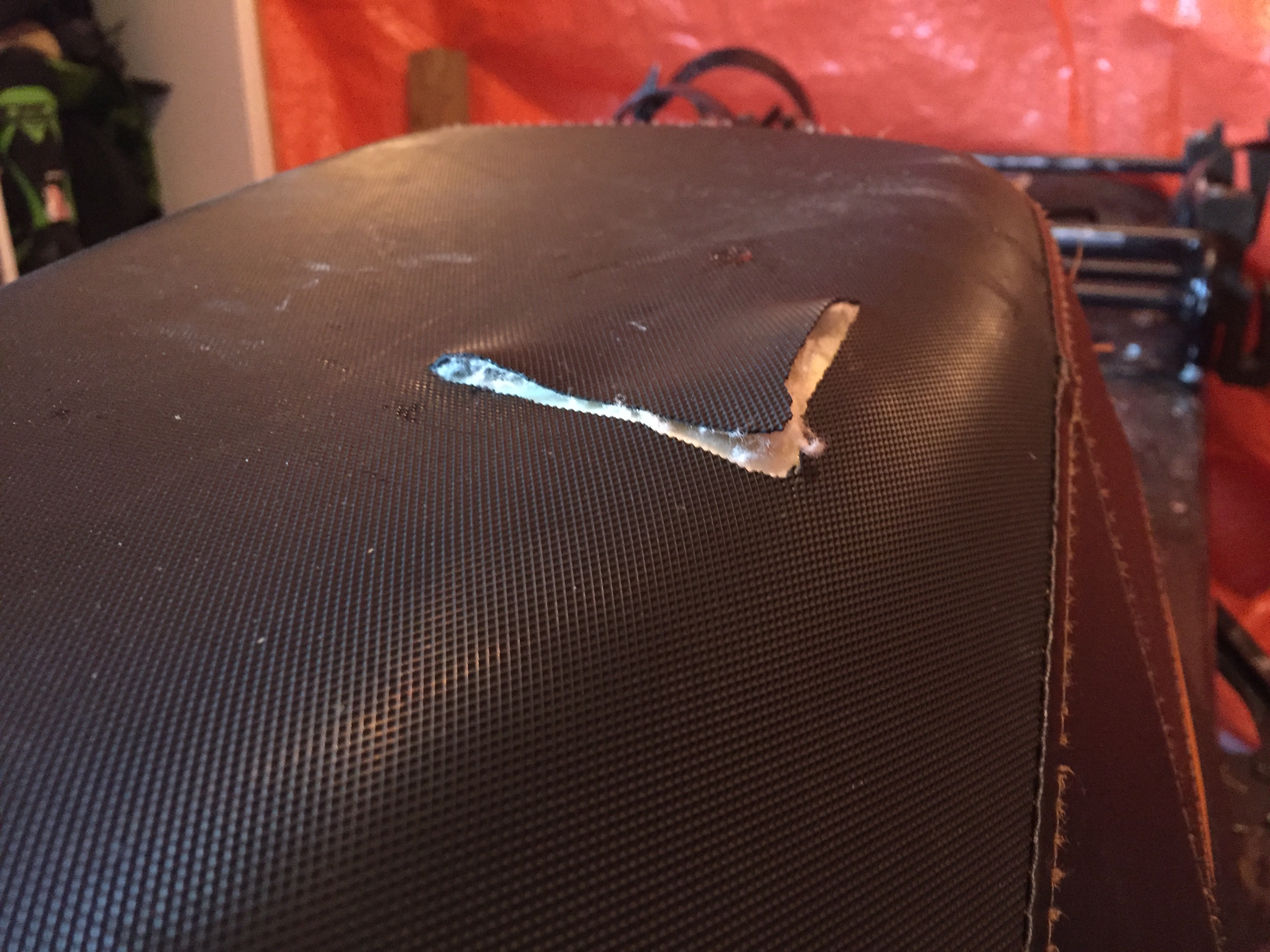 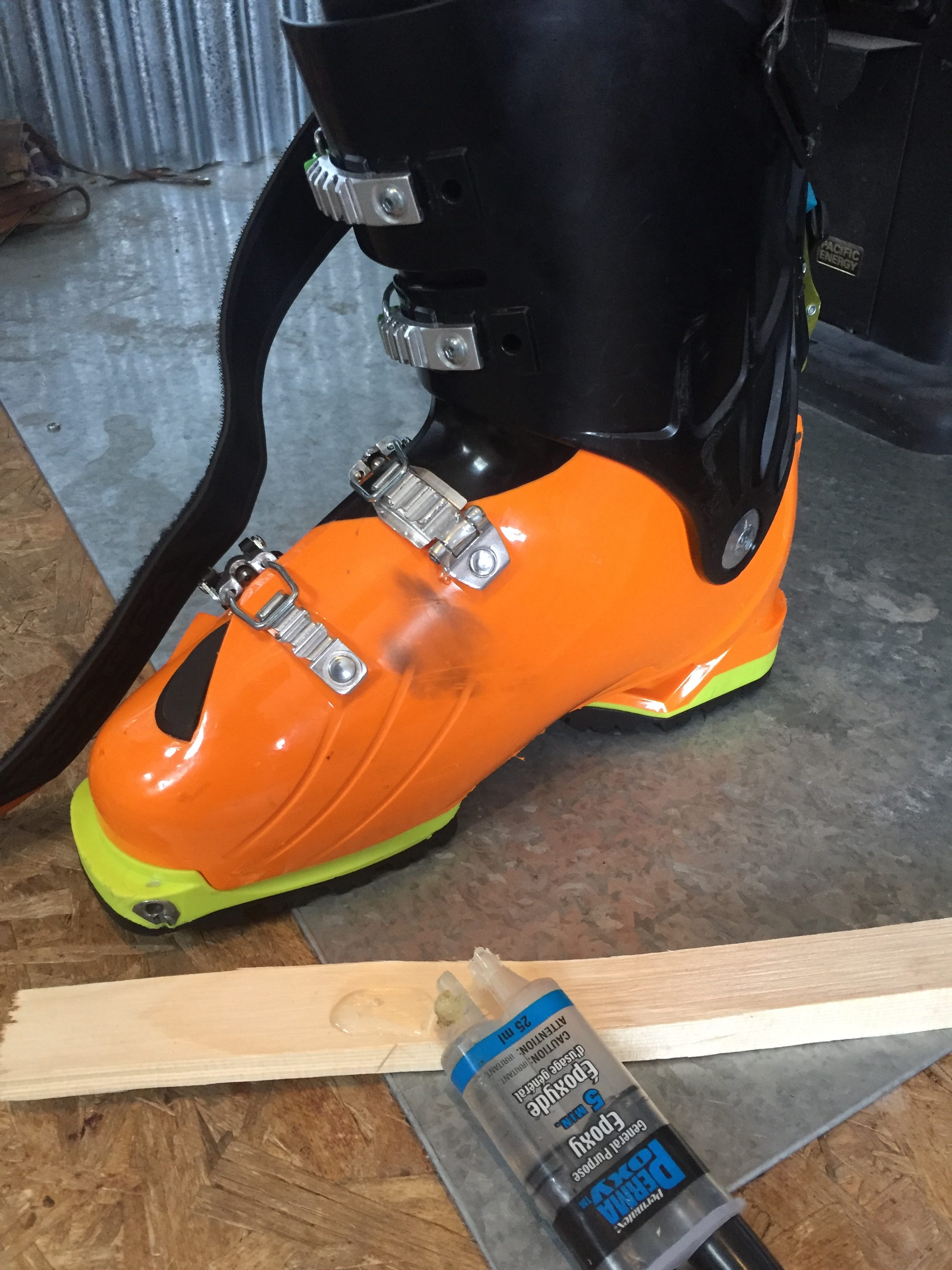 I used epoxy to stop the 3rd buckle hinge from flapping open. 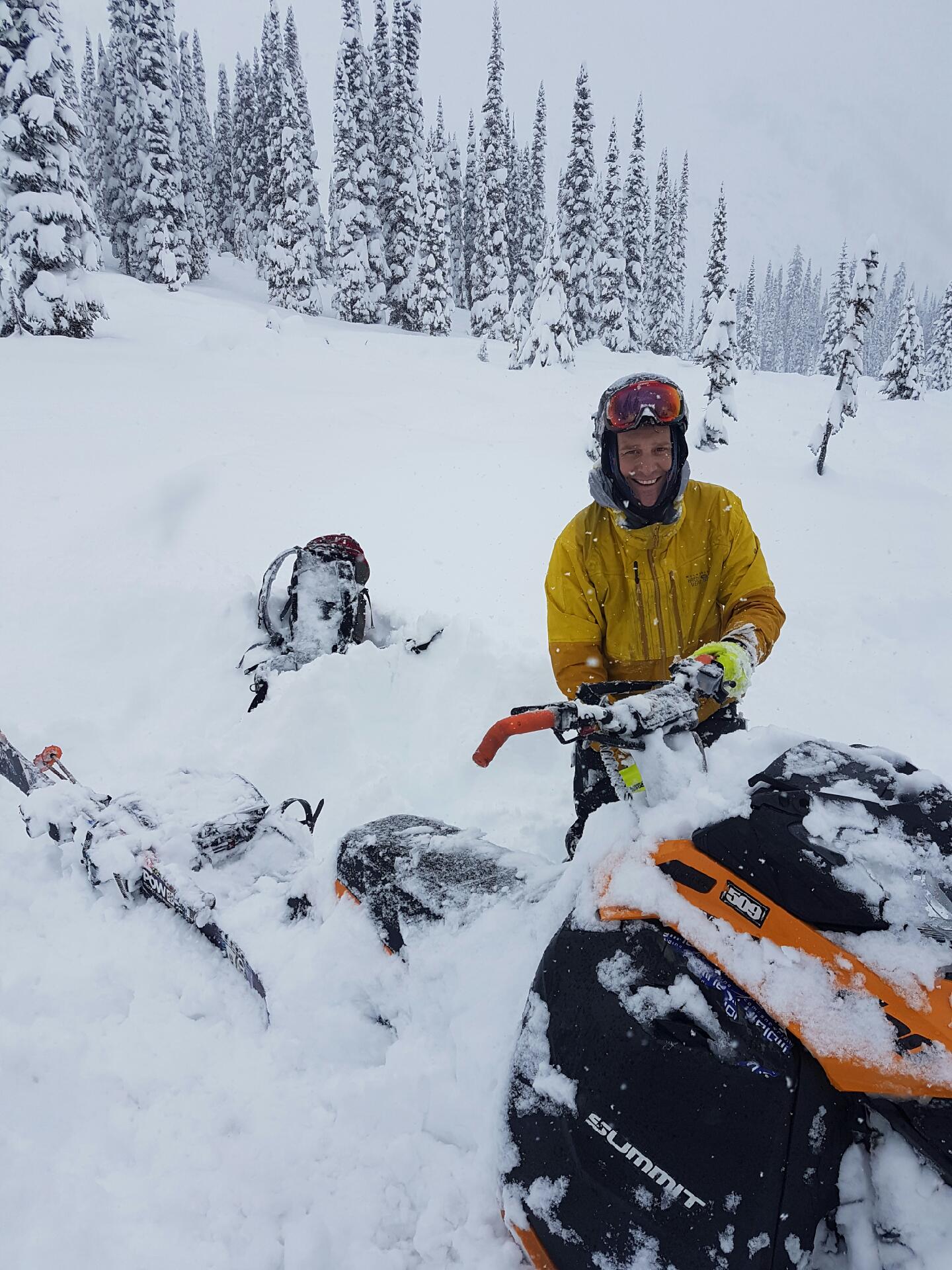 Dude, the reason I’m stuck right now is totally because my ski boot got caught on my seat… right?

The liners of the Scarpa RS Freedom 130 are the area I have had the most trouble with. I’m still on a journey to find my perfect fit here. I started off with the liners as stock (no adjustments), for a couple days. Next I added my moulded footbeds and I also heat moulded the liners in an oven. The liner is very firm, there’s not a lot cushiness to it and therefore it has very little give. I have the full range of Dissent socks and they have helped. I’ve been experimenting with super thin sock with my footbeds in but because it’s been so cold this winter I’ve struggled with frozen toes. I recently sat in the judging pit at a Jr. Freeski comp and wore my boots the whole day because I took my foot beds out and that allowed room for a disposable foot warmer. 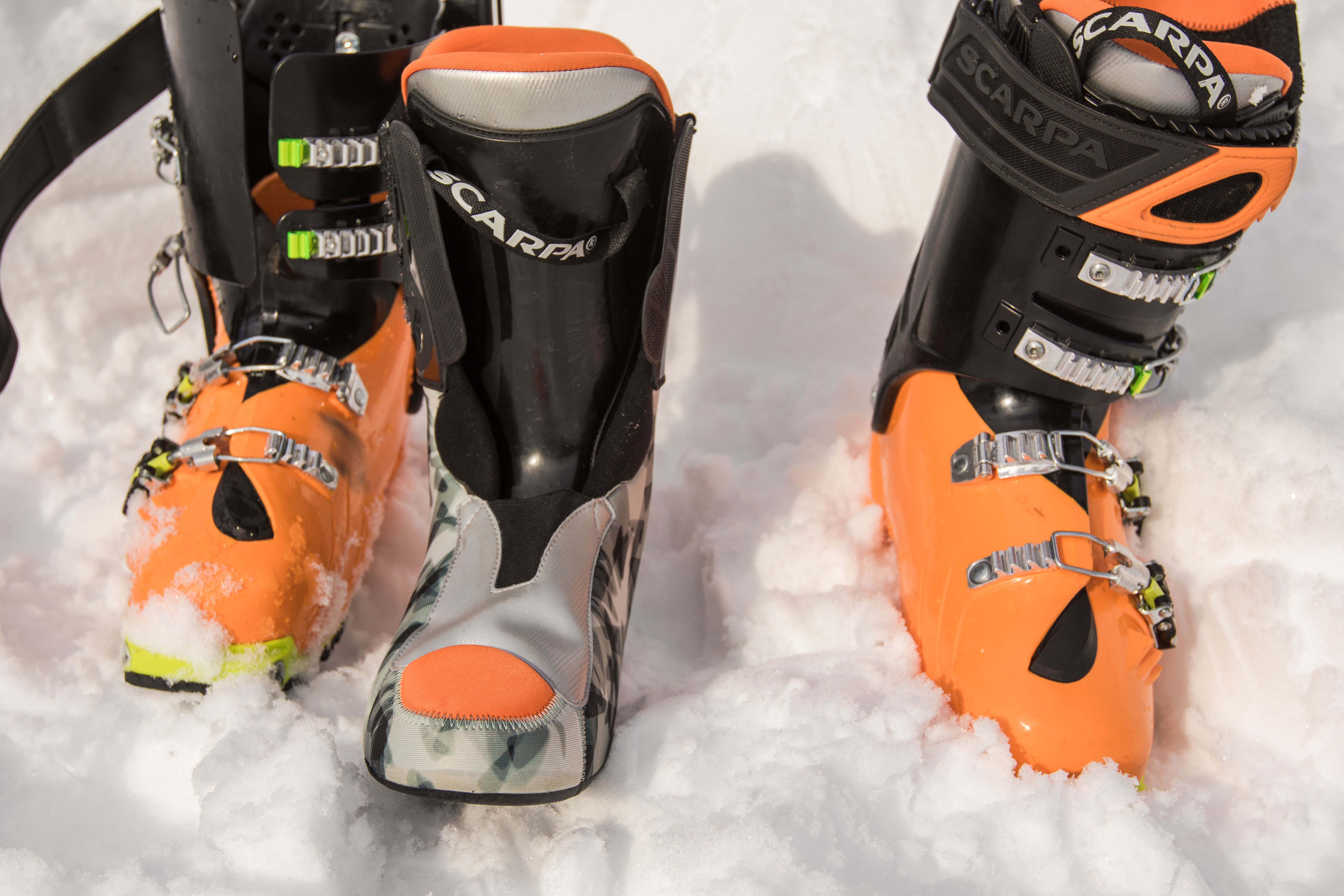 I am now at the point where I can spend all day in these boots. I’ve also tried a different liner in them. I talked to one shredder with these same boots and he said he struggled with the liner comfort too but once he put in different liners, he found his happy place.

Dissent Socks, help you pick the perfect thickness as your boots pack out.

Overall, the Freedom RS 130 is a quality boot that I’m looking forward to using for several years. I’ve owned 3 pairs of Scarpa touring boots over the years (Denali, Skookum and now the Freedom RS 130’s) and I know from experience that Scarpa makes a quality product that lasts a long time.

If you’re old and washed up like me, then the 130 may be too much boot for you and you may want to consider the Freedom SL 120 or the Maestrale RS 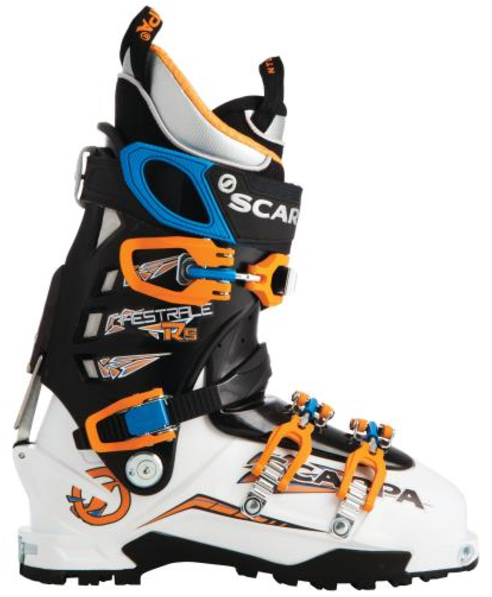 The Maestrale RS is probably the boot I’d rather have.