UPDATE: The conditions appear to have changed a lot with the heavy winds. Three separate slides yesterday: http://www.piquenewsmagazine.com/whistler/whistler-search-and-rescue-issues-public-warning-after-multiple-avalanches-cause-injuries/Content?oid=2635827#.VKLniy8RG8U.facebook

Well, it appears that we’re having another weird and wacky year out here on the Coast. We’ve weathered a couple Pineapple Expresses that have left our valleys dry and our high alpine caked with otherworldly snow formations.

The general consensus for a lot of people around here is that we’ve had a terrible season so far. This couldn’t be further from the truth, so long as you’ve managed to stay above 1800 metres. The shredding in the alpine has been absolutely BANANAS for about six weeks now.

With this in mind, we headed to The Duffey (or #uptheduff as we like to call it) on Sunday for our first day of shredding up there all season.

We debated objectives on the way up and eventually settled on checking out the Cerise Drainage, citing the fact that travelling up the valley would save us from bushwacking our way through any sort of forested shoulders. The plan worked well enough, and we found ourselves at the decision point between Vantage Col and the Cabin Ridge after about 1.5 hours of travel.

We tried to keep this kinda action in mind when we decided where to go for the day….

Travel’s definitely a little pushy, as care must be taken to avoid routefinding through interlocking stands of trees. But once we got high enough (almost to treeline) we found ourselves tromping around in a nice fat snowpack.

We’d hoped to dig a pit and:

-see how deep the snowpack was…

-evaluate the presence/reactivity of a layer of a surface hoar, down 60-100 cms, that has been plaguing forecast regions across BC and AB…

Unfortunately the clouds started rolling in and, as is too often the case, we skipped the pit and pinned it towards our objective.

We hopped on a couple rolls at the top of a North-facing tree run, which is where the nasty layer is said to be present, and didn’t get any movement. Nor did we see any activity from previous shredders who had been riding in the area.

And we chose an alpine line that we hoped would have been blown clear of those whorish crystals.

In spite of all that, we certainly had stability concerns on our chosen line, especially with the hasty nature of our assessments along the way… 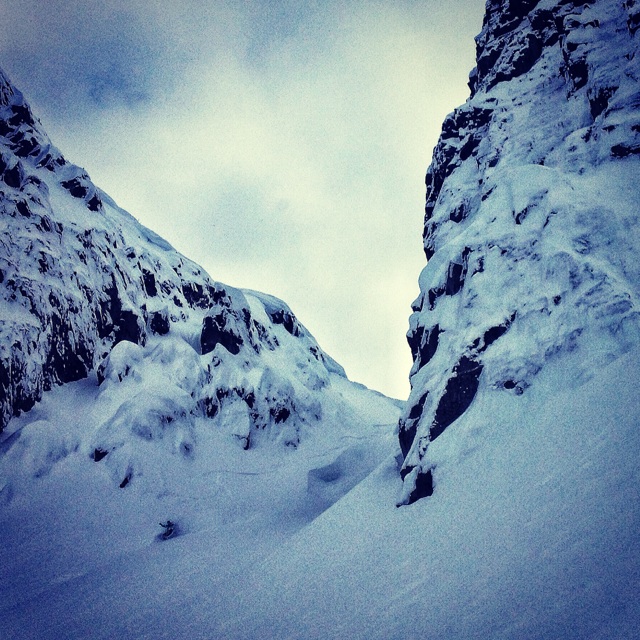 We didn’t get any movement on this north-facing line, but the forecast does warn of a surface hoar layer buried on north aspects around treeline. This line’s actually not as high as it looks, so we were still concerned, especially with the presence of a large cornice spanning the majority of our entrance.

We felt comfortable with putting the weight of a rider on the slope, but we were concerned with the fact that our line was guarded by a massive cornice that’s not usually there.

If that beastly wind formation had busted off and landed in the start zone, we felt there was a decent chance that the slope would slide. So we (both snowboarders) scootched up on the high skiers’ left of the line and did our best to leave the sleeping dragon undisturbed.

She let us in and we shredded about 40 cms of undisturbed pow the whole way down (from roughly 2000m down to about 1600m).

We’d both ridden this line before and agreed that we’d never seen in it in such spined-up conditions. And we’ve talked to a few people who are reporting similar formations in the high alpine gnar. 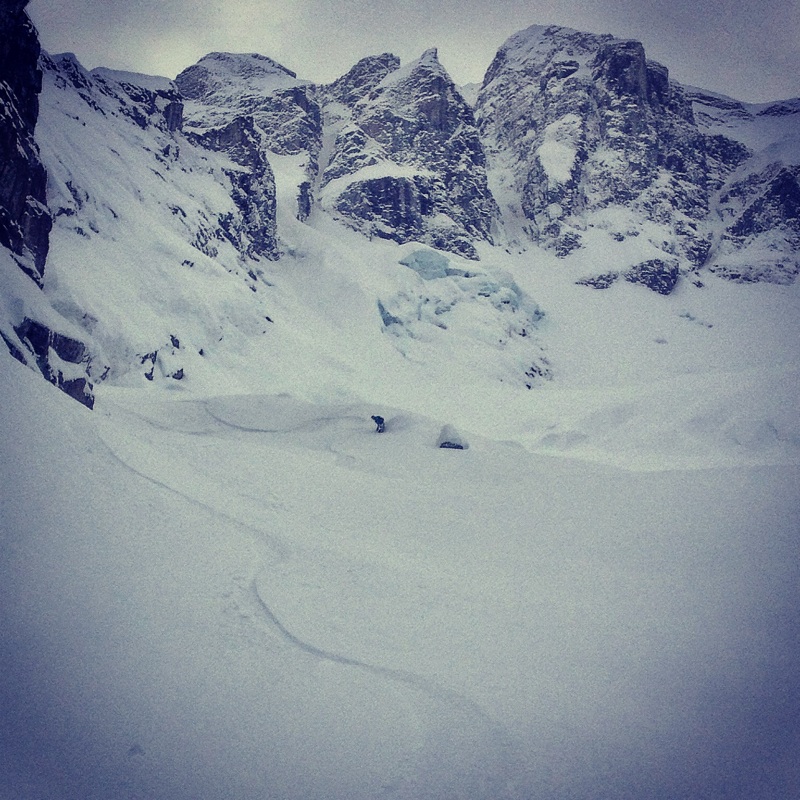 Caught a look at a couple of Coastal classics on the way out.

Our original plan had been to lap back up and shred a line through the trees. But after the run we’d just had, the abnormally tight lines looked uninspiring enough to call it a day.

Don’t get me wrong. There would have been good skiing up higher in the trees. And they’re shaping up enough to warrant shredding them on a super cloudy day. But the truly mindblowing shredding is happening in the alpine these days.

The forecast is calling for clear skies, strong north winds and the arrival of a temperature inversion in the high alpine, so it will be interesting to see how that pans out. As of Sunday, every aspect we encountered in the Cerise Drainage was holding good snow, so we should still be able to sniff out some cherry turns in the next couple days.

Either way, enjoy yourselves and keep it safe out there.

Please keep in mind that these simply the observations of a backcountry recreationist. Always consult the local avalanche and weather forecasts. Keep an eye out for special warnings and always be aware of changing conditions and variability between regions.

Oh, and here’s link to a more high alpine forecast, albeit from a slightly different region: http://www.whistlerblackcomb.com/the-mountain/snow-and-weather/index.aspx?t=alpine-forecast1#tabsa