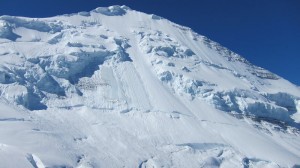 Every spring Chris Rubens and Eric Hjorleifson get back to the Rockies for a mission. Our trips are usually failures on the ski side but fun on the hanging out/camping/drinking sides. Often we end up talking about bigger peaks we should have failed on instead and how we’ll be radder next year. The North Face of Clemenceau has been the one line that we seem to have spouted off about the most. 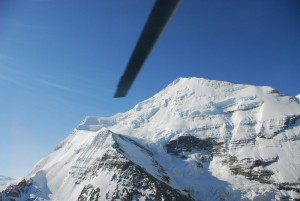 Alpine Climbs in the Canadian Rockies tells us that the first climb of Mt Clemenceau’s N Face was done in a 16 day round trip with no “air assist”. We are clearly skiers and not climbers and I only had 3 days off work, so I convinced everyone we should go heavy on the “air assist”. 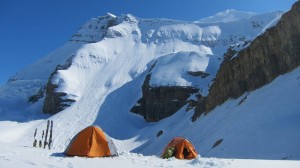 Martin Lefevbre had just been past the area two weeks earlier on the Great Divide Traverse (what a spring he had!) and came back to work at Sunshine Village saying he’d come check out Clemenceau if we ever did that trip we’d been spraying about FOR YEARS. I emailed Eric in Italy and he said yes with no hesitation (crazy life he lives!). Chris on the other hand hadn’t skied for a month and wasn’t feeling real confident about it all. Chris and I had talked about it forever though, so I just pencilled him in and ignored everything he said.

We’d hoped to make it a three day mission but the weather didn’t work out Friday, so we sat at the heli port for 12 hours then camped by the river hoping to just fly in a day late and still find a way to make it happen.

Saturday was clear luckily and we flew around 10am. Our camp was right below the lower face so we scampered up it (700m) to look at the hanging glacier and our route and to get some turns. The snow was great and we all got back to camp happy and laid out on the rocks to sunburn for the afternoon. It actually just felt like a vacation at this point. 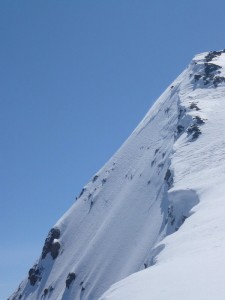 Then reality set in and I couldn’t sleep at all. At 2am we woke up and knocked off the bottom face in the dark. We brewed up and snacked at the bench before committing to the traverse below all the seracs and through the glacier. 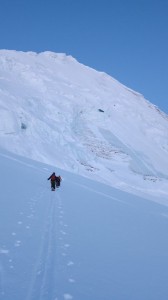 We had brought a rope so we pretended to know how to use it while Chris crossed the bergschrund. Then Eric charged up the face kicking steps in his super light/rad Dynafit gear that made us all jealous. Martin took over as we roped up for the upper bergschrund and led us over an ice bulge which was Chris, Eric and I’s first actual ice climbing experience (fun stuff!). 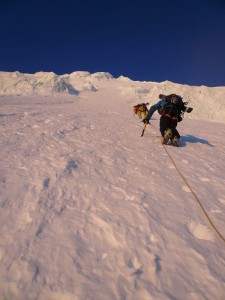 At the top the guide book tells you to climb right and gain the ridge but we were scared shitless to traverse under the overhanging serac/cornice/gargoyle thing so Martin found a gap between the ice that led us almost to the peak. We called it the N Face Directismo because that sounded pretty climberish. We then had to climb a little ice bridge over the exposed east face to get to a fun ridge walk to the top. 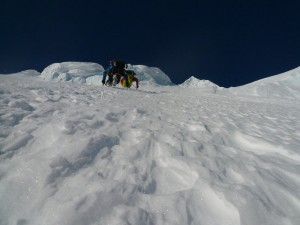 After making sure all 10 helmet cameras were working, we clicked in on the peak and made a few turns down to where I was going to set up a rappel for the corner/bridge manoeuvre. Then Eric called me a wuss, so we just left the rope in the bag and all made the one important turn/drop to get back to the north face. 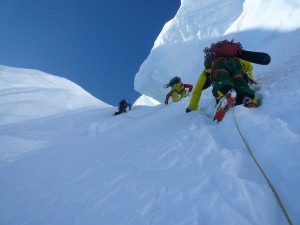 The top 10 turns were quite steep, then it mellowed to just steep for the top half. Down in the ice it mellowed to 45 degrees and less down by the lower bergschrund (800m from the peak). We then had to run scared across the traverse while looking up at hanging seracs again. 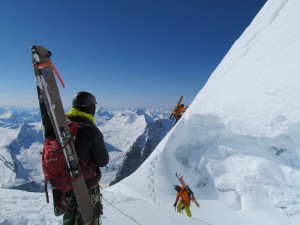 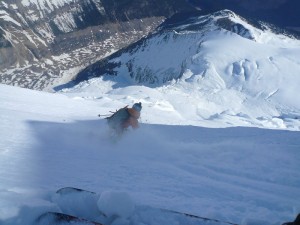 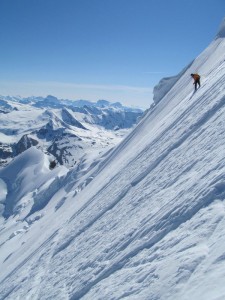 On the bench we celebrated/bragged/took photos and watched a serac fall avalanche dust our traverse track. Finally we picked lines down the lower face and skied great snow down to camp where we packed up and got drunk waiting for the helicopter to pick us up at 3pm. 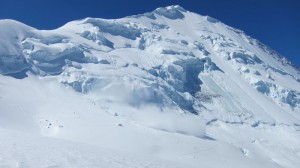 2200m of bootpacking/skiing and one cool summit in a 30 hour trip. Nothing like the first climbing group’s trip, but we sure had a blast and some great skiing. Spring break 2012 in the Rockies! Kevin Hjertaas