I’m not a father (not knowingly at least), but I imagine it would take some soft conditions for me to comfortably lob a newborn child off of a debatably sendable cliff. 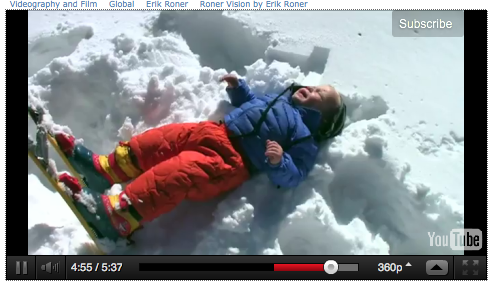 And given that Jesse Collings was one of many competitors under the age of 18 at this year’s Kicking Horse’s Wrangle the Chute, he certainly didn’t have the luxury of test-poodling his 70-foot-air with a young, linen-swaddled infant. Luckily, the resort’s mountain safety team roped off the venue and let 90 cm’s of storm snow build up in there, so this year’s comp offered up the kinda cushion that would make you feel comfortable tossing a small child off any of the venue’s available features. 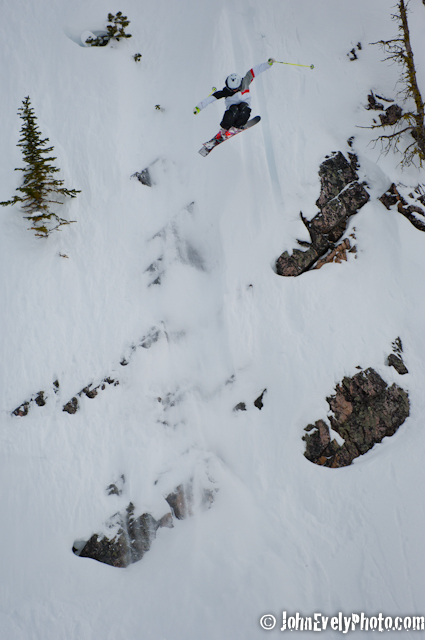 Logan Pehota styling through the bones on his way to victory

Collings captitalized on that cushion on day one, sending an air at the top of his line that might have knocked his teeth out on any another given day. Indeed, the conditions lined up to turn the North end of CPR ridge into a battleground of big mountain freeriding. Snowboarders, skiers, ladies and men put in a solid show for the huck-hungry spectators. 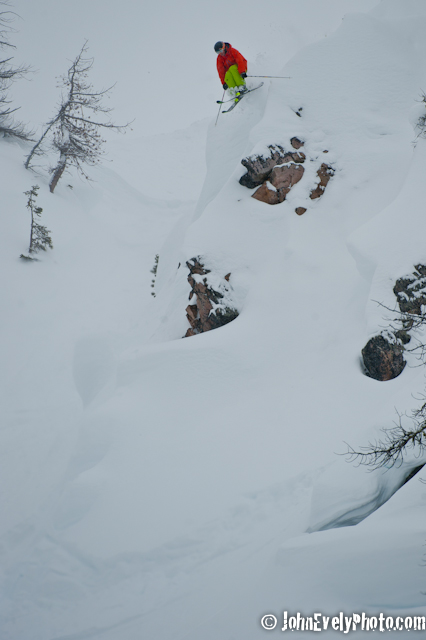 With the conditions as amazing as they were, I think that a lot of us watching were thinking that we should have entered the comp. I know I did, but once I saw how much the competitors were laying it on the line, I found myself perfectly content swilling Pilsners and spinning the occasional lap on the Stairway to Heaven Chair.

It was on one of these laps that I heard a ruckus erupt from the crowd and looked over just in time to enjoy a cross-valley angle of Davis Fultz inching his way to “The Treadway Cliff” and sending a stylish 50-footer into the pow. As far as I know, he’s the first snowboarder to ever hit that monstrosity of an air. Stomping would be a strong word for his landing, but the guy rode away cleaner than anyone else in the comp (hence his place atop the podium).

There was some grumbling about the fact that there was no man-made kicker at the bottom of the venue this year. Historically, competitors have had to point it towards a 25-foot gap after making their way through the gnar up top, but with Kicking Horse’s recent sale to RCR, the latter company’s policy put the kybosh on the kicker this year. That proved to be alright though, because it gave riders a chance to hit more features on the way down instead of pointing it from half way down the venue to keep their speed for the gap at the bottom.

Local snowboarder Dave Booher probably wouldn’t have spun the air that he did had the jump still been a part of the course. On the first day, he slayed a few pow turns down one of the treed ribs up top before setting his edge and stomping a Backside 720 off one of the cliffs near the bottom of the venue.

“I think the event really got stepped up this year,” said Whistler’s Logan Pehota, who took home the win for the men’s skiers at the ripe age of 17. “Skiing-wise, there was a lot of really good technical lines getting done, and the event planners made a good choice letting younger skiers in like Jake Teuton, Jordy Kidner, Jessy Collings and Ben Evely. It really showed how good the up-and-coming skiers are.” 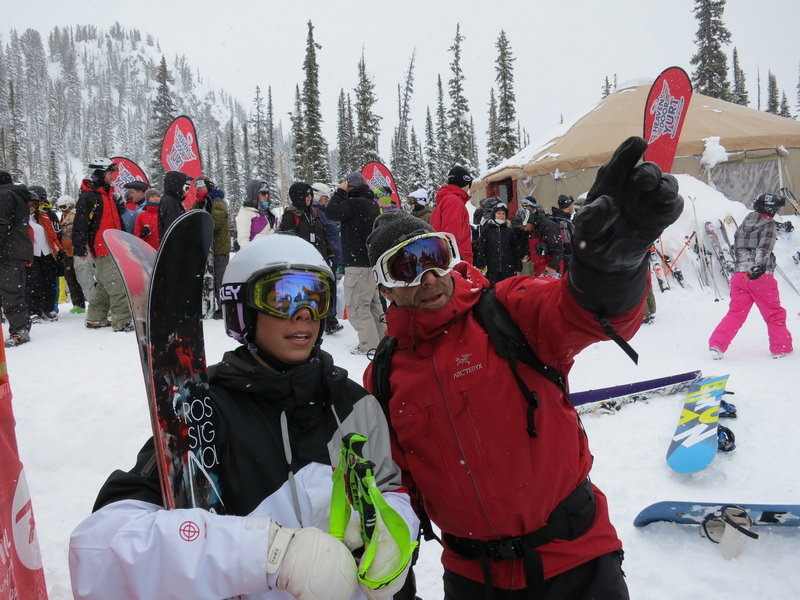 Eric Pehota, talking his baby through the huck

Logan’s got a hell of a coach in his corner. With his dad Eric helping him scope out his lines, he picked a couple of hairy ones and skied them strong, smart and safe. “Yeah, that last line was pretty scary,” he recalls. “But I thought I had to do it to stay in running with the top guys and I ended up coming out on top.” 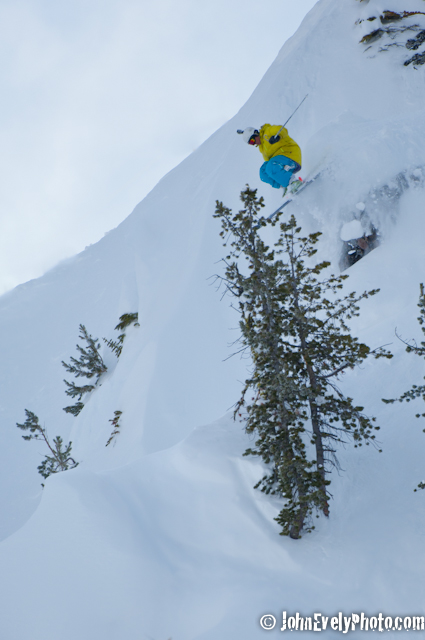 Roy Mitchell wrangles his way through the gnar

The field was exceptionally young this year, but one of the best stories from the weekend was about the competition’s oldest shredder, 33-year-old Tim Collins.  Hailing from just south of Golden, Collins has always been known for skiing that borders on psychotic. He put down two first-evers in the comp this year. On day one, he was the first guy to hop his way through the exposure and find one of the only clean take-offs into Slipknot, the diagonal band of snow that just barely makes its way through the otherwise unskiable Hairy Cliff area.

Or wait, maybe the Hairy Cliff is skiable, because that’s what Collins did on day two. When he started making his way skiers’ left of Slipknot towards the true fall-line of the precipice, spectators watched with vicarious trepidation and the ski patrol readied themselves for what could have been a very messy rescue. But Collins nailed it as well as anyone could. Even though his ski popped off at a critical point, he was able to click it back on, hop from one bony patch to the next and send a 60-footer into a steep, pow-filled transition at the bottom of the cliff.

NOBODY has done that before.

Unfortunately, Collins was disqualified because the judges’ interpretation of Freeride World Tour rules dictated that skiers who lost their skis during their run were to be disqualified. It didn’t really matter though. Collins will go down in the history of the comp as the guy who shattered everyone’s perceptions about what can and can’t be skied. 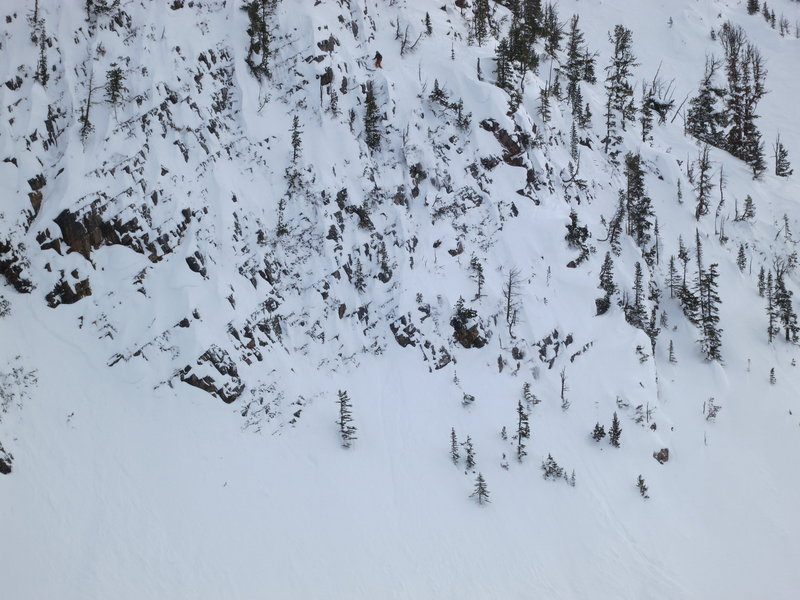 Tim Collins looking poised in the midst of impossibility

Not everyone was so lucky as Tim. Sure, there was pow all over the course but the Horse is still the Horse and a few competitors got snagged on rocks and rag-dolled through the bones. Matt Ruta, who was in first place after day one, skied last on day two and punctuated the event with an absolutely sickening crash. He got hung up skiing towards the Slipknot zone and tomahawked through the exposure, clipping a wall of rock before being spat out onto the fan. He fractured his scapula in the end, which is fairly minor considering the violent nature of his fall. 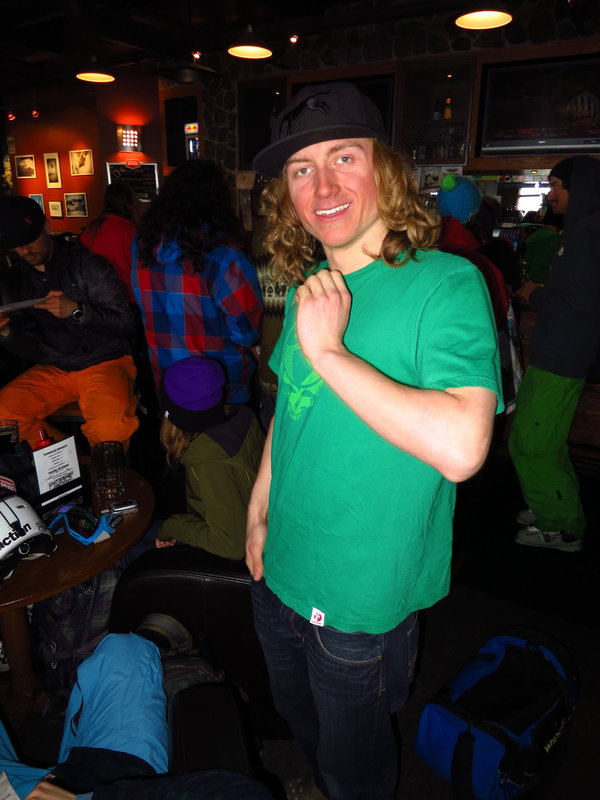 Matt Ruta – Day 1 Champ at Wrangle the Chute 2012: Just found out he was in first place after day one

As is always the case, the girls showed their big mountain bravado and kept the spectators entertained. Calgary’s Julie Thomas skied into first with a stylishly smart couple of lines. Also from Calgary, Aleta Corbett kept it nice and consistent and took second place. She’s been on an absolute tear this year, placing well in every contest she’s entered.

So what does this competition mean for Golden? The Freeride World Tour was happening at the same time in Snowbird, Utah and you can guarantee that a lot more tuned into that more high profile event. So it’s cool to think that at the same time there was a grassroots event happening in our own backyard that showcased some of the best freeriding that’s ever gone down. Golden’s always been on the map as an epicentre of Big Mountain riding, and with a comp like this happening, that reputation for progressive riding will be more solid than ever. 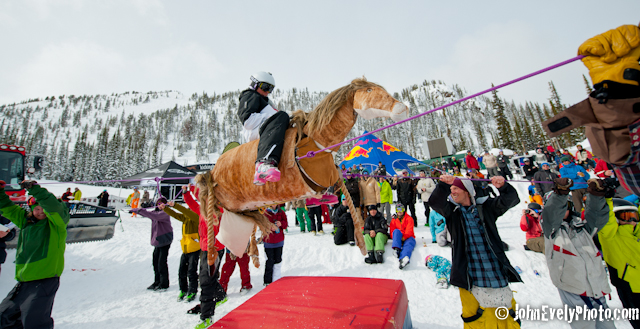 It’s a funny thing. When the venue’s blanketed in epic pow, you’d think things would be easier on the competitors. But when you’re dealing with the kind of snow you could toss a baby into, it puts the pressure on the athletes to huck themselves that much harder. This weekend saw the kind of shredding that people will be talking about for years to come, and that’s the kind of thing that makes freeriding move forward.

Big Thanks to KHMR, the judges and the Mountain Safety team for making it all go down. 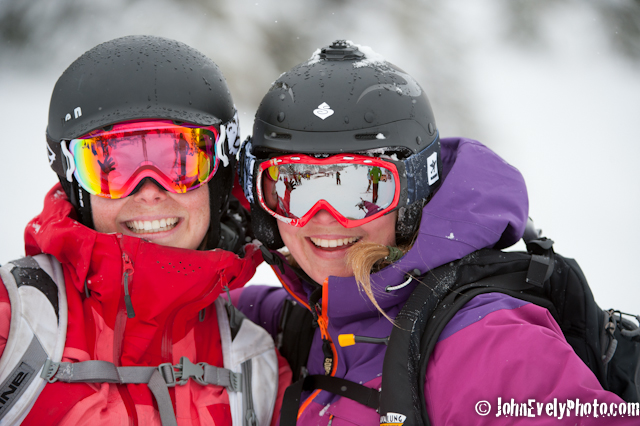